Vets Honored at Restaurants as They Reminisce

WARREN, Ohio – On Veterans Day yesterday, some restaurants served veterans a free meal to show appreciation for their service. And for some of the veterans, the gesture is a stark contrast to the way they were treated decades ago.

As Richard Roberts finished his lunch Monday at Sunrise Inn downtown, he recalls how different the sentiment toward veterans was when he first came home to the United States in 1967. Roberts served three tours of duty in Vietnam with the U.S. Army between 1963 and 1971.

“It was the first time I ever experienced being called names, like ‘baby killers,’ and we had eggs thrown at us,” he said. “We had to take our uniforms off in order to come home.”

“To have people come up and shake my hand makes me cry because we didn’t have that back then,” he said. “Now 12 or 13-year-old kids stop and thank me for my service. People don’t understand how that makes you feel.”

Roberts was one of many veterans to enjoy lunch at Sunrise Inn on Veterans Day. “To have someone appreciate what we did and give us a little reward is wonderful,” he said.

For the last three years, the Sunrise Inn has offered free meals to veterans on Veterans Day. The manager of the restaurant, Bobby Miller, came up with the idea as a way to give back to area veterans. Miller is an Army veteran himself and served in Berlin from 1990 to 1993.

“I come from a long line of military people in my family. My grandfather served 35 years under General [George] Patton in World War II, my dad was in Vietnam, my mom served in the Army,” Miller said.

On Veterans Day, which was observed Monday, any active-duty military member or veteran with a valid ID could eat one free meal at the Sunrise Inn. Miller estimates more than 3,000 free meals have been served since beginning the tradition.

Earl Parthemer enjoyed lunch at the Sunrise Inn, along with five other veterans, who are all members of the American Legion Post 540 in Cortland. 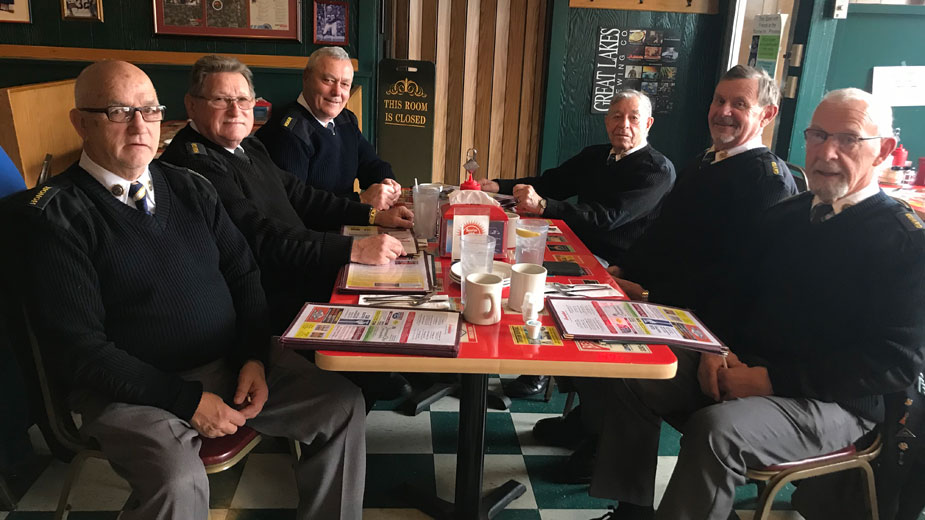 Pictured: Earl Parthemer, seated on the right, eats lunch with fellow members of the American Legion Post 540 out of Cortland.

Parthemer served in the Air Force in Indiana and Alaska from 1961 to 1966.

“It’s great that they honor the veterans today compared to what it was back in the Vietnam era,” Parthemer said, who shares a similar story to Roberts. “People didn’t look upon the veterans coming out of Vietnam as well as they should have.”

Parthemer dines at the Sunrise Inn often, but Monday was special.

“The specialty of it is that they are honoring the veterans,” he said. “Each veteran is entitled to something so it’s a great idea to add this free meal.”

Another regular customer, Bob Kosinski, said he usually comes in for breakfast on Sundays, but to celebrate Veterans Day, he will have a cheeseburger for lunch.

Kosinski served as a personal specialist in a tank battalion in the Army from 1958 to 1960 in Germany.

“I really appreciate it and I’m sure every veteran who comes in appreciates what they do,” Kosinski said of the Sunrise Inn. “It’s something great and they’re helping people out. They appreciate what the veterans have done.” 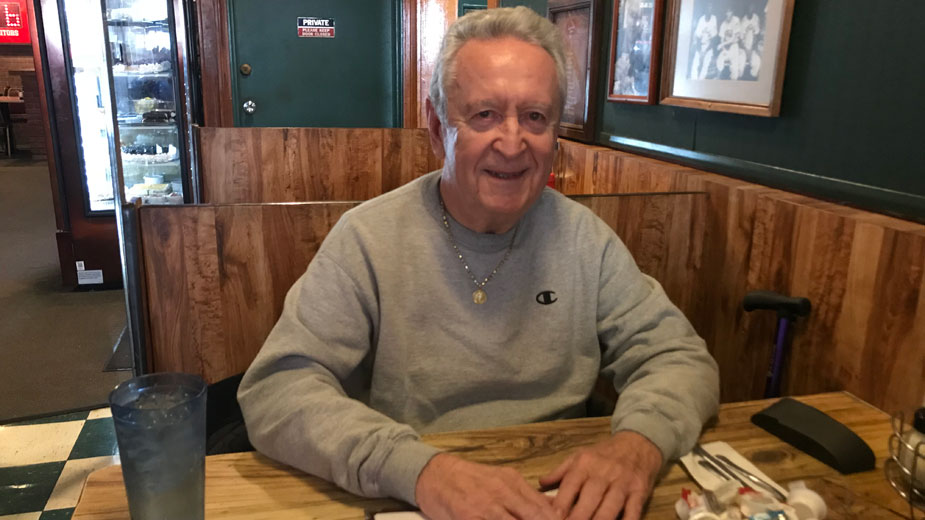 “Mr. Covelli has always been a huge supporter of veterans and his dad was a veteran too,” said Ashlee Mauti, director of marketing for Covelli Enterprises. “In 2011, we started doing the free meals and it went over very well with a large outpouring from the community. They’re so thankful we started doing this.”

At Panera, veterans were able to receive a complimentary You-Pick-Two meal, and at O’Charley’s, a $9.99 entrée or $10 toward any entrée of choice. On Veterans Day, many veterans will go to Panera for lunch and O’Charley’s for dinner, Mauti said.

“They’re very gracious and they’re so thankful,” she said.

Since Covelli Enterprises started the campaign in 2011, the company has given 126,000 meals to active-duty service members and veterans. Last year was the first year Covelli Enterprises exceeded $1 million in food and monetary donations on Veterans Day.

Throughout the year, Covelli Enterprises raises funds to support veteran organizations through different initiatives. Among the local organizations are the Marine Toys for Tots Foundation and Disabled American Veterans. Through the end of November, local Panera Bread Cafés will be accepting donations at the register for these organizations.

“It’s not only on this day, but all year round that we feel we need to give back to those who served,” Mauti said.

Pictured at top: Richard Roberts of Warren served three tours in the U.S. Army in Vietnam between 1963 and 1971.