Taking Development to the Land Bank

YOUNGSTOWN, Ohio – From the front of his business in Campbell, Bill West gazes across McCartney Road at an abandoned, dilapidated building on the other side, weeds choking its small parking lot.

It’s not the future West envisions for his property, nor is it the legacy he wants to leave for others looking one day to set up shop here. Instead, the owner of West Extrusion Inc. plans this year to paint his building, line the front of his lot with peach trees – some already planted – surrounded by mulch and remove the heavy brush from the five parcels next door that he recently acquired through the Mahoning County Land Bank.

“This is the first property you see when you drive into Campbell from Youngstown,” he says. “I feel it’s my responsibility.”

West’s project is just one example of how the Mahoning County Land Bank is broadening its reach as an economic development tool that stands to help not only blighted neighborhoods, but to boost the vitality of commercial corridors in the Mahoning Valley. In some cases, the land bank’s role has made the difference in the creation and retention of jobs and businesses that otherwise would have relocated.

“We’re getting encouragement from parties to be a player in economic development going forward – not as a developer – but in a supporting role,” says Debora Flora, executive director of the Mahoning County Land Bank.

In the case of West Extrusion, the company manufactures plastic trim components used mostly in the recreational vehicle market, a booming segment of that industry, West says. His biggest challenge is finding the room to expand his business, and he doesn’t have enough land to accommodate a new addition on an old building. West’s only option is to scout for another site in the region and relocate.

“My thought process is that I need to make this land and building more attractive to someone who can come in and buy it,” West says. “I want to make it more attractive for another company to come in.”

Among his first efforts was to acquire five empty lots 100 feet deep along McCartney Road directly west of the plant and that stretch to nearly the end of the block. Once he determined that the land bank owned the parcels, West sought to buy them for his own redevelopment plans.

“It was easy,” West says, as he looks at a portion of the cleared land. “It took a little longer than I planned, but I did some paperwork and gave them a deposit.”

After several months, West took title to the property and now intends to improve the entire stretch of McCartney Road from Courtland Avenue to Lettie Avenue.

Meanwhile, he has plans to construct a small, drive-thru coffee shop on the newly acquired land bank property. “If this area looks nice, it raises the value of other properties here,” West says.

Flora says one of the priorities of the land bank is cleaning up some of the gateway corridors that lead to the county’s cities. “We want the gateways to look better and make them more attractive to any number of investments,” she says. Normally, the organization would not take title to an industrial or commercial property because such parcels often are encumbered with contamination or remediation issues.

Instead, the land bank focuses on properties – mostly residential – that can be landscaped and returned to productive use. “It’s all about revitalization of vacant abandoned property,” Flora says. “There’s a lot of energy going into residential concerns” related to the demolition of vacant structures across city neighborhoods.

But even residential projects can have a lasting impact on jobs and economic development, she says.

Just more than a year ago, Solid Platforms Inc., a scaffolding and platform supplier on South Avenue in Youngstown, was searching for a solution to expand its yard because its business was rapidly growing. The company inquired about some of the vacant land to the rear of the company and reached an agreement to acquire it. 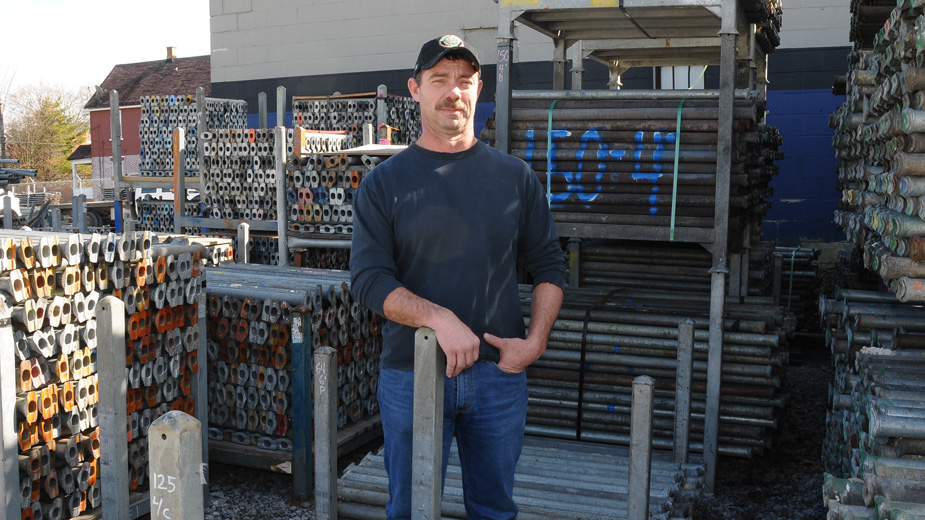 Cubby Rose is the superintendent at the local office of Solid Platforms, which expanded on parcels acquired through the land bank.

“Our business has grown 200% over the last three years, and we needed more land adjacent to us,” says Jason Lammertin, president and CEO of Solid Platforms, based in Portage, Ind. Fortunately, the land bank held title to the parcels and the company negotiated the purchase of the vacant lots to accommodate Solid Platform’s expansion.

“We ended up doubling our footprint at the same location to about two acres,” he says. The land was vital to the business’ operations because the yard holds tens of thousands of scaffolding pieces and has additional space to accommodate heavier truck traffic.

“If it wasn’t for the land bank, we’d be looking for another location,” Lammertin says, which would leave another building along the lower South Avenue corridor vacant and the relocation of 30 to 60 jobs from this part of the city. “We would’ve been strapped.”

The Mahoning County Land Bank – its official title is the Mahoning County Land Reutilization Corp. – is a nonprofit community corporation whose objective is to take control of tax-delinquent, blighted properties and restore them to productive use. Often the work requires demolition, but in some cases the land bank has acquired structures that have the potential to be rehabilitated. It works with municipal and township governments, community groups, religious organizations and nonprofits to help assemble and prepare land for new development.

Among the more high-profile developments the land bank collaborated on over the last several years is Joseph Co. International’s $20 million Chill-Can project on the east side of Youngstown, spearheaded by Mahoning Valley native Mitchell Joseph. “We met with Mitchell early on in the process,” Flora says, “and he defined the area where he would want to build.”

The site consists of roughly 22 acres bordered by Oak Street to the north, Himrod Avenue to the south, Lane Avenue to the west and Fruit Street to the east. Once the perimeters were identified, the land bank began to research the status of the vacant properties, Flora says.

“In many cases, the owners were deceased or could not be located,” she says. “We looked at tax delinquency and used that as a tool to request tax foreclosure to bring them into our inventory.”

“We transferred 85 properties, half of the footprint Mr. Joseph needed to begin construction,” Flora says.

Construction has started at the site. When finished, the multi-building complex will manufacture self-chilling beverage cans and accelerate research and development on transferring the chill technology to other applications. Once fully operational, the campus could employ more than 250 on the East Side.

“Mitchell Joseph’s project was very educational for us. We were at that for 18 months,” Flora says. “We’re happy it turned out the way it did.”

The Joseph project could open more opportunities for the land bank to assist economic development endeavors on the East Side, Flora says.

The Albert Street corridor, for example, is a prime location for future suppliers or businesses related to the Chill-Can project.

“It’s something we should look at,” Flora says. “What are the opportunities there?”

Flora emphasizes that the land bank’s most notable impact has been in the neighborhoods where residents have benefited from the demolition of vacant, blighted houses or acquired vacant adjoining properties that they then landscaped and beautified. 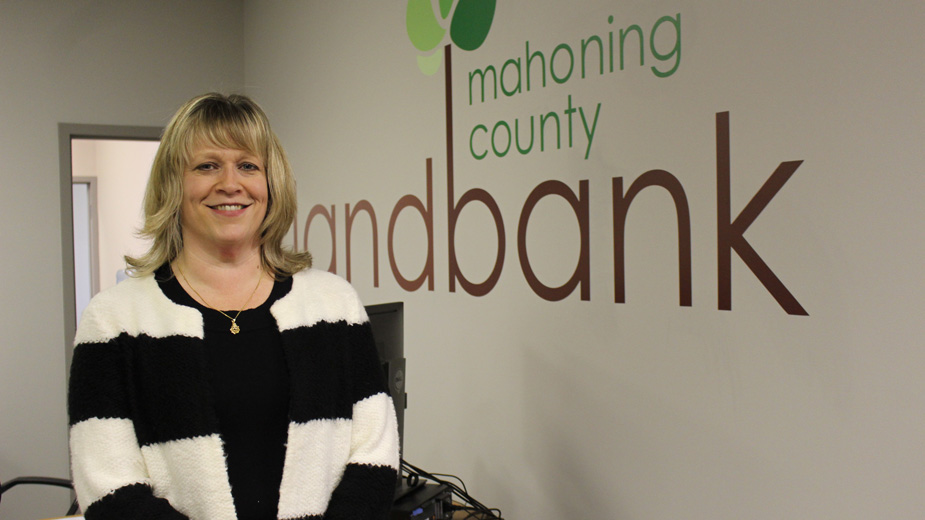 Most activity is concentrated in the cities, Flora says, and there are 500 vacant houses targeted for demolition in the land bank portfolio. “We’re on track to complete 400 demos this year,” she reports.

Most of these demolitions and land bank acquisitions are in Youngstown, Flora continues. “You’ll find concentrations on both sides of Crandall Park, both sides of Mahoning Avenue, the Idora neighborhood, and the Sheridan Road-Powers Way-Loveland area,” she says.

The communities it serves alert the land bank to problem properties and vacant structures, Flora says. Neighbors or local government officials are asked to compile a list of blighted structures that pose big problems for an area. “If they want us in a particular neighborhood, then we’ll bear down on that front,” Flora says. The land bank assesses issues such as tax delinquencies. “It’s the most expedient means to get it done,” she adds.

The land bank, for example, has acquired more than 60 properties since March 2015 and another 32 are in various stages of acquisition. Thirty-eight structures have been razed since and another 29 were scheduled for demolition last month and this month.

The effort is part of a three-year program to eradicate blight in targeted areas of Youngstown and assemble land near the central business district, which city officials hope will pave the way for future commercial development.

For others, the program has helped to rid eyesores that neighbors felt posed a danger.

“There was an abandoned home next door to my parents with vagrants living in it,” says Diana Esparra. “We were concerned about a fire and we inquired at the land bank.”

Esparra and her husband contacted the land bank, she says, found that the organization had title to the property and began the steps so her parents could acquire the next-door lot with the intent on improving it.

“My parents’ safety and security is first and foremost,” Esparra says. “They made it so easy and walked us right through the process.”

Anyone interested in acquiring a land bank property must first fill out an application, Flora says, to address questions such as the intended use. Once the paperwork is complete, the land bank vets potential buyers to determine whether they have a record of any code violations or have blemishes such as delinquent taxes on other properties.

Once cleared and a price is agreed on, a property could transfer to the new owner within a couple of weeks, she says.

Today, where an eyesore once stood is a neatly landscaped garden filled with several varieties of trees. In the summer, flowers such as daffodils and lilies crowd the mulched property. “It’s exceeded our expectations, Esparra says. “It looks so nice now, more pleasing to the eye and welcoming.”

Pictured at top: Bill West’s company acquired five lots from the land bank, which he believes is “my responsibility” to improve.