Tattoos Move into the Mainstream

YOUNGSTOWN, Ohio – As soon as you set foot inside State Street Tattoo, you’re surrounded by wall-to-wall art. From floor to ceiling are flash sheets covered with sample works ranging from robots to hearts to Elvis to cars. A few are designs from guest artists, but most are designed by owner Brandon Mohr.

To your left are portfolio books of the staff artists, next to a trophy case filled with awards the tattooers have won at conventions. There are sample fonts and even more flash sheets in a small lounge set up for clients waiting their turn. There’s an old B-movie playing on the TV, muted to make way for the rockabilly soundtrack heavily inspired by Brian Setzer.

All of this is done, Mohr says, to make the shop in downtown Salem accessible and open to everyone.

“Tattooing always had that stigma and it’ll always be sort of an underground thing,” he says. “We’re trying to take that away and show that you don’t have to be into drugs to be a tattoo artist.”

Thanks to TV shows such as “Ink Master” and “LA Ink,” tattoo shops in the area have seen their clientele expand. No longer are tattoos only in the realm of sailors and bikers. Among the customers area shops have served are: bankers, teachers, mechanics, lawyers and pastors.

“One of my best customers is a superintendent. He’s covered and you wouldn’t know it unless he took his shirt off. You see religious tattoos, family tattoos, everything,” Mohr says. “It’s not just gang members and drug addicts any more. It’s anyone and everyone.”

That increased interest has meant more work for tattooers as well as more competition. When Mohr got his start, he recalls there were three shops in about an hour’s drive. Now, there are dozens throughout Mahoning, Trumbull and Columbiana counties. All that’s required to start a tattoo parlor in Ohio is certification from the state Department of Health.

“There are no artistic requirements at all. It falls under cosmetology for the department of health,” explains Aaron Chine, owner of The Box Gallery in downtown Warren. “The building you’re in needs to be licensed through the local board of health and have a million different things [such as] bathroom access, hand-washing stations and sharps containers.”

It’s for that reason, he continues, that he suggests anyone considering a tattoo – or even one from a shop you’ve never been to before – to give it an “eye test” and examine both the shop itself and the artist’s portfolio.

“Artists only put their best work into portfolios, so you better really like what you see,” says Bitter Hearts Tattoo owner Ian Simon. “If you have a gut feeling and you can really envision it, then absolutely follow through. It’s all about pursuing the right artist, being safe and getting the quality you want.” 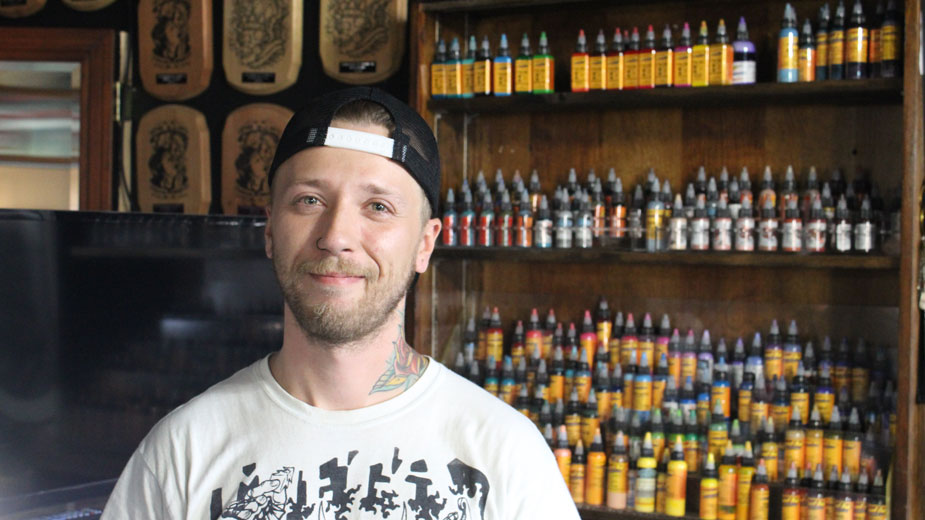 Safety, meanwhile, is at the top of the three shops’ checklists. Needles are all single-use and often come sterilized in blister packs. Artists use Bactine and other chemicals to keep equipment clean. Even the skin around where a tattoo will be inked is shaved and disinfected before any work is done. Some artists, including Simon, frequently travel to conventions and seminars and pick up on even stricter health requirements.

“Places like downtown Chicago and Orlando are very strict. We bring that here so we can protect our people and clients,” he says. “You want to do things right. You want to keep things legitimate.”

Mohr goes as far as having the final say on what equipment artists at his shop use. With the rise of online shopping, it’s easy to get needles, ink and cartridges from around the world. An important caveat to that, he says, is that also means not everything is up to snuff.

“We will not let them use any of the cheap needles or inks. … A lot of stuff can be contaminated,” he says. “The big thing is cartridges that are pre-sterilized. They’re tube and needle all together. The FDA doesn’t regulate needles or inks, so these companies go through facilities that are certified by the FDA.”

On top of that is a sometimes years-long apprenticeship where artists spend their time learning the ins and outs of the trade.

“I worked seven days a week for five years as an apprentice – tattooing, piercing, anything I could – to learn and make my way up the ladder,” says Mohr, who opened State Street seven years ago. “I’ve just now gotten to the point where I can take time off.”

After taking a licensing test, the artists have to educate themselves on “first aid, CPR, bloodborne pathogens [training] to stay on top all the new codes and everything that can come up through the tattooing process,” Chine says.

Continuing education is also found at conventions, many of which feature seminars hosted by supply companies and industry experts.

Those conventions also provide a chance for artists to show off their work and open up new avenues. Simon, for example, was invited to Ink Fusion Empire, a group focusing on pop culture tattoos. The group is licensed to do Star Wars tattoos through Lucasfilm.

“It’s nothing too crazy. It’s a lot of bragging rights and through Ink Fusion Empire, we get to do cool stuff, like working the Star Wars Celebration, where we have exclusivity for [tattoos] at that,” he says.

Internally, tattoo parlors are required by state law to keep records on “the color, manufacturer and lot number of each pigment used for each tattoo performed,” as well as weekly sterilization tests for all equipment.

Going through these processes, the three tattooers agree, has an impact on prices. State Street goes through four cases of paper towels per week and keeps scores of needles and inks on hand. They also need to cover basic business needs such as rent and Wi-Fi, as some design software requires an internet connection.

“We’ve been doing tattoos long enough that I know what it costs in supplies per tattoo. We add that to the cost of the tattoo itself,” Chine says, noting that the average tattoo is around $200. “We have it worked down to about $30 per tattoo for supplies, rent and those costs.” 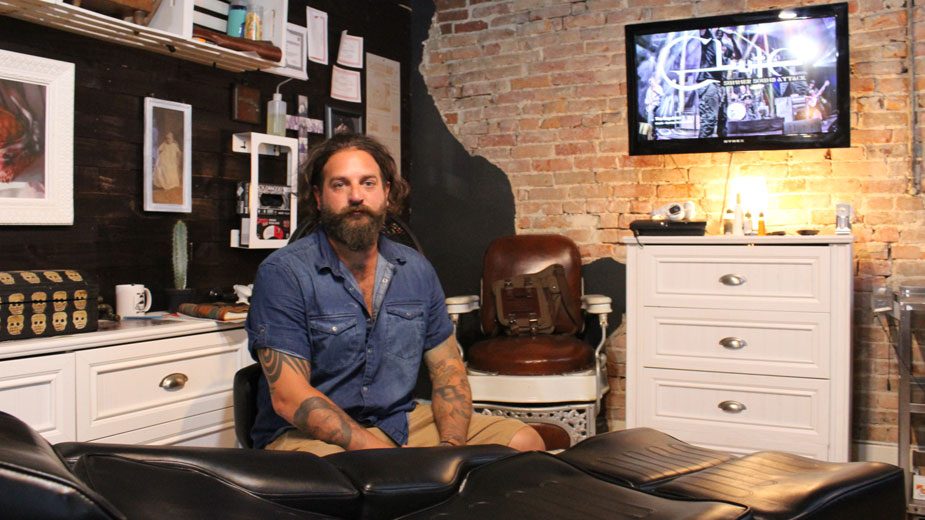 Because of that, virtually every shop has a minimum price to ensure there’s some profit on every piece of work. It usually ranges between $50 and $100, depending on the area.

Also factoring into the cost equation is the art itself, which has far less tangible cost than a bottle of ink or box of paper towels. Through the whole process, Mohr says, it’s the hardest part of setting prices.

Each artist has his own style, ranging from traditional – think of the old-school tattoos with bold lines and just two or three colors – to incredibly detailed, photorealistic pieces. Simpler pieces are generally cheaper, as more realistic works require more layers of color and attention to detail and shading.

Also factoring in to the cost is where on the body a piece will go.

“If you get one on your arm, the image is that size and that size only. But if it’s on your ribs or lower back, those are stretching areas. It can double in size,” Mohr says. “So it’s not only harder to get tattooed in those areas, but the tattoo is bigger. What may be $100 on your forearm may be $200 or $300 on your ribcage.”

There’s also the matter of creating the piece itself. With the advent of social media platforms – the trio point to Pinterest and Instagram in particular – customers are bringing in works they like. Recreating other artists’ work exactly is frowned upon, though shops will throw in their own details, using the original as a foundation.

Other times, a customer may come in with a general idea and leave it up to the artist to come up with a final design. It’s also common for them to come in with references.

To determine the price, it all comes down to how much time is spent arriving at the final work.

“Like any other job, it’s about the time you put into a project. If someone comes in with something fairly simple that only takes a few minutes to draw up, you won’t charge for [the artwork],” Chine says. “But if someone comes in wanting an entire sleeve without really knowing what they want, where you invest days and weeks just into drawing, that’s where a lot of the price comes in.”

That’s also part of the fun, they say: taking something from concept to art to tattoo.

“I’ve been a doodler my whole life and it’s so much fun to sit down and draw something up,” Simon says. “Every day is a new thing. Even if I’m just drawing up a skull and a rose, each day there’s a different idea.”

That’s not the only thing they agree on. The No. 1 rule for first-timers, they say, is to do your homework.

“Go into the shop and speak with them. Don’t just message them on Facebook. Don’t be lazy. This is on you forever,” Mohr says. “Do the footwork, find an artist and make an appointment so they can draw up something beautiful that’s original to you.”

Pictured: Before he opened State Street Tattoo in Salem seven years ago, Brandon Mohr spent five years as an apprentice learning the trade.