LORDSTOWN, Ohio – It wasn’t that long ago that Randi Weingarten and the American Federation of Teachers were part of a campaign to save a plant from closure after executives announced the company was “taking decisive action to curtail uncompetitive” manufacturing done there.

In a city of about 10,000 people, 487 jobs were to be eliminated when the state’s largest manufacturing employer announced it would idle one plant and close another after aluminum prices fell drastically.

But workers, union leaders, state representatives both in Albany and Washington – including Senate Minority Leader Chuck Schumer – and the community rallied together and pushed the company to keep a plant open. The result: Alcoa signed a contract with New York to keep one of the plants open for 3 1/2 more years.

It happened in upstate New York, Weingarten told the crowd at Lordstown High School Thursday night, and it can happen in northeastern Ohio. The key to such an effort, she told the audience of teachers, students, families, union members and elected officials, is collective action.

Were the General Motors Lordstown Complex to be closed permanently, the effect would stretch well beyond the 1,500 workers there today, said United Auto Workers Local 1112 President David Green.

“It’s all the people those workers touch, whether it’s at other plants, barbershops, grocery stores, the churches,” he said. “All these are built up around the plant, so when those people are gone, those businesses have no one to support them.”

And the teachers at area schools, whether at Lordstown or Austintown or any other district in the Valley, are part of that collective push that is the Drive It Home campaign. 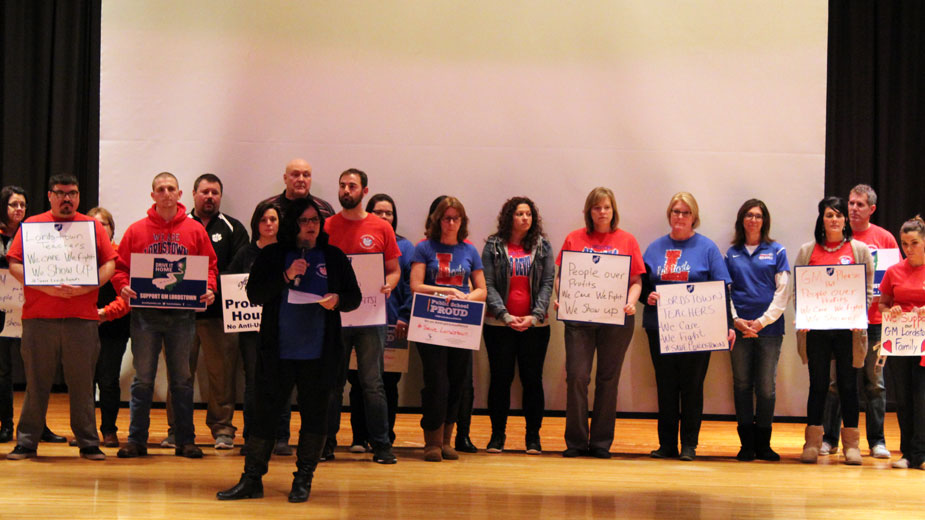 Lordstown Schools’ Alyssa Brookbank was among those from the Lordstown Teachers Association speaking in a show of support for the Drive it Home Campaign.

As part of the event, teachers from Lordstown Local School District talked about the impact the potential closure – GM has said it will cease production of the Chevrolet Cruze in March, but has not assigned another model to the Lordstown Complex – has had on them and their students.

“No matter what happens, whether or not you have family that works at GM or one of the companies that are part of this, your kids are saying goodbye to family that have to transfer,” said Mindy Moyers, a Lordstown teacher. “These kids, at the end of the school year, aren’t going to want that end to come. They’re saying goodbye to friends whose families have had to make horrible decisions over Christmas break.” 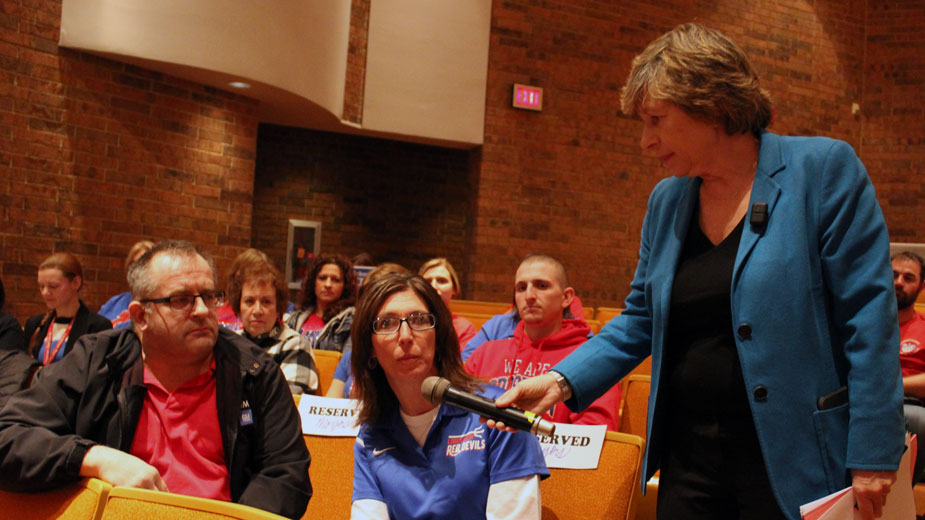 Jim and Mindy Moyer spoke about the impact GM’s decision has already had on those in Lordstown.

Students in all grades are worried, other teachers and student speakers echoed. If their families aren’t working at the GM plant, then their friends’ families are. And with that is coming anxieties about who’s leaving and when, what the future holds at other schools in other states. It’s on everyone’s minds, they agreed.

As a 19-year veteran of GM Lordstown, Moyer’s husband, Jim, pushed back against the idea that the automaker couldn’t succeed in the Mahoning Valley. The plant was ranked as GM’s best in North America by J.D. Power & Associates, he and Weingarten noted.

“We’ve given abatements. We’ve given up jobs, union positions. We give back to GM as much as they give us and now they want to take everything away,” he said. “At our last meeting, a topic was brought up called ‘Lordstown culture.’ I’m part of Lordstown culture.”

For 50-plus years, the workers at Lordstown have brought that work ethic with them, Green and Weingarten said, and when that’s combined with the 2008 federal bailout, investment in the plant is owed.

“This is a corporation that has made boatloads of money and can make a decision to retrofit for a product consumers want. They can do it in Lordstown, just like they made an old Saturn plant [in Spring Hill, Tenn.] able to build Cadillacs,” Weingarten said. “A company like GM has a special responsibility because they faced the precipice in 2008. … They were helped by the workers of the United States of America.”

After the Drive It Home campaign’s appearance at the North American International Auto Show in Detroit last week, there hasn’t been any update on the status of the plant outside of Gov. Mike DeWine saying the meeting between his team and GM leadership including CEO Mary Barra was “positive” and that he came away “optimistic.”

Lordstown Mayor Arno Hill at Thursday night’s event said he doesn’t expect much news out of Detroit until negotiations start between the automaker and UAW in September.

“It’s a very difficult situation because it’s an unknowningness, right? No one knows what’s going to happen. I’ve got members waking up every day wondering, ‘Should I stay? Should I go? Should I got back to school? Should I move to another state?’ ” the UAW’s Green said. “It’s hard to make a plan for your future when you can’t see all the cards and the company isn’t showing us all the cards.”

Within the State House, Rep. Michael O’Brien, D-64 Warren, said there’s been work across the board to convince GM to assign new product to Lordstown.

“We’ve been working with the Speaker of the House, the lieutenant governor and the governor, who’s been very involved,” he said. “We’re asking for a retrofit. If they’ve got cars that are selling, bring them to this community. We have a proven track record of building a quality car for the past 50 years.”

While other uses for the plant have been floated – Elon Musk said in a 60 Minutes interview that he’d consider purchasing the plant for Tesla and others have suggested putting in new manufacturing uses if GM does leave – Weingarten said those ought to put behind retrofitting the plant.

“Middle-class jobs have formed the backbone of this community for a very long time. GM owes a responsibility to look at all alternatives, including retrofitting, not just closing and transferring people,” she said. “Every time you transfer someone, you are creating another cut to the community.”

Pictured: Randi Weingarten, president of the American Federation of Teachers, led a town hall event for the Drive It Home campaign Thursday at Lordstown High School.

By BILL KOEHLERCEO, Team NEO CLEVELAND, Ohio – Team NEO accelerates business growth and job creation throughout the 18 counties of the northeastern Ohio region. As the designated JobsOhio network partner, we help connect companies to resources they need to…