YOUNGSTOWN, Ohio – As mergers and acquisitions consolidate credit unions, those that remain are enjoying membership and asset growth year over year.

Among them is the Mercer County Community Federal Credit Union, based in Hermitage, Pa.

“In the last few years, membership has been increasing and in the last three years, assets have increased dramatically,” says the credit union’s CEO, Sandi Carangi.

To accommodate the needs of the increased membership, area credit unions are offering new technologies and products while fighting regulatory battles.

“The reason why members are coming to us and we are growing is because we added new technology in the last few years,” Carangi says. “We were able to add mobile banking and we added that just two years ago and all the features that go along with it.”

The credit union, which has branches in Hermitage and Sharon, Pa., is expanding technology beyond its mobile app by adding new technologies at its Sharon branch.

“We’re adding on three additional offices to that branch and expanding the drive-thru because we’ve been growing so much,” Carangi says.

The drive-thru will have one ATM lane and two lanes featuring new video-screen technology, so customers can actually see the teller rather than just speaking into a microphone.

“It will be a bit more modern,” Carangi says. “It makes it more convenient for people to be able to connect with that person on the other side.”

The expansion is expected to be complete by the end of December. While the branch is under construction, members can still receive services through a mobile branch in the parking lot.

Since Struthers Federal Credit Union moved its branch from offices in the Struthers Plaza to a stand-alone building at 808 Poland Ave. in May 2014, Mary Jo Clark says she’s seen steady growth in membership.

“We have our own beautiful building now,” says Clark, assistant office manager at Struthers Federal Credit Union. “We’re that little engine that could.”

The credit union has seen an increase in auto loans and the use of Visa and debit cards. While it doesn’t have a mobile banking app yet, Clark says one could be in the works soon.

The credit union opened in February 1960 to serve employees of the Struthers school system. From there it started accepting city employees and students and became a community credit union.

Today the credit union works with businesses to recruit members and currently boasts at 3,600 members and $21 million in assets. Its largest payroll group is Astro Shapes.

“We have a real personal touch,” Clark says. “Whether it’s a $5,000 loan or $50,000 car loan, we spend time with members and educate them on what they can be doing to improve their credit history.”

Peter Catanese, director of marketing at Cardinal Credit Union, based in Mentor, says more business there is a direct reflection of the economy – more specifically, car sales.

“It seems like we’re attached to those industries where they do well, we do well,” he says. “We do a lot of car loans.”

“It’s still relatively low and isn’t going to stop someone from buying or financing a car,” Catanese says. “At this point rates are still a good deal.”

With eight branches, one of which is in Austintown, someone is eligible for membership at Cardinal Credit Union if he or his family lives, works, worships or attends school in Lake, Cuyahoga, Geauga, Ashtabula, Portage, Summit, Mahoning, Trumbull or Columbiana counties.

State leagues, such as the Ohio Credit Union League and the Pennsylvania Credit Union Association, keep credit unions informed on congressional legislation that could affect them.

One bill that recently passed, which Catanese has been advocating for, is the Economic Growth, Regulatory Relief and Consumer Protection Act.

The legislation rolls back reforms from the 2010 Dodd–Frank Wall Street Reform and Consumer Protection Act, which was put into place in response to the Great Recession.

The new law will make it easier for smaller credit unions to lend to its members.

“It makes our credit union more efficient because maybe we don’t need as many employees if we didn’t have this. So it keeps our cost under control and our members own the credit union, so they see the benefit any time we can reduce costs,” Catanese says.

“The last decade has been horrendous,” Soukenik says. “Legislative and the regulatory environment have put so much burden on financial institutions. It’s been very difficult for us and it’s extremely difficult for anyone smaller than us to pay for cost of compliance or technology to provide good service for members.”

Since the act was passed, Soukenik says there remain some unintended consequences from Dodd-Frank that have made it difficult for members to get loans and increase credit lines. He hopes new legislation will get rid of some of these and make it easier for 7 17 to help its members again.

7 17 Credit Union has seen membership increase to 84,000 and is increasing its number of branches to 13 with the addition of a new one in Canfield. It recently surpassed $1 billion in assets.

The Canfield branch is expected to open in the spring and will have video-screen technology in its drive-thru lanes.

The credit union is also building a new Larchmont branch. It is expected to open in the spring, and will be adjacent to its headquarters and current branch, and will offer the video-screen technology in its drive-thru.

Another part of the Economic Growth, Regulatory Relief and Consumer Protection Act that Soukenik advocates for concerns guarding against elder abuse.

“I’m amazed when I hear from our front line people that they see one instance a day, on average, where they feel somebody is being abused and we need to be able to report that and protect people’s privacy,” he says. “We need to make sure the correct action is taken.”

If this legislation passes, credit unions will be able to monitor and report suspicious activity when they believe an elderly person is being financially taken advantage of.

“There are a group of bad players out there who prey on those who are most vulnerable,” he says. “This is a regulation coming down that has a meaningful impact on some of our members.” 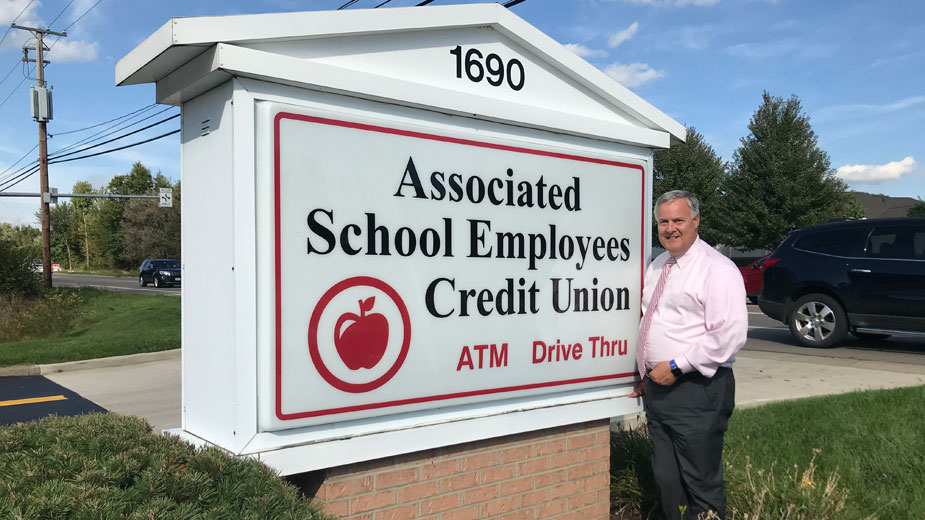 The Associated School Employees Credit Union has been in the Mahoning Valley since 1959 and has grown to 14,000 members, five branches and $133 million in assets.

Anyone who lives, works or worships in Mahoning, Trumbull or Columbiana counties is eligible for membership.

Kurish attributes part of his credit union’s growth to partnering with 33 local car dealerships to offer dealership financing for members looking to finance a vehicle purchase.

“When purchasing a car, the dealership will ask, ‘How are you going to pay for this?’ And will offer several options from financial institutions and they’ll tell you the rate for each institution,” Kurish says. “People recognize the value of the credit union and the lower rates that are available on car loans.”

The number of ways members can access Associated School Employees Credit Union has increased in recent years through the availability of online technology and the mobile app. Members can now apply for loans and open up new accounts online.

“For individuals who don’t find it convenient to visit our locations, they can do it on their own time schedules,” Kurish says.

But if members find they need assistance when applying for a loan, they can stop the process online and resume it inside one of the branches.

DEFIANCE, Ohio – Premier Financial Corp., the holding company for Premier Bank based in Youngstown and First Insurance Group in Ohio, announced Tuesday net income of $102.2 million for all of 2022, compared with $126.6 million in 2021. The company…