LIBERTY, Ohio – As a chain perhaps best known for its doughnuts, Tim Hortons is used to dealing with holes. Just seven years after opening, the Canadian brand introduced Timbits – doughnut holes, using the pieces of dough cut of its standard doughnuts – to its menu in 1971, helping popularize the breakfast snack.

But, more recently, there was a hole that the brand wanted to eliminate.

“They’re all throughout Canada, they’re in Erie, Columbus, Toledo and then Michigan. There’s a big hole right here in northeast Ohio and we thought that it was the right time to bring Tim Hortons to the area,” said Jeff Linville, president and CEO of TH Cleveland.

Linville joined staff and community supporters at the new Tim Hortons in Liberty Township, 3523 Belmont Ave., for an opening reception. The restaurant, offering a full line of coffee, drinks, breakfast foods and lunch items, will open for business at 6 a.m. Thursday. 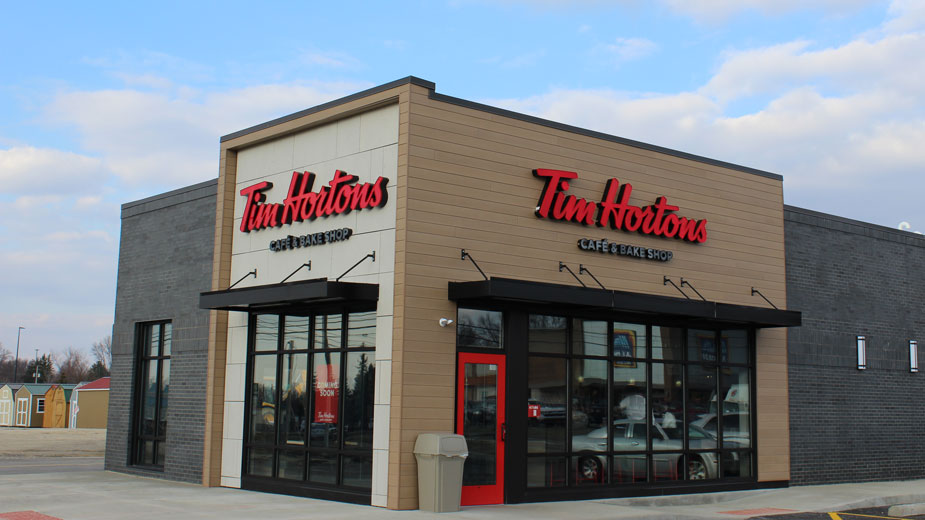 Part of what attracted TH Cleveland to this specific location rather than the traditional focuses of development in Boardman or Niles, said director of marketing Mandy Davis, was the traffic flow.

“We’d identified that back in 2017 and identified this as one of our first properties. There’s traffic in the right places and ways that we think Tim Hortons’ brand is something that’s really palpable around here,” she said.

The restaurant, which employs 52, is TH Cleveland’s first in the Mahoning Valley. There are two other Tim Hortons already here, one in Niles and another in Salem, although they are independently owned. Another is in Calcutta.

“They’re independent area developers for those solitary locations. They’ve been supportive of us as far as training,” Davis said. “Anything built within the Youngstown [designated market area] going forward will be our restaurant.”

And going forward, TH Cleveland has plenty in the works. A groundbreaking for a site in Girard is coming soon, Linville said, followed by another in Austintown once the franchisee finalizes the purchase of the property, Davis added. 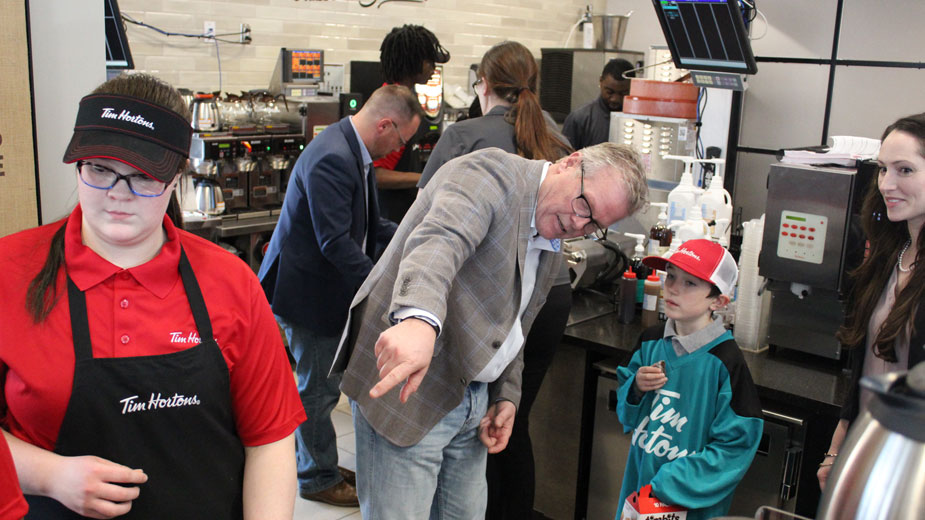 “We’ve got about another six that we’re going to open throughout the area. I can’t divulge anything but by the end of the year we should have seven in the area,” the president said. “This is just one of many.”

The new store, at the corner of Belmont Avenue and Goldie Road, is just one of the new developments along the corridor. Toward Youngstown, a new Rally’s is nearing completion. Looking north, Comfort Inn & Suites opened a new hotel just a few years ago, while the newly renovated Metroplex has found new life as a space divided between storage and an event center. And last year, repaving of Belmont Avenue improved the corridor’s infrastructure.

“This [property] was dilapidated and sitting for probably 10 years. It was an old gas station and really an eyesore. We’re really fortunate to have finished this shopping center [across Goldie Road],” said township trustee Jodi Stoyak at the reception. “I think that when you have a chain like this that’s very responsible for the outside, that can be a domino effect for others. That’s what’s most important of all, looking up and down the street and seeing good buildings, painted buildings, grass cut and things kept up.”

The opening reception was attended by staff and community supporters from Liberty schools and government. Since work first started on the Tim Hortons, Davis said, there’s been widespread support.

“The community has been wonderful with their outreach. A woman from [Home Savings Bank] across the street already came over and gave some gifts to our staff. It’s felt natural to be part of this community,” she said.

To celebrate the opening, TH Cleveland is making a donation to Blott Guy Elementary to help the school resurface its bathrooms, one of the first of many community support efforts, Linville said.

“We support children in everything they’re doing. We do a lot with sports, with soccer and hockey, but we want to get involved with the schools, whether it’s benefit nights here or just supporting them with coffee and doughnuts and food for organizations within the schools,” he said. “We’ve been working to intertwine ourselves with the schools, the police, the fire department and really become a part of this community.”

Pictured: Tim Horton’s staff and supporters cut the ribbon for the new restaurant in Liberty Tuesday. It opens at 6 a.m. Thursday.