LORDSTOWN, Ohio – Mayor Arno Hill is confident that voters in the village will support Village Council’s decision Thursday evening to back the Lordstown Planning Commission’s rezoning of about 300 acres of property to accommodate the proposed $160 million TJX HomeGoods regional distribution center.

At the same time, an opponent of the rezoning said he is more confident than he was a few weeks ago that voters will overturn council’s decision in a referendum expected to take place in August.

“Six weeks ago, I would not have given us a high probability of winning,” Brett Dickson said. “The more I learned, there were a lot of voters in Lordstown that don’t appreciate change being stuffed down their throat. I’m pretty confident if the voters get a chance to do this – and it looks like now they will – that we will prevail.”

On a series of 3-2 votes, with one member abstaining, Village Council last night accepted the planning commission’s recommendation May 8 to rezone seven parcels in the village where Massachusetts-based TJX wants to build the distribution center.

“We are pleased with the results of today’s Lordstown Village Council vote and are grateful to the council for its support of our proposed distribution center project,” HomeGoods spokeswoman Doreen Thompson said in an email following the meeting. “We wish to reiterate our deep commitment to being a good neighbor in Lordstown and having a positive impact on the community and look forward to continuing through the process to make this project a reality.” 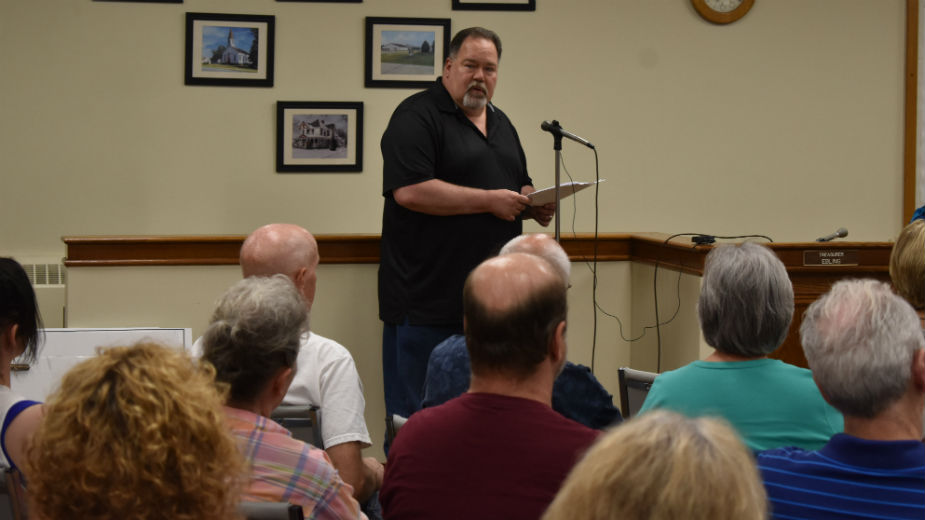 Pictured: Brett Dickson and other TJX opponents pledged a referendum to the rezoning.

The votes on the seven parcels came at the end of the meeting, which lasted about 75 minutes. More than 70 people packed into Village Council’s chambers as the legislation authorizing the zone change went into its third and final reading.

Before the public comments portion the meeting, Village Solicitor Paul Dutton read a letter received from TJX that day pledging its intent to grant a permanent easement or transfer the title to the buffer area it has planned for the property, permanently exempting it from development.

The letter also stated plans to create an earthen berm with an interior swale to address runoff issues and pledged that it would not seek village funds for an expected relocation of Hallock Young Road and would address at its own expense any required additional onsite water storage.

The audience represented a mix of TJX representatives; employees of the Youngstown/Warren Regional Chamber, which has worked with TJX for about two years; supporters of the project, about a dozen of whom wore bright yellow shirts declaring “Right Project, Right Property;” and opponents, many of whom urged TJX to locate its project on land already is zoned for industrial use and sought to counter the company’s assertion that it planned to be a good neighbor.

Those who spoke during the meeting in opposition to the rezoning outnumbered speakers in support of it by a ratio of seven to two. Many voiced familiar opinions against the project, including the availability of land already zoned commercially.

Others lamented how the issue has divided the village or criticized the process state lawmakers used to accelerate any referendum, low wages that the company would pay or reports that it had been investigated and fined for employing undocumented immigrants.

Kathy Dickson, who spoke after her husband promised that if council approved the rezoning that a petition drive for a referendum would be launched, warned that council members who voted in support of the rezoning could be held personally liable to any damages from flooding or other issues related to the project.

“Don’t be naïve to think that there won’t be damages,” she said, adding that she would be taking pictures of her property following the meeting and she advised others to do the same.

Supporters pointed to the need for jobs locally and noted the suitability of the acreage for industrial development.

“It sits on an industrial corridor and it should be used for what it’s designed for,” Shari Burchett said.

Following the meeting, U.S. Rep. Tim Ryan, D-13 Ohio, issued a statement praising Hill and Village Council “for doing their part” to advance the project. Ryan worked with company officials as well, and stepped up his involvement when it appeared TJX would move on from Lordstown in the face of community opposition.

“Today we reached yet another major milestone in what has been a long and arduous journey to bring TJX HomeGoods to the Mahoning Valley,” Ryab said. “We have all worked long and hard to make this project a reality.” He pledged “to do whatever it takes to ensure that this facility, with its thousands of jobs and millions of dollars in payroll and revenue, comes to our region.”

Sarah Boyarko, Regional Chamber vice president for economic development, said she is pleased with the vote. “Council understands the importance of this investment for not only their community but the entire Mahoning Valley,” she said.

Walt Good, senior manager of project management and site selection for Team NEO, said the “unwavering commitment” by TJX and the development team was inspiring.

“We are committed to doing all that is within our power to help bring this across the finish line,” he remarked.

Opponents now have 30 days to gather signatures for a referendum. House Bill 292 allows the village to conduct a special election Aug. 21 rather than in November’s general election, a delay proponents feared would cause TJX to abandon its Lordstown plans.

Mayor Hill predicted that village voters would uphold the zoning change “no less than 60-40 [margin].”

TJX will hold off on submitting its plans for site review until after the 30-day period to see whether there will be a referendum, Hill said.

Harvey Lutz, who owns 121 acres of property that TJX optioned for the project, also is confident that the rezoning will survive the referendum. He also said he believes village residents will come back together from the divisions that the debate over the rezoning exposed.

“Time heals everything. I don’t have anything against anybody here,” he said. There might be some bitterness initially, “but honestly, they’re still neighbors.”

Pictured above: More than 70 packed Lordstown Village Council chambers for the hearing.