LORDSTOWN, Ohio – Harvey Lutz will never build a chicken farm on 121 acres of land he owns in the village. He’s not disappointed.

“No, they’ll have to go to KFC, I’m sorry,” the third-generation owner of Lutz Farms offered in mock lament Tuesday night at Ross’ Eatery & Pub. “I’d just as soon be a buyer than a grower.”

A celebratory mood permeated the Tod Avenue restaurant and bar, which dozens of local officials, Lordstown residents and others packed last night to celebrate the results of the special election in the village that clears the way for TJX Companies to move forward with a planned $160 million regional distribution center to serve its HomeGoods store brand.

By a margin of about 3.5 to 1, voters up held the zone changes from R-1 Residential to I-1 Industrial of seven parcels of land totaling nearly 300 acres where TJX wants to build the 1.2 million-square-foot distribution center. The warehouse is expected to create 1,000 jobs when fully up and running. According to unofficial results reported by the Trumbull County Board of Elections, 52.53% of the village’s registered voters cast ballots in the special election, or 1,331 votes.

TJX did not issue a statement following the results. A spokeswoman said the company is waiting for the results to be made official before commenting 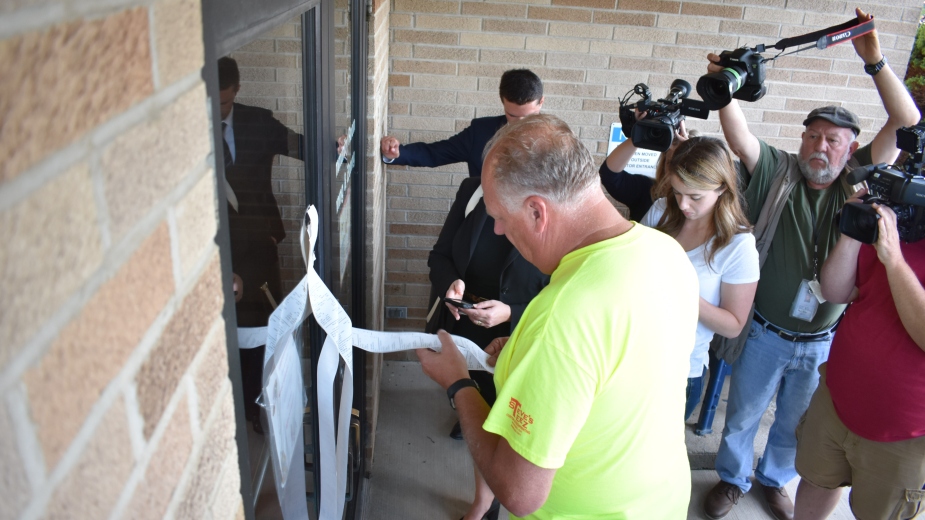 Lordstown Mayor Arno Hill reads the results of the vote posted outside the polls.

TJX has an option on the 121 acres where Lutz announced plans last April to build two 650-foot chicken barns when opposition to the land rezoning endangered the TJX project. After Village Council in June approved the zone changes for the seven parcels on a series of 3-2 votes, with one member abstaining, opponents successfully gathered enough signatures to put each of the zone changes up for referendum.

In an email Tuesday evening, Brett Dickson, a village resident who was among the opponents of the rezoning, expressed his appreciation to the voters of the village and for the turnout for the special election.

“Unfortunately, the vote did not go as we had hoped,” he lamented.

At Ross’ Eatery & Pub, supporters of the rezoning celebrated the win and looked forward to the next steps in the process.

“Not just Lordstown but the entire Mahoning Valley got behind this project and wouldn’t let it die,” said U.S. Rep. Tim Ryan, D-13 Ohio. Success came because of the cooperative efforts on the part of the village’s Republican mayor, Arno Hill; the business community; and Democratic state lawmakers.

“This guy [Hill] is a bulldog, and I would get in any foxhole with you any day of the week,” Ryan said. Members of the local state delegation “pulled a rabbit out of a hat” by getting state law changed to permit the referendum to take place yesterday rather than during November’s general election, which proponents feared would have endangered the project.

“In our heart of hearts, most of us that have been involved knew this was going to pass,” said James Dignan, president and CEO of the Regional Chamber.

“We’re pleased with the outcome,” affirmed Sarah Boyarko, the chamber’s senior vice president for economic development, who worked with TJX for more than two years.

“It’s quite obvious that the village residents saw the importance of not only the investment that they were voting about, but everything to come with regard to supply chain, service providers, maybe others that are looking at our market as well in consideration of investment,” Boyarko said.

Hill anticipates a groundbreaking within the next two months for the center, which TJX wants to open in 2020. Before the project moves forward, site plans need to be submitted for review, incentive packages need to be finalized and other details need to be addressed.

Lutz said the sale of his land to TJX should be finalized by the end of the month. The company already has core drilled the property. “They were pretty optimistic,” he said.

While pleased with last night’s results, Hill said he wants to see the village – which was divided over the rezoning issue – come together. TJX representatives will be coming in the next few days to meet with opponents to see how they can address their concerns moving forward.

“Hopefully they will be receptive and we can put this thing behind, us and our community can heal,” he said.

Scrappers Ask Valley to Step Up to the Plate

Brookfield Students Want to Be Passionate About Careers