Snap Circuits is a toy line from the Illinois-based Elenco Electronics Inc., which encourages children to “learn by doing” with its toy offerings rooted in science, technology, engineering and mathematics, or STEM. The Snap Circuits sets are among the most popular toys at Playthings Etc. in Butler, Pa., and more parents are showing interest, says its owner and manager, Nadine Shingleton.

“We call them ‘get off the couch’ toys,” Shingleton says. “Board games are huge. Science toys are bigger than ever, especially with the emphasis on STEM and engineering for girls.”

That interest is driving increases in sales for Playthings Etc., which were up 10% in October compared to the year before, Shingleton says. It suggests shoppers are beginning their holiday shopping early, she says, which she hopes indicates a strong season.

“Business has been brisk, which is good,” she says. “We’re encouraged by that.” 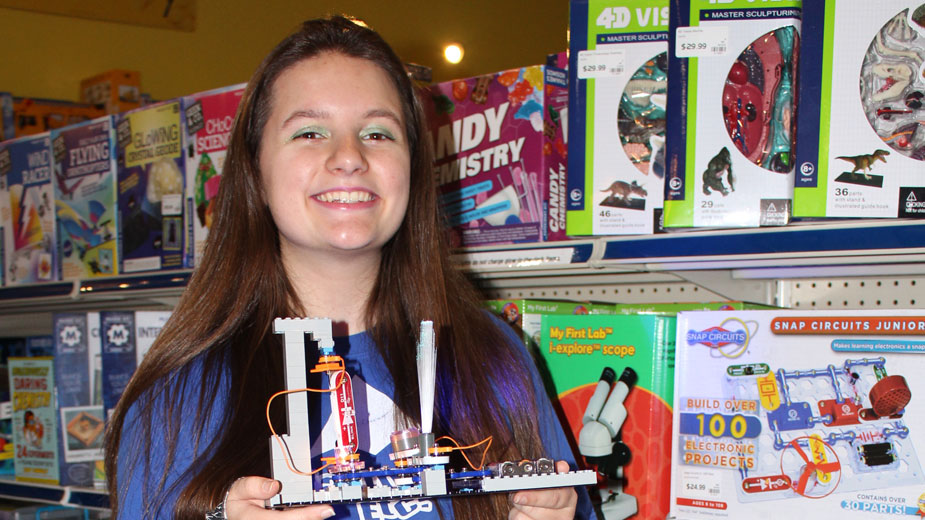 Other regional toy shops are reporting similar trends. Jeff Lyden, who co-owns Castle Toys and Games in Beaver, Pa., with his wife, Linda, says sales in 2017 were up 6% over 2016. And with customers coming from Ohio, he expects 2018 to be even better.

The Lydens are opening a store in Oakmont, Pa., bringing their locations to three. At press time, Lyden was hoping to have it open as early as Nov. 10. The main location is at 682 Third St. in Beaver, with another in the Pine Tree Shoppes plaza in Wexford, Pa.

“We like what we’re seeing in these small towns,” he says. “We think every small town needs a toy store.”

Staff at the Captain McFinn Gift Shop in the Eastwood Mall in Niles just finished restructuring the store, moving all children’s clothing to another store in the mall so they could expand toy lines and inventory, says Laura Giancola, multi-unit supervisor at Captain McFinn. Many of the new arrivals were showcased at the Fall Toy Preview of the Toy Association in Dallas in early October, including dress up, magic sets, science kits and puppets, which the Captain McFinn shop stocks in abundance.

“Parents really want interactive,” Giancola says. “Toys that the kids can not only play with, but maybe be able to use interactively with their family, with their siblings.”

However, youth electronics – which include interactive playmates such as Fingerlings and Tamagotchi – accounted for just $181.2 million in sales during those six months, according to reports by NPD. Outdoor and sports toys topped the list at $1.9 billion in sales, followed by dolls at nearly $1.02 billion and infant/toddler/preschool toys at $1 billion. Dolls represented the second-largest year-over-year increase in sales at 17%, followed by action figures and accessories at 16%.

The popular Calico Critters doll sets continue to perform well at the Captain McFinn shop, and Giancola expects the line to do even better following the Nov. 1 launch of a Netflix live-streaming series based on the toys. The manufacturer of the line of toys, Epoch Everlasting Play in New Jersey – a subsidiary of the Tokyo-based Epoch Co. Ltd. – released a line of Calico Critters exclusive to boutique stores as well.

“So it’s not something you’ll find in your larger stores, not something that you’re going to find online,” Giancola says. “When you come in, it’s all pieces that are unique and interactive so [children] can build the houses, they can use all the pieces, the little Calico Critters, everything they use for everyday life.”

RobotiKits and Snap Circuits engage kids to build the sets while teaching them STEM concepts, he says. Other lines allow kids to program a toy, teaching them coding basics. Lyden believes that giving kids engaging toys is the best way to get them to get away from the screens.

“Kids like what their parents give them,” he says. “If our parents are letting them mess around with digital stuff, they’ll just stay there. Because obviously screens are attractive.”

Encouraging interactive play over screen time is more than just a concern of the toy industry. In its 2017 The State of Play in America report, the Toy Association – a New York-based trade association – finds that play gives children the necessary skills to interact positively with others, manage emotions and “make sense of the world around them.” However, a panel of experts convened at the Children’s Museum of Manhattan that year found only a quarter of children get the recommended 60 minutes of physical activity daily, the organization reports.

Continued decreases in active play can be attributed to overly structured schedules, a competitive parenting culture, diminished recess at school and increased screen time, the report finds. The U.S. Department of Health and Human Services reports that children spend more than 7 1/2 hours daily in front of a screen, including television, video games and computers.

Castle Toys encourages kids to play with hands-on displays throughout the sales floor. From ride-on toys to musical instruments to wooden train sets, kids have a chance to try out the toys to see what they like. Parents like it too because they can touch and feel what they are buying, Lyden says.

Greta Price, a mother of five who range in age from two to 13, comes to the store often. She says Castle provides a family-friendly atmosphere that makes her comfortable to let her kids independently explore the store while she shops.

“I like to put my hands on what I’m purchasing before I purchase it,” Price says. “So I prefer shopping at a store. You can see what it is and you can ask questions about it.”

Since opening in 2005, Castle Toys has ordered its inventory specifically from small manufacturers, with the exception of Lego and Playmobil, Lyden says. Its two-floor Beaver store is stocked mostly with toys for infants to nine-year-olds, although older children and adults can enjoy the items as well, including board games and puzzles. Linda Lyden personally picks all items.

“She’s diligent about that,” Jeff Lyden says. “We pick things from all over the world. She has a particular interest in things made in the United States.” 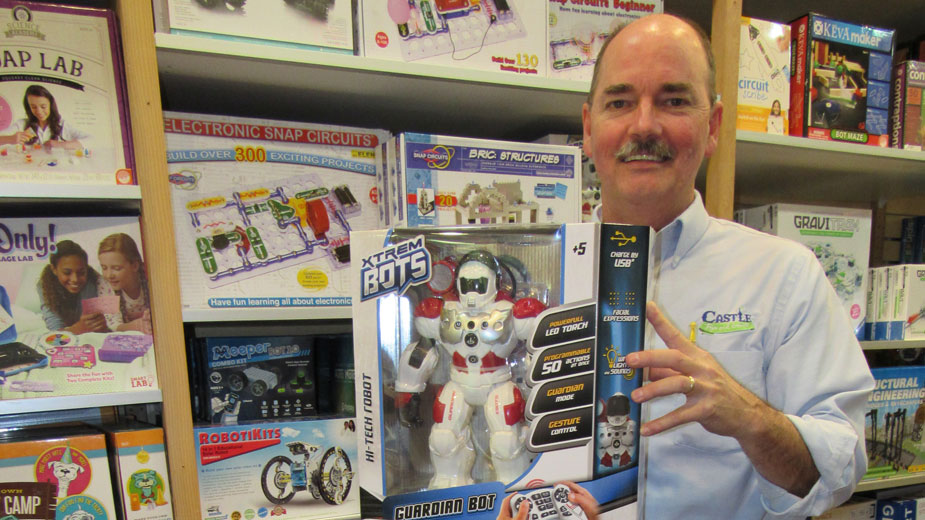 Certain products require a hands-on experience, says McFinn’s Giancola. Known for its stuffed animals and puppets, Captain McFinn keeps a wide variety of both that kids and parents can see, feel and touch, she says, including an entire section of unicorns, which are one of the most popular stuffed toys.

“You have ones that are hand-made, so you look at the quality of it. You’re looking at what the child wants and what would best work with them,” she says.

Interactivity is at the core of the Captain McFinn & Friends brand. What began as a series of children’s books written by Phyllis Cafaro, vice president of marketing at the Cafaro Co., expanded into her own social and emotional development brand and company. The gift shop opened in 2007 and is the only one of its kind.

“[Captain] McFinn & Friends takes a unique approach, by using the power of storytelling to engage children in pro-social learning experiences that entertain, inspire and change the world in which kids live,” Cafaro says.

In addition to toys, the shop hosts special events that coincide with the products, Giancola adds.

As more parents request interactive items, she believes the shopping experience should reflect that as well. Shopping at the store also gives families a chance to spend quality time together, she says.

“When you’ve got a store like this, or you have a boutique in the mall you’re able to bring your kids out,” she says. “You’re able to have fun with them in the store. You’re able to walk them through and see their reactions to different toys.”

Playthings Etc.’s Shingleton agrees. The stealth bomber-shaped store at 2483 William Flynn Highway in Butler, Pa., is packed with interactive toys “with high play value” that children can try in the store, as well as a section dedicated to remote-control vehicles and disc golf accessories.

“It’s a place to come in and try out toys and have a good time with your family,” she says. “And that’s what we’re all about. Our mission is to encourage families to play together and we want it to start while they’re here.”