CANFIELD, Ohio – Walk down the promenade of any fair – state, county, street, ethnic heritage or otherwise – and you’ll find yourself surrounded by brightly colored trailers that sell nearly every variety of food imaginable.

Hot dogs. Burgers. Italian sausages. Cotton candy. Pierogi. Fried you-name-it. All of it is found at fairs and festivals, peddled out of aluminum concession trailers.

“They’re loaded with lights and they’re big,” says Carl Carbon, sales manager for Trailex Inc., Canfield. “When you go to the Canfield Fair and your kid sees a giant hot dog [picture on a concession stand], it’s 12 feet tall. That gets you to go there and spend your money.”

Trailex manufactures aluminum trailers of all sorts – for cars, boats, kayaks and LED screens – but it’s the concession stands that draw the eye the most.

A finished trailer, with a fold-up cap on top that shields vents and an air conditioner while also providing some extra signage space, reaches up about 19 feet.

If the concessionaire decides to add flags up top, there are brackets to hold those too, add a few more feet to that total.

Building these trailers is a team of four that can spend up to three months on a single trailer. 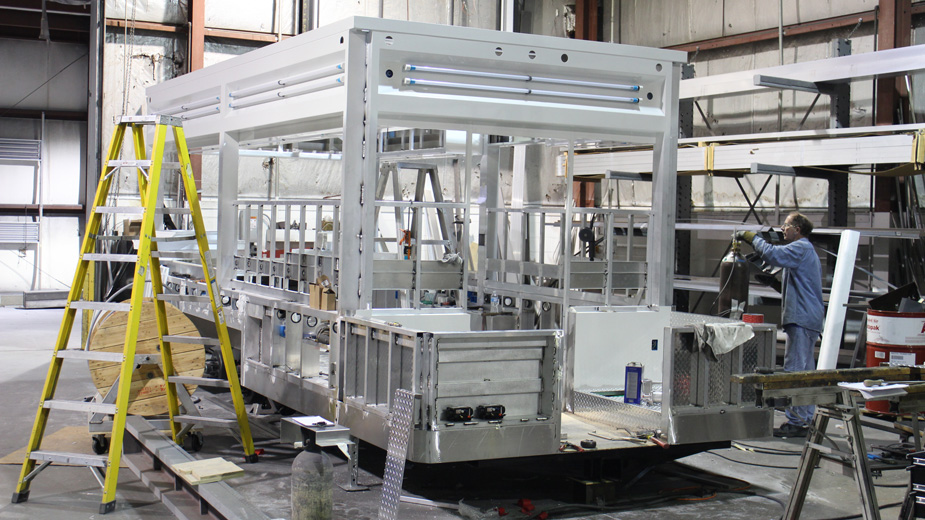 Pictured: A single concession trailer can take a four-man team up to three months to build.

“Depending on how complex they are or how big they are, it can range from 1,000 to 1,500 man-hours,” says shop manager Tom Nuttall. “They’re all-aluminum structures with a steel chassis. Aluminum walls, aluminum floors, aluminum roofs with an integrated gutter system.”

And “pretty much any option you can think of” is available to be built or installed by the Trailex crew, Nuttall says.

He recalls one project from a few years ago for a vendor who sold cinnamon rolls.

The trailer was 28 feet long and featured a backlit marquee along the sides. Inside were two 30-quart mixers and ovens. Underneath were retractable axles and auto-leveling hydraulic jacks.

“They get bigger and more extravagant with each one we make, it seems,” he says.

“There have been features we’ve added as we’ve gone along. We use trackless safety glass and the hydraulic corner jacks. … Each time we go, we make them a little bit better and every year we can improve on everything.”

Building a trailer begins with an aluminum frame in two parts: one for the body of the stand and another for the cap that sits atop.

Building the body is followed by electrical work for lights and appliances, including air conditioners, breakers and optional stereo systems, before the walls and cabinets are put in place.

“Then myself and another guy do the inside work, from glass to plumbing to Formica to stainless steel to pop machines to refrigerators,” Nuttall says.

Inside, the trailers feature the same equipment as a typical commercial kitchen, although with the caveat that the working space is far smaller and it has to be able to withstand thousands of miles on the road.

To keep cabinet doors closed, all are outfitted with gas shocks that stay closed unless lifted open and, once lifted, will stay in place.

“Everything on a trailer has to collapse and fold down for going down the road,” the shop manager says. “As a rule of thumb, we try to make teardown a half-hour process. The corner signs will come off, hang on hooks [in the trailer] and get pinned down. The awnings will close and roof sign will fold down nice and easy.”

For the appliances, concessionaires pick out the kitchen equipment they want and have it shipped to shop at Trailex, 1 Industrial Park Drive, west of downtown Canfield.

Once a trailer is finished, “it’s a complete turnkey operation,” Nuttall says. “The customer can come here to pick up their trailer and drive straight to the fair and start operating immediately.”

The concession trailers go all over the country, Carbon and Nuttall say. 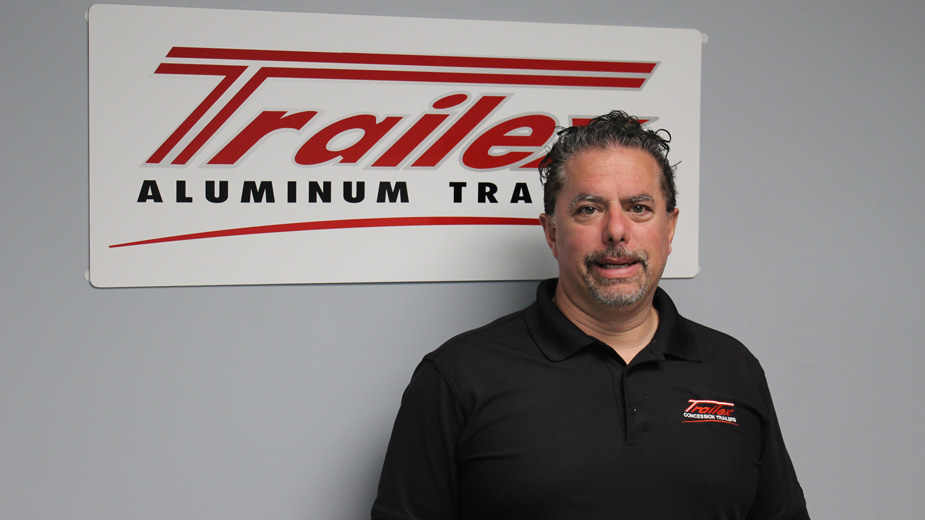 “This one is going to Wisconsin,” Nuttall says, pointing to an aluminum frame in which lighting is being installed.

“That one is headed to Minnesota. The next one will go to Texas and after that is one going to West Virginia.”

All of that work can run customers between $90,000 and $250,000, Carbon says, and there’s no shortage of buyers willing to put up the money for a new trailer.

Trailex builds about six a year and repairs or renovates the same number. The backlog has, in the past, reached two years. And buyers can be picky about what’s in – or even on – their concession stands.

“Some are very particular, down to the colors and percentages for tones and the way the doughnuts look,” Carbon says.

“They want what they want. And it’s a lot of money. You spend more money and time when you know it’s going to be there for years. You want it to be just right.”