YOUNGSTOWN, Ohio – For General Motors, Ford and Ram, the North American Internal Auto Show was a chance to show off their bigger and better models for the coming years. Trucks and SUVs took center stage for the three automakers, as did performance models boasting bigger engines and more power than ever before.

Ford Motor Co. showed off two updates to classic models: a redesigned Ford Explorer and an upgrade to the powerful Shelby Mustang GT500.

The Explorer – of which the hybrid and ST trims were highlighted, along with the new Police Interceptor Hybrid – is larger than its previous iteration and features an array of standard features including a 2.3-liter EcoBoost enginer, an eight-inch infotainment screen with Sync 3 and FordPass Connect Wi-Fi connectivity for up to 10 devices.

“We obsessed about what Explorer customers need and want,” said Bill Gubing, Explorer chief engineer, in the announcement release. “We met with customer groups, pored through internet forums, and dissected social media posts to determine what they love about today’s Explorer and understand their pain points. Then we found ways to improve it across the board. Every enhancement on this all-new Explorer was inspired by our customers.”

Meanwhile the new Mustang model is being hailed as “the most powerful, street legal Mustang we’ve ever built,” said James Farley, Ford’s president of global markets in Detroit Monday morning, with a 0-to-60 time of in the mid-three second range and a quarter-mile time of less than 11 seconds.

“They gave it a unique, hand-built version of our 5.2-liter aluminum alloy engine in our GT350 and a 3.6-liter supercharger built by Eaton. It delivers more than 700 horsepower. Through a dual-clutch transmission, it changes gears in less than 100 milliseconds,” he said. “That’s as much power as brand new Nascar racecars, but this one is street legal.” 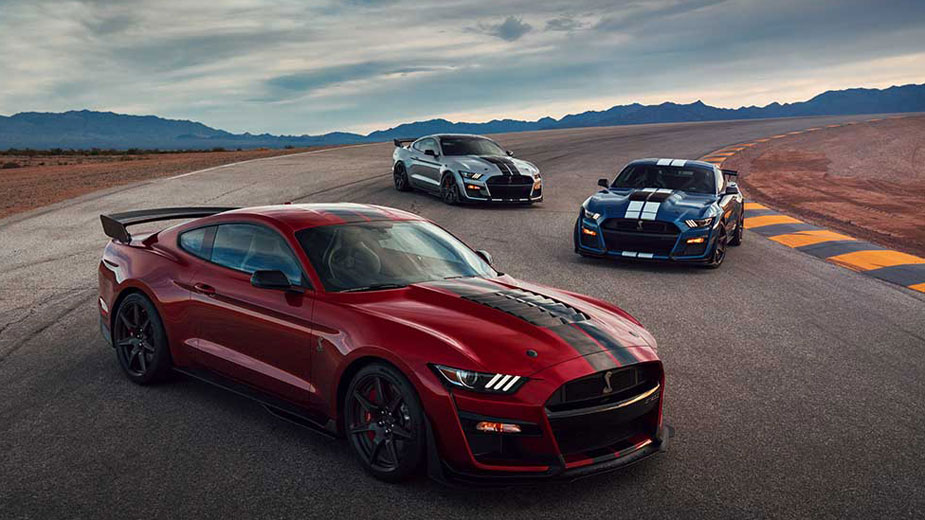 While Ford officially unveiled the redesigned Explorer last week, the Detroit auto show gave the automaker a chance to highlight what it has in store for the coming years.

“By the end of 2020, we will replace 75% of our U.S. lineup. In the next 24 months, we’re going to introduce more trucks, utilities, performance and electrified vehicles than we ever have before,” said Ford’s president and CEO, Jim Hackett.

In addition to the arrival of the Ranger, Explorer and Bronco in showrooms later in 2019, reveals coming later in the year include the Escape, F-Series Super Duty, Transit and a “Mustang-inspired electric vehicle,” the CEO said.

Also key to Ford’s business model, he continued, is the development of technology. Last year, the company purchased the former Michigan Central Station to house a technology campus. Renovation of the building, which had sat empty since 1988, and neighborhood around it is expected to cost Ford $740 million and employ 5,000 by the end of the project. It also partnered with Argo to develop autonomous driving technology.

“These vehicles are laying the foundation for a new way of thinking about mobility and our future. It begins with connectivity. We’re connecting every new Ford vehicle to the cloud and soon these vehicles will talk with the world around them and to each other,” Hackett said. “This means our cars will be able to communicate with stoplights, parking spots, other vehicles and more. The result is going to be an absolute game changer leading us to less traffic congestion, fewer accidents, better parking and a whole lot more.”

Fresh off taking home the North American Truck of the Year award for the Ram 1500, the Fiat Chrysler Automobiles’ truck brand announced its new Ram 3500 Heavy Duty truck. The model is capable of 1,000 foot-pounds of torque and has a towing capacity of 35,100 pounds.

“Where our half-ton success have paved new roads for the Ram brand, our heavy duty success story begins,” said Reid Bigland, Fiat Chrysler Automobiles’ head of the Ram brand. “This is what happens when you take every class-leading attribute from one standout and apply to the legendary backbone of another.” 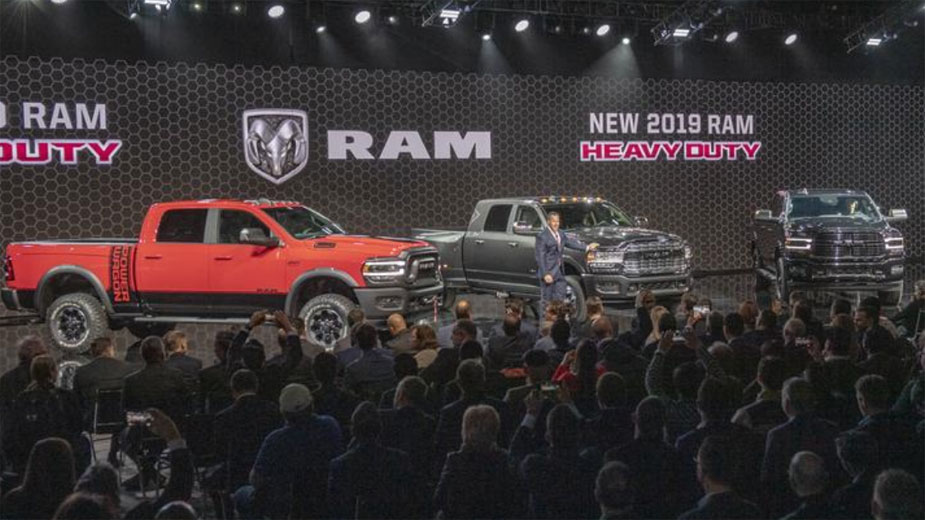 The truck also has 35 new features across all its trim levels, ranging from bed-lowering to tire pressure monitors and reduced interior noise to ports to connect auxiliary cameras that can be watched inside the cabin.

“Our job is to make our customers’ jobs easier. That’s why we’ve added a serious dose of comfort to that capability. This new Ram is the most technologically advanced and luxurious heavy duty ever,” Bigland said.

Beyond the 3500 Heavy Duty, Ram also announced two new trims for its trucks: the Laramine Black edition for the 2500 and the Ram Power Wagon.

The only General Motors brand to have a conference at the North American International Auto Show was Cadillac, which unveiled the XT6 Sunday evening. The SUV will be Cadillac’s largest, featuring three rows of seating and options for adaptive cruise control, parking assist and a night vision mode. Pricing and fuel mileage will be announced when the model hits showrooms in the coming months.

The big announcement for the brand, though, was that GM is going to put Cadillac at the forefront of its movement toward and all-electrical lineup across all its brands. GM CEO Mary Barra teased the Cadillac EV – that most likely won’t be the final product name – but did not reveal any further information. 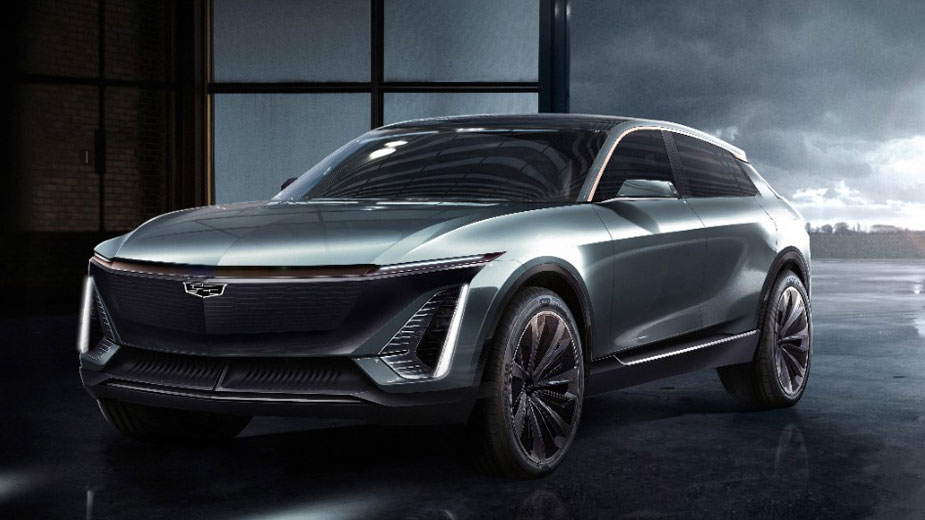 GM CEO Mary Barra said Cadillac will be at the forefront of the company’s move to an all-electric lineup.

“Taking the lead in innovation and technology will make Cadillac, Cadillac again,” she said. “It will represent the height of luxury and innovation while positioning Cadillac as the pinnacle of mobility.”

When it comes to autonomous vehicles, Barra said GM’s Cruise division will launch a fleet of self-driving shuttles later this year “in a dense urban environment.” Earlier this year, Cruise partnered with food delivery service DoorDash to test automated deliveries in San Francisco.

The American automakers’ emphasis on larger SUVs and trucks follows the industry-wide trend. Sunday afternoon, the National Automobile Dealers Association forecast 16.8 million new cars and trucks to be sold in the U.S. this year. Last year, said NADA senior economist Patrick Manzi in the association’s forecast, light trucks accounted for 69% of sales, while cars accounted for 31% of sales. In 2017, the split was 65% trucks and 35% cars, while in 2008, it was 48% trucks and 52% cars.

“One of the main factors for this shift has been continued low oil and gasoline prices and the fact that crossover utility vehicles are nearly as fuel efficient as their sedan counterparts. And we’ve seen fuel economy increases across the board, not just on crossovers but also traditional SUVs and pickups,” he wrote.

COLUMBUS, Ohio – A report prepared by a pro-energy group and released this week by JobsOhio shows Ohio’s manufacturers are in a strong position to recapture a significant share of imported plastics-based products. The study was written by Shale Crescent…

YOUNGSTOWN, Ohio – Volume sales of new cars and trucks to Mahoning Valley customers were slightly lower during November when compared with the same period last year, according to the Greater Cleveland Automobile Dealers’ Association. The organization’s monthly report shows…