WARREN, Ohio – From early morning until 7 p.m., tractor-trailer trucks move in and out of the 28 docks at Trumbull Industries. Workers use forklifts to load the trailers with bathroom and kitchen fixtures, countertops and cabinets, all securely packaged atop large, custom-made wood pallets. Once loaded, each truck travels one of 15 shipping routes across the United States.

The packaging and distribution operation at Trumbull Industries, 300 Dietz Road NE in Warren, is just one aspect of the company that accelerated its growth from a local plumbing wholesale business to a regional, and now national, manufacturer and distributor.

Each week, truck drivers haul some 45 trailers, laden with products made in its fabrication shop, away from the 28 docks, says Sam M. Miller, a third-generation co-owner of the company and vice president of sales and marketing. Trumbull Industries delivers products to areas such as Los Angeles; Portland, Oregon; Denver; Dallas; Atlanta; and Orlando, Fla., sometimes two or three times a week.

“It’s one of our competitive [edges],” he says. “We can ship products across the country without damage.”

Miller operates the company with his brother, Ken Miller, and cousins, Sam H. and Murray Miller. The company employs some 300 full- and part-time workers.

Founded in 1922 by Miller’s grandfather, Sam Miller, the company began as a plumbing wholesaler and retail business, serving local contractors. After World War II, his sons, David and Milton, saw the success and recognized the potential of the wholesale side. They closed the retail division and developed more diverse products.

“We had a pump division. We opened a kitchen cabinet division, a pump valves and fittings division and a waterworks division,” Miller says. “Today, those are the principal diversifications of our business.”

During the 1960s, new construction provided substantial opportunities to grow. But the retrenchment of the steel industry in the 1980s greatly affected the local market, forcing it to diversify yet again.

In 1981, the company created Trumbull Manufacturing to make and sell specialty products for the municipal water and wastewater markets. Among the products: tools, curb and valve box products, and joint restraint products. The company also established a home center division and approached regional home centers such as Stambaugh-Thompson Co. (since closed) and The Hechinger Co., to name two.

Because these companies didn’t buy from wholesalers, Trumbull developed its own product lines. “We created an opportunity of being more of a stocking representative and it enhanced that business,” he says.

This evolved into Transolid, Trumbull Industries’ line of high-quality surfacing products for home and commercial projects. Workers in its fabrication shop on Dietz Road use CNC machinery to cut, shape and polish countertops and cabinets by using materials such as granite, marble and manufactured quartz, which is becoming more popular for its aesthetics and ability to resist stains. 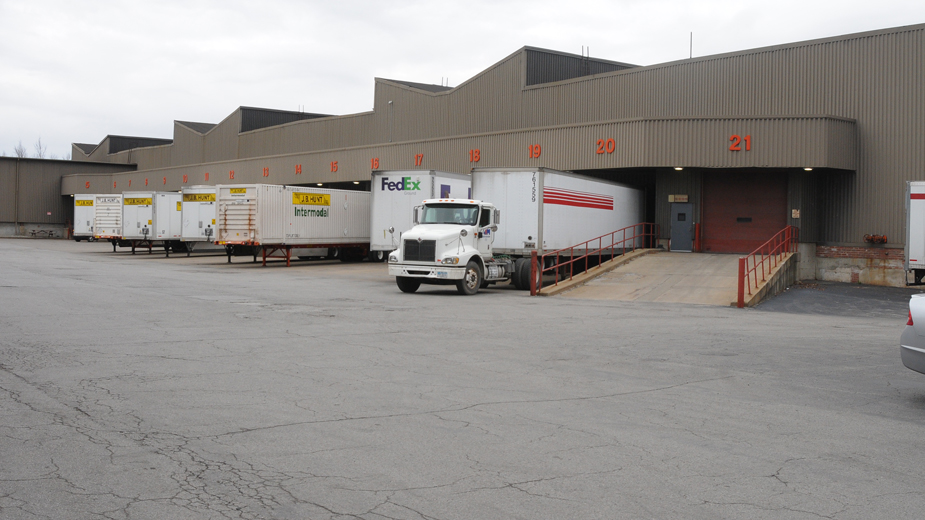 Pictured: Tractor-trailer trucks are loaded at 28 docks and then travel one of 15 shipping routes across the country to distribute products.

Eighty percent of Trumbull’s special products make up 20% of its sales.

“In the industry, it’s called ‘the tail,’ ” Miller says. “We stock lots of varieties of the tail and ship them one at a time.” For items ordered before 6 p.m., “we guarantee same-day shipment.”

This helps Trumbull serve the big-box retailers, such as Home Depot and Lowe’s, which have taken the place of the regional suppliers, he says.

Even so, regional builders, contractors, plumbers and municipalities remain “the heart and soul of our business,” Miller says. Trumbull serves them from sites in Akron, Warren and Youngstown, and in Pennsylvania from Bentleyville, Erie and Meadville.

“They’re looking for and demand expertise, product variety and significant inventory where it’s convenient for them to pick up or pick out,” he says. “We build showrooms in some of our locations so that they can send their customers to make selections, whether it’s for a new house or for remodeling.”

“Just because you have a two-story colonial house doesn’t necessarily mean you can’t modernize it,” he says. “It’s not uncommon for the average homeowner to invest $12,000 to $18,000 in a vertical spa.”

Vertical spas have an overhead rainforest showerhead, body sprayers and a hand-held sprayer. They, along with custom tile showers and free-standing tubs, are popular items in bathroom remodeling projects, Fluent says. Also gaining popularity are electronic shower systems that allow users to preset the water temperature and preferred configuration of their vertical spa systems. Some systems can be programmed on a smartphone.

“Once you have it, you never want to step back from it,” Fluent says.

For kitchens, open spaces and open floor plans are the most desired components and “islands are a must,” he says. “I get a lot of clients that are totally voiding the dinette or dining room,” he says. Single-tier seating is also popular. So are apron and farmhouse sinks and electronic, hands-free faucets that can be turned on and off with the wave of a hand.

Fluent spends about 70% of his time working directly with end users, he says. Most projects require two to three appointments where they review measurements, define the available space and select fixtures and surfaces. 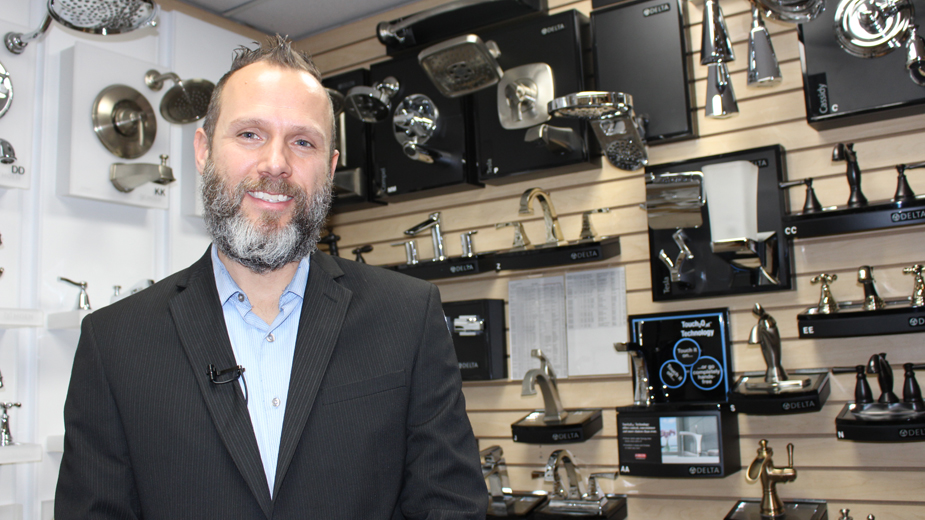 Pictured: John Fluent spends most of his time working with end users of the company’s products.

Once the end user makes his selections, Trumbull sets the budget around his wish list. Designers use 3-D virtual imaging software to build a layout and take customers on a virtual walkthrough of their future bathroom or kitchen.

The 3-D software incorporates color, textures, flooring, fixtures, lighting elements, furniture and cabinets that allow Trumbull Industries to build layouts accurate to one-sixteenth of an inch. Costs are automatically generated and adjusted as elements are added to or removed from the design.

Showrooms sell Trumbull’s private label products as well as other name brands, such as Moen and Delta. Trumbull Industries also carries a few specialty lines, such as Catalano USA, the U.S. division of the Italian-based Catalano, which manufactures high-end bathroom fixtures.

Online sales drive new business and help Trumbull better serve national customers and compete with companies in other states, Miller says. This year, the company remodeled an onsite building for its e-commerce division, which is growing 20% annually and employs 20.

The division builds branded websites for its customers to help them sell products and serve their customers, he says. Websites feature more than 350,000 products, for which customers can access information in real time, including resale price, costs, shipping, delivery time and availability.

“We built this system around our customer’s viewpoint, not ours,” Miller says. “If we can make our customers successful, we can be successful.”

“These are the three positions that allow the consumer to get a really good view of the product,” Walker says. “It allows them to spin the product online and see every angle of it before they make a purchase.”

Modern Home Kitchen and Bath in Warren implemented their website this year and it’s made the design process more efficient and cost-effective, says designer Erin Danchise.

“In the design world, things have changed,” Danchise says. “We are now constantly up against the clock. Everybody wants information now and our customers expect prompt service with regard to quotes being done.”

Rather than flip through several manufacturer catalogs and contact the vendors and suppliers for prices, the website collects that information in one place, she says. What once took days now takes hours.

“Because it’s on the internet, you can do it from any location and you’re not lugging around heavy price books,” she says. Quotes are quickly put together and include the 360-degree images, which are important for the customers. “This is a visual job, and sometimes model numbers just don’t cut it,” she says.

Looking ahead, with one tradesman entering the industry as five retire, Miller says, products have to be easier to install to reduce labor. Trumbull is using more crimped fittings in lieu of soldering, which allows tradesmen to make the fitting quickly, even while standing on a ladder.

The company is also developing products that meet stricter requirements for efficiency in water and fuel use. For example, the industry standard for toilets is moving toward one gallon per flush, less than the 1.6-gallon maximum regulations impose.

“Plumbing contractors are faced with delivering high-quality products in spite of government regulations that are requiring less water or less fuel use,” he says. “What we’re trying to do is develop the best products that can deliver function [and] quality.”

Pictured at top: Sam M. Miller is the third generation of his family to co-own and operate the Trumbull Industries, which today employs 300.

By Tom GacseCEO, YMCA of Youngstown YOUNGSTOWN, Ohio – In 2022, the YMCA of Youngstown celebrated 138 years of service and impact to our communities. As an organization, we built bridges, served all, acted as servant leaders and functioned in…