Green sent a letter Friday to Trump, alerting the president about the hardships visited upon American workers and their families and especially about the plight of General Motors Co.’s Lordstown assembly plant.

This is Green’s second attempt to reach out to Trump. An earlier letter to Trump was not answered.

“I am reaching out to you again in regards to the many working families, businesses, and communities in northeast Ohio,” Green’s second letter states. “My previous letter dated July 6, 2018, has yet to receive a response.”

In November, GM announced it had “unallocated” a new product to the Lordstown complex and stated it would cease production of the vehicle built there – the Chevrolet Cruze – on March 8. Once the plant shuts down, about 1,500 employees will lose their jobs. Three other GM plants will close next month with the total job loss estimated at 14,000. And on Monday the automaker will begin to layoff about 4,000 salaried workers as it reduces the white-collar workforce by 15%.

The United Auto Workers released a video Thursday that reminded GM and American taxpayers about how the automaker was rescued 10 years ago by the federal government. Autoworkers are seen holding signs that read, “GM: We invested in  you. Now it’s your turn to invest in US!” 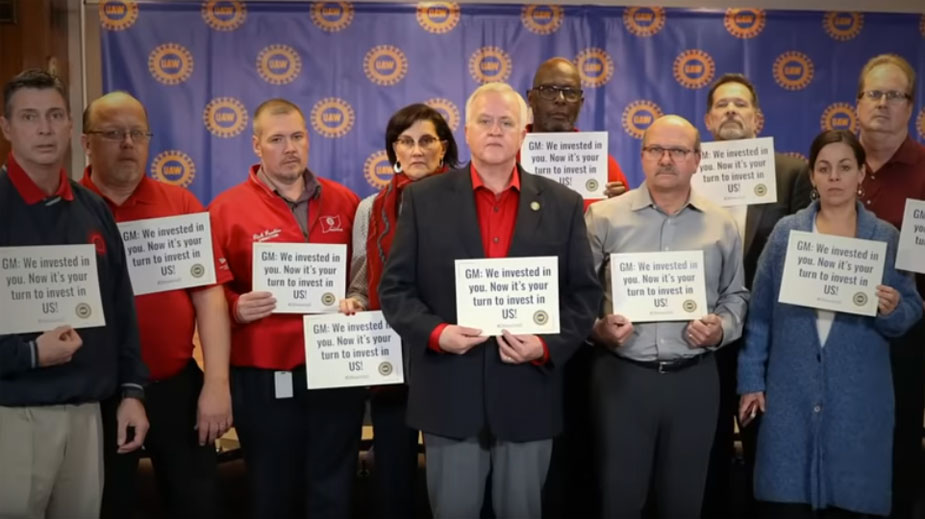 The video comes shortly after the UAW filed a lawsuit against GM for breach of the labor contract and just weeks after more than 4,000 letters were delivered to GM headquarters calling on the company to do the right thing for American workers, not Wall Street.

Closing the Lordstown plant “will have an impact on over 40,000 jobs in the state of Ohio,” Green tells Trump in his letter. “While this might not seem important to you, it will have a devastating impact on many families, businesses, and communities, especially here in the Mahoning Valley,” the letter states.

Green will be U.S. Rep. Tim Ryan’s guest Tuesday when Trump delivers his speech in the House chamber.

“Your campaign promise to retain and create good manufacturing jobs in this community awarded you with many votes,” his letter continues. “We should be making it more profitable for corporations to produce in the USA, not the other way around.”

Green says he looks forward to hearing the president’s speech Tuesday and hopes that he addresses the important issues affecting American workers and American families. “I am hopeful that corporations will be held accountable for their actions, and that workers and their communities receive the same respect as profits,” he writes.

“Good jobs matter. We don’t want to see anymore of these jobs leave – especially in areas such as the Mahoning Valley.”

EAST LIVERPOOL, Ohio – A lawsuit seeking more than $2 million has been filed in Columbiana County Common Pleas Court against FRX Real Estate Holding Co. of Ohio LLC by the general contractor who worked on its new medical marijuana…

Inspiring Minds Regroups And Rebuilds in 2022

WARREN, Ohio – After the pandemic and three devastating floods at its Warren headquarters, Inspiring Minds focused on regrowth in 2022. “The pandemic challenged our access to students, resources and opportunities. But losing everything in the floods challenged our ability…

YOUNGSTOWN, Ohio – A decision is expected in the coming weeks on whether Trivium Packaging USA Corp. will move forward on two new lines at its Youngstown plant. The global metal-packaging manufacturer is “still in the process of finalizing the…