YOUNGSTOWN, Ohio — Forty hours a week, David Richardson operates a vacuum truck at Vallourec Star in Youngstown. In January, he put himself to work 30 more hours a week by driving people to where they need to be.

Richardson’s second job is as a driver for Uber and Lyft, the ride-sharing apps that allow a customer to hire a driver usually within minutes.

“I wake up, grab a cup of coffee, turn on the app and start driving,” he says. “I like it a lot. You meet a lot of different people from different walks of life.”

In the morning, most of his passengers are on their way to work while at night most are going to bars in downtown Youngstown, he says.

“The age bracket is crazy because it’s from teens to the elderly,” he says of his customers. “It’s pretty cool. I’m a people person so it’s entertaining.”

Between driving and working at Vallourec, Richardson works as many as 80 hours each week. On an average week, he can earn from $300 to $600 driving for Lyft and Uber. The income can skyrocket during busier weeks. Around St. Patrick’s Day, he says he made more than $1,200.

Richardson is 32 and is like most of the drivers who work for Lyft using it as a second income. In the company’s 2018 Economic Impact Report, Lyft reported 92% of its drivers are employed full-time elsewhere or seeking employment, are full-time students or retired. Nearly a quarter of the drivers, 23%, are over 50, 18% own their own business and half use their earnings from Lyft to help cover primary expenses such as food, housing and health care.

Garrett Kimmel, a 28-year-old Youngstown resident, also drives for Uber and Lyft as a second source of income.

“Driving is something I don’t mind doing and it seemed like an easy way to pick up extra cash,” Kimmel says. “You can set your own hours and control when you do or don’t do it.”

During the week, Kimmel is a social worker, but on Friday and Saturday nights he drives for the ride-sharing companies. “I enjoy being able to interact with different people and it’s self-rewarding in the fact that you’re making sure somebody is not driving drunk,” he says.

Lyft reports it employs 1.4 million drivers in the United States and Toronto, Canada, who will carry 23 million passengers this year. Its customers are spending 45% more money at local businesses, 66% more at bars and restaurants, 42% more at entertainment venues and 72% go out more or stay out longer, according to the company’s economic impact report.

The majority of Kimmel’s riders are in their 20s and 30s, he says, but he has picked up seniors and high-school students as well.

Most are picked up in Austintown, Boardman, Canfield or Poland and are destined for either downtown Youngstown or Hollywood Gaming at Mahoning Valley Race Course.

Lyft driver Earlina Gilford says most of her passengers are businesspeople she picks up at the Youngstown-Warren Regional Airport or at their homes for rides to law offices, hospitals and nursing homes.

“I only drive in the daytime,” Gilford says. “I drive a lot of business people and people going to work.” 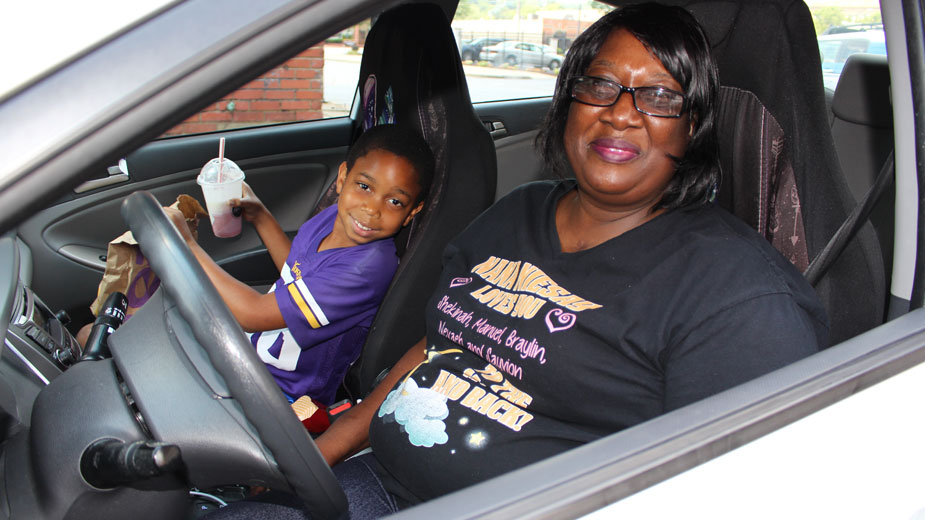 Earlina Gilford and her son, Brandon, take a break from driving. She delivers most of her passengers to their work sites.

Gilford started driving for Lyft in July and drives Monday through Saturday, typically starting her day at 6 a.m. and ending at 5 p.m. It’s her main source of income and she says she would recommend driving for the company “if you’re a people-person. I love talking to people and meeting people.”

Drivers are paid for each ride based on the fare, a combination of a base pay, time spent driving and mileage. Drivers keep 75% of the fare of each ride and their tips.

The adoption of the Uber and Lyft apps in Mahoning Valley has lagged behind bigger metropolitan areas. Lyft was launched in 2012 as Zimride and changed its name the following year. By April 2014, it was operating in 60 cities in the United States, but wasn’t available in Youngstown until February 2017, says Zachary Kizer, communications specialist for Lyft.

Since its adoption here, Kizer says, “We are thrilled by the response from passengers and drivers and are excited to offer a reliable source of income and convenient transportation to the Youngstown area.”

Josh Toot, vice president of commercial banking at Home Savings Bank, can attest that the apps have made going from point A to point B more convenient for him.“I use it constantly,” he says. “It’s more efficient and it’s more responsible.”

Toot, a resident of Canfield, says he mostly uses Uber and Lyft for personal trips in the Valley.

“It’s more for entertainment,” he says. “You’re coming downtown and you don’t want to worry about parking or driving if you’re going to have a couple drinks.”

Similarly, Corey Patrick, director of marketing and communications at the Youngstown Business Incubator, uses the apps for recreational outings.

“I notice myself going out and enjoying more evenings and activities with my friends because I don’t have to worry about where I park, getting my car towed, leaving my car somewhere unknown or dealing with traffic,” he says. “Most of the time, Uber or Lyft is much cheaper than parking so the convenience is great.”

Uber and Lyft both offer the option of ordering a car that seats four or, through the UberXL and LyftXL service, a vehicle that seats six or more.

If Toot is going somewhere to meet more than just a few friends, he will order one of the XL rides and have the driver pick up his friends on the way.

A ride from downtown Youngstown to the Southern Park Mall in Boardman is roughly a six-mile trip and, for a regular-sized vehicle, costs around $10 to $15, although the price fluctuates depending on the time of day and the number of drivers and riders using the service.

Surcharges are common on weekend nights that are busy, or if there is an event, say, at the Covelli Centre and many people are calling for an Uber or Lyft.

When using the apps in other cities while traveling, Toot says the drivers are a good resource for tourist information. “They’ll tell you about the places people don’t know about, so it’s nice,” he says.

At HD Davis CPAs in Liberty Township, managing partner Tim Petrey says his firm has a corporate account for employees to use when it hosts events.

“When we have an event where any of our folks might be drinking, we provide them with a corporate Uber account to make sure they get home safe,” he says. “It isn’t expensive and I want our folks to have fun and be safe.”

On some days, Petrey says he will have an Uber driver take him to his office in the morning so he can get some work done on the road. “I can get some things accomplished on the way in and it is surprisingly productive,” he says.

Petrey has found the app easy to use and says he will frequently open it just to see the wait time. Over the past year, Petrey says he’s noticed the number of drivers rise as more people have started to use the service.

“I love the fact that it is here and available.”

Pictured above: David Richardson is picking up a passenger who is staying at the DoubleTree by Hilton in downtown Youngstown.