YOUNGSTOWN, Ohio – As the median age of the Mahoning Valley increases, builders and remodelers are completing projects that make it easier for customers to grow old in their own homes.

There are a few basic changes that can be made to a home to make aging in place easier. Grab bars can be put in showers and near toilets and ramps to get in and out of the house are an option.

“The easiest thing they’re looking for is a barrier-free bathroom,” says Joseph Chevraux, president of JTEK Solutions Group, Louisville, Ohio. “That can be showers with a low threshold, grab bars around toilets and in showers, a toilet with a height that’s easy to get on and off and help around the sink area.”

Chevraux, who founded JTEK in 2011, is a certified environmental access consultant, the training for which includes learning how to adapt homes to better accommodate those with mobility issues.

“We’ll come in and tell them they can widen this door or do this and that. … It’s very similar to what [physical and occupational therapists] do. I can assess homes. I just can’t prescribe like a doctor can,” he says. “One of our big concerns is people falling. [At JTEK] we like to have the doors swing out into the hallway. That way fire and EMS aren’t pushing into you to get in the door. Seconds count and it’s something simple.”

Chevraux stocks some 7,000 products that range from stair lifts to aluminum ramps to automated door openers.

Sam Pitzulo has held the certification since 2000 and does a couple of CAPS-compliant homes each year, either as new builds or remodeling projects.

“You want to eliminate the first barrier: how to get into your home,” he says. “It makes it very accessible for the family. They don’t outgrow or out-age their home.”

Jason Duncan of Duncan Bath & Kitchen earned the certification last autumn after a three-day course in Canton. Afterward, he came back to Poland and ran a brief seminar for Duncan employees, he says, to relay what he had learned.

“Eighty-seven percent of people over 65 want to age in their house or their community [according to the AARP]. They talked about different floor plans, rollout trays for base cabinets, the placement of grab bars, widening doorways,” he says. “The biggest thing is taking out the tub and putting in a shower or doing a wet bath with a shower, vanity and wall-hung toilet with a drain in the middle [of the room]. Everything can get wet and it’s open.”

Other common upgrades include vanities in bathrooms with room to roll a wheelchair underneath and angled mirrors – so the user doesn’t have to get out of her chair to use it – as well as Safeway Steps, where iron or fiberglass tubs have a piece cut from the side to make it easier to get in and out. 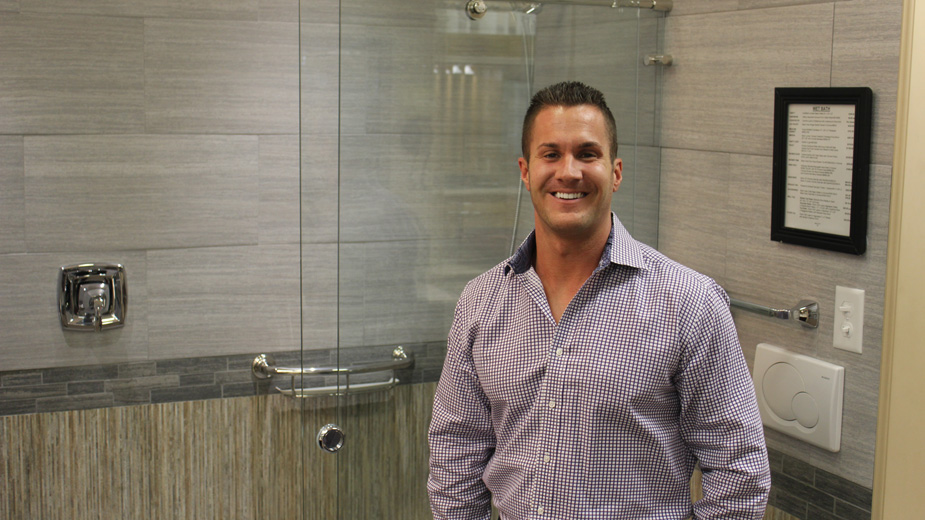 “It can be done in a day. That’s big with people who need it done today because they’re waiting to come home,” Duncan says. “We’re getting a lot more now because of the cost of going into a nursing home. That can be $97,000 a year. I probably get four calls a week for grab bars. We do a lot of walk-in tubs.”

The cost of nursing homes has created a growing market for builders and remodelers. A report from Eastgate Regional Council of Governments detailed that death was the second-largest cause of population decline in the Youngstown-Warren metropolitan statistical area as the net loss 2010 to 2015 was 6,705.

A 2015 report for the Joint Center for Housing Studies at Harvard University noted that 44% of households with someone over the age of 65 need accessibility improvements and that 45% of “older homeowners” plan to do improvement projects. In total, the report noted nearly half of home improvement spending comes from aging homeowners.

“We make the houses easier to live in,” says Ken Zuzik, developer of Abbey Road Villas in Canfield Township.

All 23 houses in the development are designed around aging in place, he says, and most are custom designed for its occupants.

In the Abbey Road houses, the bathroom doorways are wider, the steps leading up to front doors are replaced with platforms and garages are bigger to accommodate a ramp and two cars.

“We do multigenerational plan, which just means we separate out the bedrooms. In a normal plan, the bedrooms are grouped together. If you’re a young mother, you want your baby in the next room. In this market, they don’t need that,” he says. “They split the bedrooms, so we do the second bedroom a little bit larger and closer to the hall bathroom.”

Another option for families is in-law suites, additions onto houses that serve as homes unto themselves for seniors that move in with family.

The additions, generally 600 square feet, are usually completed in about eight months, from first meeting to being move-in ready, and run roughly the same price as a nursing home, between $80,000 and $90,000.

“There’s always a bedroom with a closet. In the bathroom, everything’s handicapped with 36-inch-wide doors,” Alexander says. “They have a small kitchen with a range that has shutoffs beneath the range so they can’t accidentally turn them on. It also includes a little sitting room.”

Aside from these projects, Alexander says he’s seen a shift in the type of remodeling work people ask for. People ask for laundry rooms on the first floor instead of the basement or, in some cases, near a second-floor master bedroom.

“All it takes is a six-foot closet with some folding doors on it,” he says. “The big thing is having [as much as possible] on one floor so they’re not using stairs all the time.”

Since he began working on in-law suites, Alexander says he’s gotten more and more calls every year for aging in place projects.

More recently, he continues, he’s seen inquiries coming from those in their 50s trying to prepare and avoid having to move out of their houses.

“Ten thousand people turn 65 every day in the United States. That’s a lot of seniors,” says JTEK’s Chevraux. “People are going to be staying at home. Yes, at some point you may have to go to a nursing home or assisted living. But for the most part, people want to stay in their home and neighborhood.”

by The Warren Flea & Farmers Market - 12 hours ago