YOUNGSTOWN, Ohio – From custom rings to Hollywood hairdos, the internet is a prime source of inspiration for how engaged couples envision their weddings. Websites such as The Knot, Pinterest and Instagram give couples an abundance of ideas, and vendors must adapt to fulfill their dreams.

“A bridal piece can be a lifelong piece,” he says. “To make it unique makes it even more special than it already is.”

For engagement rings, thin delicate ring bands and solitude settings – rings with one diamond – are preferred over the wider rings with diamonds installed on the sides so popular five to 10 years ago, Aebischer says. Solitude ring sales have increased 20% over the last few years and are popular among customers who want to pay less.

“With our fine-cut diamonds, the solitude setting doesn’t take away from them,” he says. “Even when you scale down, you’ll still be satisfied.”

Once a couple becomes engaged, booking the venue and purchasing the bridal gown are the next steps, says Lori Dubasik, owner of Evaline’s Bridal in Warren. With most people becoming formally engaged over the holidays, she expects large audiences for the bridal show that Evaline’s hosts Jan. 7, at the Covelli Centre.

Popular styles include fit and flare, ball gowns and A-line dresses. Dubasik also expects the royal wedding of Meghan Markle and British Prince Harry in May to inspire new trends just as Kate Middleton’s dress did in 2011. “Of course, every bride wants to see what [Markle] will choose and who the designer will be,” she says. 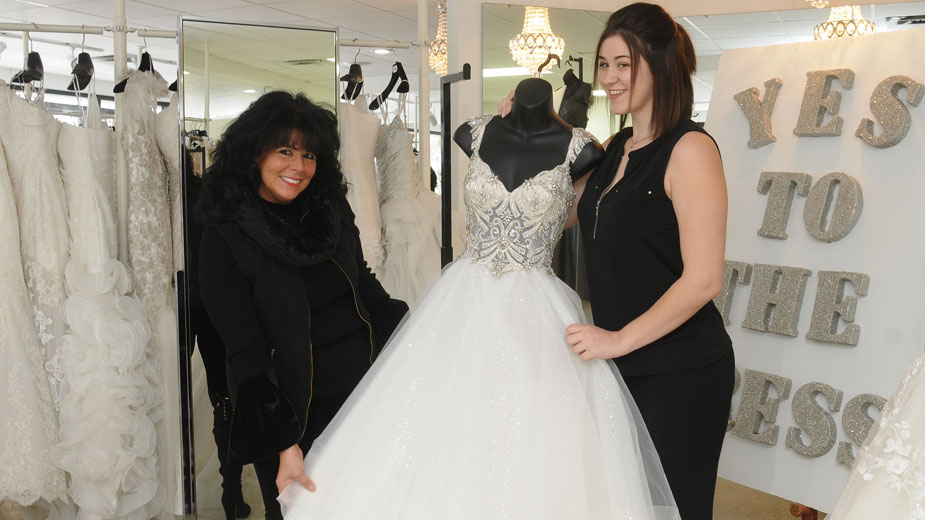 When selecting a dress, brides should consider body style, location and the theme of the day, she says, “A ball gown might not work on the beach. Maybe instead she’ll choose a chiffon dress.” Evaline’s customers have been married in banquet halls, barns, airport hangars and their own backyards, she says.

For brides who want to be a princess on their wedding day, Buhl Mansion Guesthouse & Spa in Sharon, Pa., offers a ‘Castle for a Day’ package, where the bridal party and guests have sole use of the mansion and property, says its general manager, Laura Ackley. The package can range from $8,000 to $10,000, minus the cost of catering, which Buhl doesn’t offer. Exclusivity lets the bridal party enjoy the experience even more, she says.

Weddings with about 50 people were popular last year, but Ackley says she has been booking larger weddings this year. Buhl and its sister property, Tara – A Country Inn, can accommodate ceremonies and receptions, although Tara holds more receptions because of its restaurants, which are open to the public, she says.

“Name a story and over the past 15 years at Buhl Mansion and 31 years of Tara, we’ve seen them,” she says.

Some private country clubs are also open for public weddings. The Lake Club is booked solid through this year and already booking into 2019, says its vice president, Chris Sammartino.

Prime season is from May to October so ceremonies can be held outside with Lake Evans as a backdrop, “so that people don’t have to put a lot of money into all the flowers and window treatments and lighting, and all that stuff that you might have to do at another banquet facility.”

Customers usually use the savings toward “a creative menu,” he says. More customers are forgoing the traditional “Youngstown buffet” of chicken, beef and pasta dishes for options such as food stations with carved sirloin or filet tenderloin, charcuterie tables and displays of seafood.

“People want to be different from the person before,” he says. “They want to be the leader and be talked about.”

Lisa DelGarbino, event coordinator at Leo’s Ristorante in Warren, says after-parties are a big trend now. Instead of ending the festivities at 11 p.m. after the reception, many choose to connect a tent to the building “and transform it almost into a night club.

Leo’s hosts ceremonies and receptions at its banquet center as well as Stambaugh Auditorium in Youngstown. And while DelGarbino recognizes the need for off-site events, she says the expense is bringing more people back inside.

“The cost difference could be from $2,000 and up, depending on what is needed,” she says. “Some locations don’t have equipment and you have to rent everything, including propane ovens. We have built kitchens in fields under a tent.”

Specialty lighting has evolved beyond monograms and patterns to creating environments with heavier color tones that focus on the centerpieces and the dance floor, says Tony Ferrello, president and CEO of Forty Two Event Production in Boardman.

“We’re washing them with color and depth,” he says. “You’re seeing a lot of blues and reds, especially on the walls.”

Forty Two works with designers and planners to light weddings at banquet halls throughout the Mahoning Valley. Lighting packages range from $1,500 to up to $40,000.

Working with natural light for engagement photos and the wedding day helps Menning Photographic of Youngstown capture the newlyweds’ emotions and sense of union, says Josh Menning, who owns the company with his wife, Danielle. He also employs off-camera flash techniques to “create a dynamic shot,” he says.

“You take dreamy images that really focuses on the emotion that’s going on, and the rest of the backdrop kind of blurs away,” he says.

More couples get ideas from the company’s engagement style guide than the internet, Menning says.

“They trust us to capture who they are through the engagement session and the wedding day,” he says. “We step back and let them interact naturally.”

Jen Melia, owner of The Makeup Boutique by Jen Melia in Boardman, has done makeup sessions for brides and as many as 19 others on wedding day, she says. Anything from Pinterest to Kim Kardashian’s makeup tips on Instagram have inspired trends over the last few years, including highlighted skin, defined cheekbones, full lashes and defined eyebrows, she says. Classic looks with neutral and midtone colors are also popular.

“It’s not so much about being so colorful trendy as it is being classically defined with natural beauty,” she says.

Hairdressers saw similar trends in 2017 with many brides preferring loose, bohemian styles, which Bianca Heasely calls a “messy, undone done” look, complemented with natural skin tones for makeup. Heasely, who owns Roots Salon and Wellness Spa in Boardman, says many brides want to look as they do everyday, although some still prefer a classic, Hollywood up-do. She’s also seen a decrease in veils, doing just 12 of about 40 weddings in 2017.

“Celebrities aren’t wearing veils,” she says. “Over the past five years, brides aren’t covering their faces and are using the veils as more of a headpiece.”

While the internet is good for inspiration, Heasely sometimes has to tell her customers what can and can’t be done. Before the bride selects a style, Heasely requires her to spend a trial day at her salon to try a number of styles that compliment the bride.

“People on the internet are beautiful, but I need to be the one who brings them [brides] back to reality,” she says. “If I don’t think the style will compliment them, I am very honest with them.”

Cakes can require a dose of reality too, says Stella Kotsatos-Angelo, who operates The Cake Boutique in Howland. Pictures provide a good starting point, but “I can recognize things that are created just for a picture,” she says. “I point out the things that aren’t conducive to their environment.”

While chocolate drizzle is popular, it doesn’t work for outdoor weddings because it melts and “you’ll have bees everywhere.” If a bride must have it, Kotsatos-Angelo recommends keeping it refrigerated until it’s cut.

With the increasing popularity of barn weddings, rustic cakes account for almost half of The Cake Boutique’s business including so-called naked cakes, which have no icing. Adding fresh fruit is also popular. Prices vary, but to feed 200 people, customers can expect to spend between $800 and $1,000, she says.

As for the sculpted cakes that got her business featured on Food Network’s “Cake Wars,” Kotsatos-Angelo makes fewer than 10 annually for weddings. “Everyone wants that cake, but once they figure out how much it costs, they don’t.”