SHARON, Pa. — To some, the process of “throwing clay” might seem perfectly straightforward: Put the clay on the pottery wheel, shape it, fire and glaze it. But for Christian Walker, the process parallels many aspects of life.

Walker was a sophomore at Farrell High School when he heard Bill Strickland speak during a school assembly. It was then that Walker first learned of the Hope Center for Arts and Technology, or HopeCAT, in Sharon.

During the assembly, Strickland spoke about the vision that he promotes through his own organization, Manchester Bidwell in Pittsburgh, which combines adult career training, youth arts education, jazz presentation, and orchid and floral sales in an effort to positively change the lives of underserved populations. HopeCAT based its own curriculum on that vision and pairs adult medical assistant training with youth art education in ceramics.

“I wasn’t necessarily interested in clay at the time,” Walker says. “But I bought into the bigger picture of what [Strickland] was trying to accomplish. And ever since then, I’ve learned so much and it’s been a great experience.”

Walker, who was always interested in the visual arts, enrolled in HopeCAT’s ceramics program. Learning how to throw clay helped him put things about life into perspective, he says, and he drew many parallels between the process and life in general.

Now 20, Walker compares the process of working in ceramics to his time as a student at Allegheny College in Meadville, where he double majors in computer science and business economics.

“Before going to college, I honestly wanted to be a lawyer,” he says. “I ended up switching and got into computer science. That can be related to me just picking the clay that I wanted to choose, and glazing. It can be the process that takes over the next four years that I have at college.

“The whole process of throwing clay is just relatable,” he continues. “It shows that clay is more than just clay. It’s something that’s bigger than life and that’s what this program taught me.”

That message is at the heart of HopeCAT’s ceramics program, says Christian Kuharik, director of ceramics. Like life, ceramics requires patience and respect, he says.

“Ceramics is a very humbling kind of thing,” Kuharik says. “It takes a lot of practice. You’re going to fail and you have to fail at it in order to succeed. So it correlates with the kids and their life lessons.” 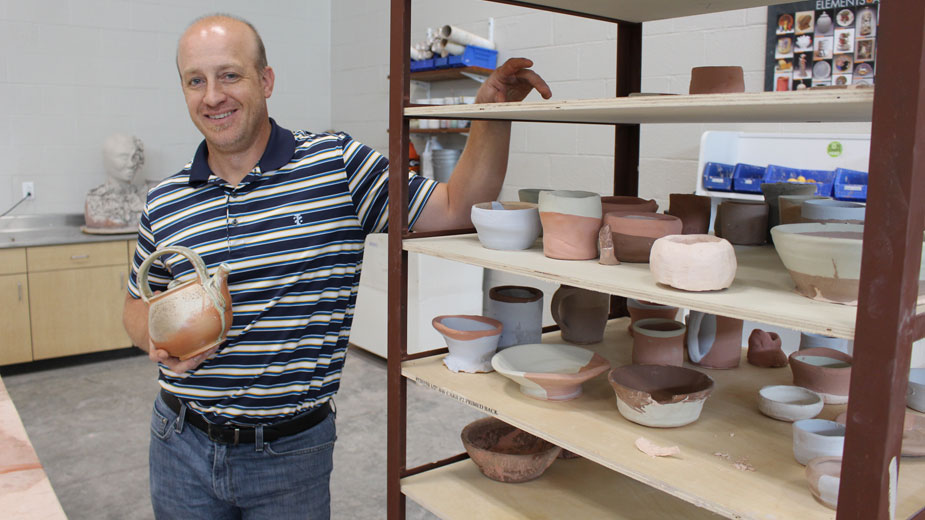 Lessons that Walker is applying as part of the [email protected]’s inaugural summer incubator startup program. In November 2017, he founded Animatr Apparel, a streetwear brand that features his own designs in the style of Japanese animation, or anime. Shirts are for sale at AnimatrApparel.com.

Each design includes messages and symbols that promote acceptance and cultural awareness. The goal, he says, is to counter a general misconception about people who watch anime as being societal outcasts.

“My brand kind of changes that narrative or tries to change it in some type of way through beautiful designs and art,” he says. “My brand has a purpose that’s bigger than just streetwear or anime.”

Through the eCenter, Walker has enjoyed access to business professionals and other entrepreneurs that mentor him as he builds his business. The eCenter’s co-working space gives him an opportunity to network with the nine other student entrepreneurs to get their perspective as well.

Up until joining the eCenter’s summer program, Walker had only sold a few T-shirts. Since beginning the program earlier this summer, he’s released a new collection and sales have increased “three times from what I started at,” he says.

One of the new T-shirts, called “Humble,” includes the symbols for “modest” and “emptiness,” he says, “and together they enforce emptiness of ego,” he says.

It’s an important message coming from a student whose academic achievements include chief editor of his high school newspaper, “The Farrell Pride,” National Honor Society president and receiving a scholarship from the Corella & Bertram F. Bonner Foundation.

And while Walker hopes to eventually own his own technology company or be a part of a major startup, he says he isn’t sure what he’ll do with the Animatr brand down the road.

“I want to grow it as much as possible,” Walker says. “And if it does well, you know, God’s good. But if doesn’t, it’s not the end of the world. I just take it as experience.”

Click here to read our full story about HopeCAT in Impact Makers.

YSU Faculty Working With Administration to Save Programs

YOUNGSTOWN, Ohio – In response to ongoing discussions about possible program adjustments and eliminations, YSU-OEA, the faculty union representing Youngstown State University’s full time faculty, is reaffirming its commitment to working with YSU’s administration to save the university’s diverse programs.…

YOUNGSTOWN, Ohio – To Becky Keck, the importance of the arts to society is demonstrated on a daily basis by a familiar ritual. When people get into their car or truck to go somewhere, what is the first thing they…