“I’m the worst businessman you ever met,” says the 53-year-old Barna.

Barna is the inventor of the Bolo Stick, a door barricade he designed to keep a shooter from entering the room.

The Bolo Stick consists of three pieces of cold-rolled steel. The bracket is affixed to the base of the door while the safety anchor is drilled into the floor directly below.

To lock the door, a person need only drop the steel pin into the bracket that then feeds into the anchor, preventing the door from opening.

“It’ll self-feed itself,” he says as he drops the pin. “Under stress you can do that.”

Statistically, the overwhelming majority of Barna’s customers will never need to use Bolo Stick. In fact, he says he isn’t aware of even one instance where one was used to deny entry to an active shooter since he began selling them in 2014.

“This stuff is getting worse. You need to be proactive,” Barna says. “It doesn’t seem to resonate with people until it hits close to home.”

Which could be why the current gun debate, in the wake of the 17 deaths at Marjory Stoneman Douglas High School in Florida, has outlasted the typically short news cycle, he says.

“People are starting to react and say, ‘This can’t happen,’ ” he says.

As a result, Barna’s company, Bolo Stick LLC, is on pace to have its best year.

“This year we’re on pace to blow it out of the water,” Barna says, with a mixture of pride and surprise.

He says most of the growth is coming from a mixture of businesses and institutions from outside the area.

“Churches are a huge market,” he says, as are manufacturing plants.

Bolo Stick is in a dozen states throughout the country.

“We’re having faster growth outside the state than we are in the state,” Barna says.

Still, selling his invention in the Mahoning Valley is how Bolo Stick got its start.

He managed to sell the Bolo Stick to four school districts in the Valley, only to discover the product didn’t comply with state fire codes, which state a door couldn’t require more than one action (turning the knob) to open. 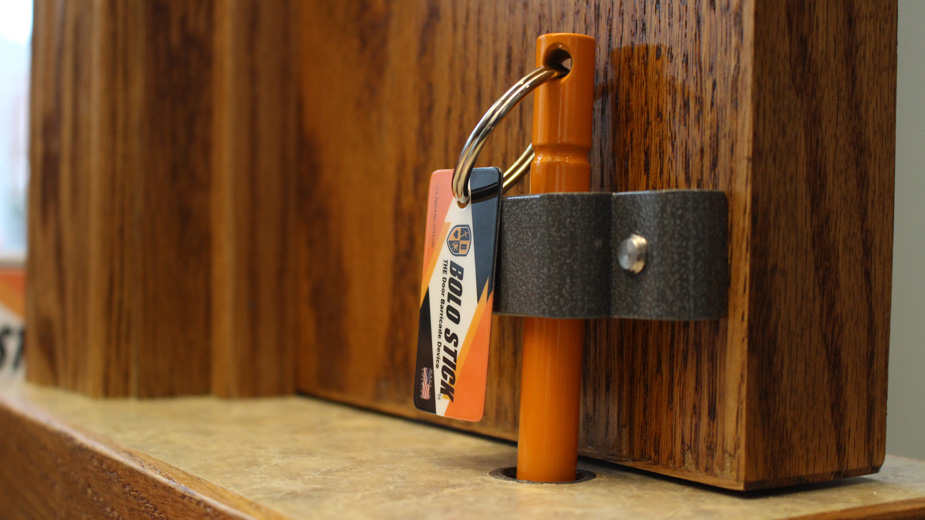 The two drew up legislation and Barna testified before the Ohio House of Representatives.

In 2015, the Board of Building Standards rejected the proposed changes until Barna says Gov. John Kasich “ordered them, ‘You will come up with rules for how this will be used,’ and in 2016 he signed it into law.”

So once again Barna focused on selling the Bolo Stick. And once again he hit a snag.

So this year he lowered the cost from $99, with discounts for large quantities, to a flat rate of $59.

“Now the schools that needed only 50 or 80 could take advantage of a lower price and they could afford to safeguard their schools,” he says.

Locally, Barna’s product is in most schools in Trumbull County and one, Youngstown Community School, in Mahoning County.

“Although there’s no Coke or Pepsi yet in this market,” he says of potential competitors, “I would put out there that our company and another company, called Nightlock, are the two choices people are going to,” he says. “And that’s saying something. This is a one-man band.”

Since the beginning, Barna has leveraged local resources to keep his one-man band playing.

His first stop, after getting the idea for the Bolo Stick, was the Small Business Development Center at Youngstown State University. He continues to meet regularly with its staff.

The Bolo Stick is manufactured at Warren Precision Fab in Warren, and the powder coating is applied at Witchdoctor’s Motorcycle Accessories also in Warren.

Students at the Trumbull Career & Technical Center produce all of Barna’s promotional videos.

“By circulating the videos, our search engine optimization got better,” he says, “and then we started rising to the top.

“Even the key rings, I buy those from Andrews Hardware in Howland,” he proudly declares.

Using the success of his product to help his community is always front-and-center in Barna’s mind.

“It’s not monetary. This is a passion,” he states. “If it saves one kid’s life, then my goal is reached.”

Barna, a police officer in the Howland Police Department 31 years, got the idea for his invention while performing active shooter demonstrations in the area.

The program most businesses and institutions use for active shooter training is Alice, an acronym for alert, lockdown, inform, counter and evacuate.

“If you can escape, escape. If not, they want you to close the doors, lock it down, and put desks and chairs in front of it,” Barna says.

But he detected a flaw.

“Most of your school doors have a window pane in them. If I want in that room, I break the window out, unlock the door, and I’m in,” he explains.

Further, he notes, many schools have doors that open out, “so building a wall of desks and chairs makes no sense at all.”

“It prevents anybody outside from opening the door because all our doors open out,” he said.

The simplicity was another selling point.

“I’ve seen these things where you have to slide it under the door, then slide it right and left,” Kenneally says. “This is just drop the pin and go.”

At Lordstown Elementary, Principal Rich Zigarovich, says all doors are equipped with Bolo Sticks, and the staff and students regularly perform drills on how to use them.

“It’s nice because it’s consistent throughout the building. Every room has a Bolo Stick so every room can lock down,” he says.

Because the Bolo Stick has the potential to save lives, Barna says he tries to ship orders as soon as they come in, which isn’t as easy as it used to be.

Right now the status board on his wall “is filled with orders that need to go out.”

Which is why he’s looking at changing from a one-man band, to a duo, a power-trio, or maybe something resembling The Mothers of Invention.

“The worst problem you can have is when work gets really busy and you don’t have enough people to do it,” Barna says. “That’s where we’re at.”