YOUNGSTOWN, Ohio – Winter barely gave parts of the Mahoning Valley a white Christmas this year, and total accumulation thus far hasn’t been much. But it sufficed to get winter sports enthusiasts into local shops.

Snowmobiling is the most expensive of the winter sports, where first-timers can spend anywhere from $10,000 to $15,000 on equipment and clothing. It depends on what (and how much) they buy, according to GoSnowmobiling.org.

Johnny K’s Powersports in Niles has sold 20 snowmobiles so far this year and its sales manager, Joe Little, anticipates strong sales this winter.

“We had about eight or nine guys pre-order sleds [snowmobiles] in the spring,” Little says. “We sold about five or six of our used sleds and sold another seven or eight of the new sleds.”

Mild winters in recent years have dampened sales, he says, but they haven’t stopped avid riders from finding snow. Many customers who ride in deep snow – two to three feet or more – typically travel to the Snowbelt regions, including the upper peninsula of Michigan, Minnesota, Colorado and up into Canada. Trail riders usually need only six to eight inches for a base.

“A lot of guys will go out in their backyards and zip around some fields,” Little says. “New York is a big place for us as far as people doing some regular trail riding.”

Skiers similarly travel to find the best powder. Ski shops such as The Ski Chalet & Treasure Cove Scuba in Niles and R Ski Pools & Golf in Austintown organize trips to regional ski resorts, such as Peek’n Peak and Holiday Valley in New York and Seven Springs Mountain Resort in Champion, Pa. Day trips with Ski Chalet range from $65 to $95 per person and include lift tickets and bus transportation. 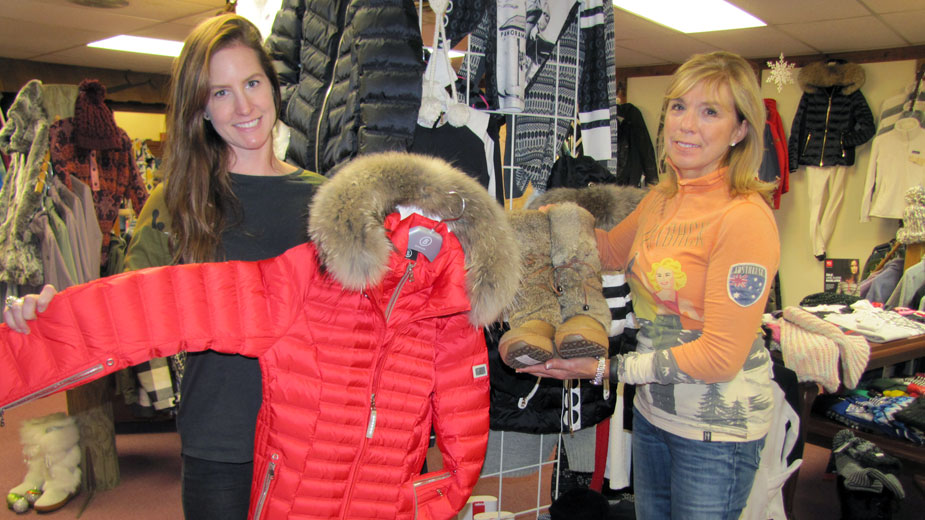 While snowboarding is still a big part of Ski Chalet’s winter sports business, skiing becomes more popular among those customers as they age, says co-owner Gary Hoff. Ski Chalet serves more skiers than snowboarders, but the latter buy more equipment, he says. Skiers replace their equipment every few years, but snowboarders are more interested in the newest gear.

“We have customers who will buy a new snowboard every year,” Hoff says. “And they know what they want.”

Some skiers haven’t updated their gear in 10 to 15 years, adds co-owner, Tom Hoff. The brothers bought The Ski Chalet with Tom’s wife, Sheryl, in 1984. The Hoffs say they’ve seen a renewed interest in skiing over the last few years.

“We’re finding that a generation is becoming grandparents and getting back into skiing with their grandkids,” Tom Hoff says. “They’re getting a restart.”

Equipment has changed since some of those skiers started, he says. Shaped skis that are shorter have replaced the longer straight skis. Shaped skis are narrow at the skier’s feet and wide at the ends, which allows for more control and easier turns. They also create an experience less demanding on the skier’s body, so the skier doesn’t tire as quickly, he says.

“They’re confidence builders. You’re more willing to go down a steeper hill and you become a better skier,” Hoff says. “We see very few straight skis on the hill anymore.”

R Ski provides tune-up services for skis and snowboards, including sharpening the edges, waxing the bottoms and polishing the bases smooth. Owner Rich Edwards recommends all skiers get their skis and bindings tuned up at the start of every season and after every 10 days of activity.

“If you don’t properly wipe down the ski, the metal edge rusts,” Edwards says. “When the edge rusts, it’s like shaving with a dull razor.” 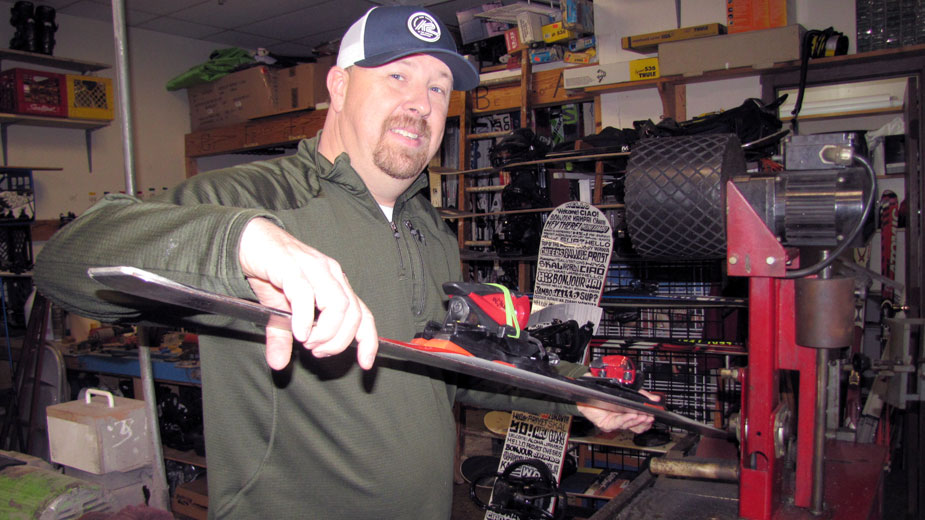 “It’s good for about four days of riding,” he says. “You can still ski after the wax has worn. But it just won’t be as smooth.”

Edwards says testing and tuning up the bindings on ski boots is important. Bindings connect the boot to the ski and hold it firmly in place. The strength of the binding is determined by the skier’s height, weight and boot length (from heel to toe in milli- meters). The type of binding depends on the skier’s skill level and style.

Edwards recommends annual tests of the bindings, especially of the large spring in the toe. “Ninety-eight percent of falls in skiing happen in the toe,” he says.

“I like to have everybody’s bindings checked every year,” he says. “If your weight changes by 10 pounds, get your bindings changed.”

In its 35 years of business, R Ski has organized annual trips as far as Utah, Colorado and parts of Canada in addition to its regional day trips. Some who go on the trips out west compete in races sanctioned by National Standard Race, better known as Nastar.

Edwards and his six employees have all competed in Nastar races and won medals at the platinum level, which is the highest rank. Edwards expects 34 people to go on the next trip scheduled Feb. 24 to March 3 in Park City, Utah.

Not all winter sports require snow. With the XXIII Olympic Winter Games in South Korea set to begin in February, renewed interest in ice skating is generating a surge in business for The Ice Zone in Boardman, says general manager and director of skating Matthew “Skip” Mackall. Between Christmas and New Year’s Day, the daily public skate sessions are open longer, starting at noon and going “well into the evening,” Mackall says.

“As soon as the weather changes, everything improves,” Mackall says. “That will extend through the Olympics and through April.”

The Ice Zone’s seven-week Learn to Skate program teaches skaters of all skill levels and ages, even as young as two years old. Classes are held twice a week, participants divided by age and ability. After completion, the more ambitious skaters can switch to one of the company’s Learn To Play programs, which include ice hockey and figure skating.

“You can start your skating here and go as far as you’re ambition is,” Mackall says.

Students can sign up for private lessons with the Ice Zone’s hockey or figure skating coaches, including Corey Carbone, a member of the Youngstown Phantoms Figure Skating Club.

Last April, the 21-year-old engineering student at Youngstown State University made his debut at the U.S. Adult Championships, winning gold in the men’s masters intermediate-novice division with a score of 49.74. He also placed third at the 2016 National Showcase in Streetsboro.

The figure skating club has 45 members. The Phantoms youth hockey program has more than 100 and is run by the Youngstown Area Amateur Hockey Association. It’s also part of Sidney Crosby’s Little Penguins Learn to Play Hockey program, which helps supply some of the participants with equipment. To start, students need the minimum of a stick, helmet and gloves.

“I always say to get a chest protector and a neck protector,” Mackall says.

The Ice Zone organizes a recreational hockey program with about 50 members. All games are played at the rink, so no travel is involved.

“They’ve been here since the day we opened in 1997,” Mackall says. “You’d be amazed at how many doctors are in it.”

For casual skaters new to the activity, Mackall recommends they overdress in comfortable clothing so they can remove layers should they get too warm. Gloves or mittens are also recommended, and he says many parents have their kids wear bike helmets when they’re starting out.

The Ice Zone lends skates to Learn to Skate students, and staff can help customers decide which skates to purchase if they want to buy their own. Mackall recommends wearing skates “snug to your foot” so new skaters can avoid blisters and that skaters sharpen their skates every 12 to 14 hours they’re on the ice.

Above all, he advises newbies not to get discouraged too soon. Skating is a lifetime sport, he says, and people can start at any age.

“We have many people out here who skate who are in their 70s,” he says. “You can do it forever, and we have classes for anybody. We can teach anybody to ice skate.”