YOUNGSTOWN, Ohio – Mike Hatch eyes a large plate of glass as it’s gently placed flat on an oversized table, preparing to be cut to size before it is further processed and shaped.

Hatch, the shop foreman at Youngstown Mirror & Glass Co. in Austintown, is a master freehand-glass cutter, and it’s important that the plate be cut to the precise measurements the customer desires.

“We hand-cut everything here,” he says. “There are no machines, no robots, no optimizers when it comes to this craft.”

Instead, the craftsmen use a sharp blade to score the glass down the middle and then carefully lift the plate until the sound of a clean, perfect break echoes through the workshop.

Hatch has worked at the company for 45 years and is preparing to retire. His son, Mike Jr., is in line to assume many of his duties once he’s gone.

“When I started here, we just stocked a little bit of everything. We maybe had two or three cases of glass,” Hatch recalls. “Now, we have hundreds. We just kept adding racks.”

Hatch’s craft hasn’t changed much since the company was founded in 1918, says Gary Fitch, today the president and owner of Youngstown Mirror & Glass. What has changed, however, is the market, buying trends and the extraordinary growth the business has experienced. 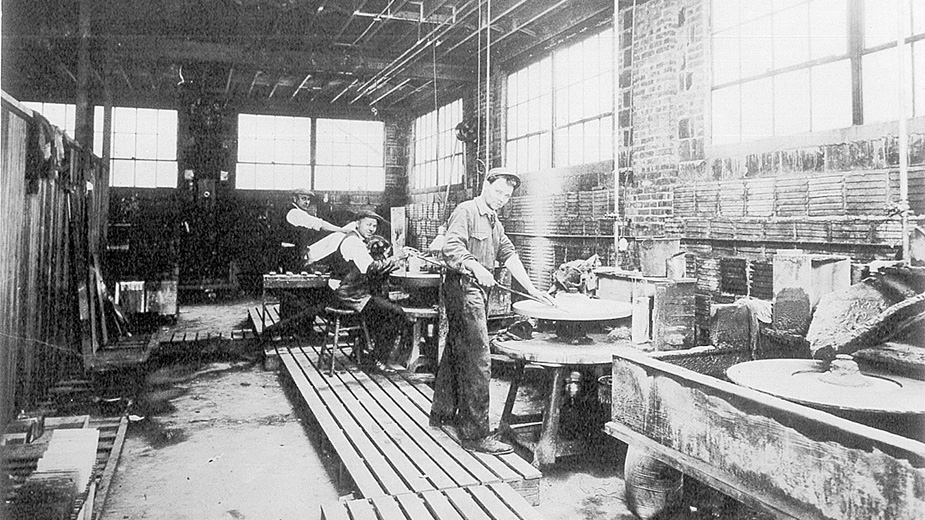 Pictured: How workers hand-cut glass hasn’t changed much since Youngstown Mirror & Glass Co. was founded 100 years ago at 655 Market St.

“Last year was our strongest year as a company,” Fitch says. “We did upwards of $4.5 million in sales and this year should be similar or better.”

The company was established a century ago as the Youngstown Mirror and Art Glass Co. by Phillip Ley on the 600 block of Market Street in Youngstown. Then, the company applied the silver base for mirrors and cut glass from old-fashioned cylinder-blown sheets, a process that today has been replaced by machine manufactured glass.

Youngstown Mirror’s “art glass” used in doors and windows were framed with zinc or lead-based bars, and remain evident in some older houses of the Mahoning Valley.

Sometime during the late 1940s or early 1950s – Fitch isn’t sure of the exact year – Ley sold the business to his son, Philip A., and Fitch’s grandfather Chester Fitch.

“My dad, Jack, bought out my grandfather’s share in 1961,” he says, while Bob Dyer, Philip A. Ley’s son-in-law, bought the remaining shares. The two worked as business partners until Jack’s retirement in 1999.

Gary then purchased his father’s shares and served as vice president until Bob Dyer’s death in 2006. The following year, Fitch purchased the rest of the company and today is sole owner of Youngstown Mirror & Glass.

“I’ve got to give credit to the gentlemen who in the past laid the foundation for this company,” Fitch says. “We had some good owners and we have a tendency to hang on to good employees.”

Hatch, for example, started his career at Youngstown Mirror in 1973, when Fitch’s grandfather was co-owner of the business. “I started with the first generation of Gary’s family in this company,” he says. “Now, I work for him.”

It’s not unusual for the company to keep longstanding employees, Fitch says. “Last year, we had two retire – one with 36 years and another with 35 years,” he says. “Others that work here have been here for 15 or 20 years.”

By 1960, Youngstown Mirror had relocated to a new building along Mahoning Avenue. In 1987, the company moved to its present location, 3991 Henricks Road.

“We can do anything from screen door repairs, storm windows, tabletops – all the way up to multi-million dollar projects such as schools, hospitals, and storefronts,” Fitch says. “Anything in the glazing industry.”

The handiwork of the company is evident across the Mahoning Valley. Youngstown Mirror provided the glass for the Nathaniel R. Jones Federal Building and U.S. Courthouse in downtown Youngstown, the new Chick-fil-A in Boardman, and projects for the Austintown, Lakeview, and Jackson-Milton school districts.

This year, the company secured a contract to provide the glasswork for a new school in Cadiz, Ohio, Fitch says. At present, the company employs about 19, but should increase to about 35 once the construction season hits full stride.

Glass and mirror is delivered to the company in plates of various thickness and sizes, all of which are standing upright in racks in the inventory area. Once the products are cut, the glass moves to the shaper room, where glass shaper Jesse Holbrooke polishes the edges to a smooth finish.

While the glass cutting is performed by hand, there is some automation in the shop that allows for more efficiency related to time and safety, Fitch says.

An automated high-speed fan dries glass after it’s cooled with water, and a new, computer-controlled shearing machine can bend and cut metals used to cap or cover exposed wood or other metal columns on a new commercial project.

“We used to outsource the shearing,” Fitch says. “Now, we do it all ourselves. We’re more automated than we used to be.”

A computer-controlled saw used to cut aluminum profiles to a specific length, for example, was recently introduced to enhance operations, Fitch notes.

“In the past, a person had to hold the product by hand, so it could be dangerous,” he says. Through the new process, the aluminum is fed through a line and into a saw that is enclosed in a protective housing and programmed beforehand to cut the piece to a specific length for customers.

“I’d say everything we do is custom,” Fitch says, as he gestures to a narrow, curved piece of blue glass resting upon a white backing. This particular piece is for a furniture designer who uses Youngstown Mirror to cut intricate designs – in this case glass that simulates a river running across a tabletop or dresser. “We sell one of these every week, or at least every other week.”

Demand for mirrors is not as robust as before, Fitch says. However, the residential market remains very strong, evidenced by new orders for glass bathroom shower doors.

“This part of the market has really taken off,” Fitch says. “We’re probably doing six to eight shower doors a week. Thirty years ago, we would do two a month.”

Pictured at top: Gary Fitch owns the company, which is growing with demand for glass shower doors.