Youngstown Thermal Not Out of Steam, Not Yet

YOUNGSTOWN, Ohio — A company based in Canada that produces fuel from wood waste is considering Youngstown as a site for a new production plant. But there’s a catch – a big one.

In order for Ensyn Corp. to fully commit to building such a plant, the city would have to assume ownership of Ensyn’s largest customer in the area: Youngstown Thermal Cooling LLC.

The project could create as many as 200 jobs and provide an additional source of less expensive and renewable fuel for potentially more customers within a 100-mile radius in northeastern Ohio and western Pennsylvania, according to the report.

It’s the latest twist in the ongoing efforts of Youngstown Thermal to stabilize its operations and emerge from receivership. Last year, Mahoning County Common Pleas Court Judge R. Scott Krichbaum appointed Reg Martin as receiver to handle the affairs of the struggling district heating and cooling utility after the company faced disconnection of its gas, water and electric services. The company supplies 32 customers and 40 buildings in downtown Youngstown with mostly steam-heat services and some with cooling. Any disruption would have severely impacted commerce across the central business district.

Ensyn Corp., established in 1984, operates a biofuels production plant in Ontario and recently completed a new plant in Quebec. The company provides about 70% of Youngstown Thermal’s fuel, which is less expensive to burn than natural gas, says John Rambo, general manager of Youngstown Thermal.

“No one else burns it in Ohio,” Rambo says. “It’s priced at a discount, so you’re saving money. And, it’s green.” Once the Quebec plant comes online, Ensyn would provide more than 90% of Youngstown Thermal’s fuel, he adds. 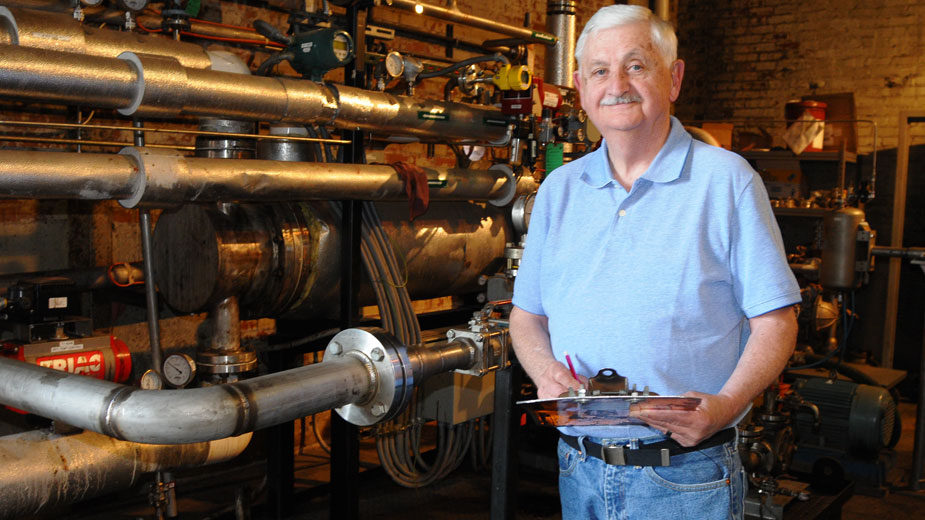 Rambo says Ensyn has been in touch with city officials about locating a plant in Youngstown. Yet there are caveats, one of which is that the city take control over Youngstown Thermal’s business and effectively jettison it from receivership. “Ensyn would prefer that, because if that plant is going to serve us, they want a guarantee that whoever owns the plant will burn their fuel,” he says.

The project could yield as many as 200 jobs when construction, transportation, processing and manufacturing positions are factored in. “There would probably be about 50 full-time jobs directly at the plant,” Rambo says.

That’s assuming the city wants the responsibility of running a district heating and cooling system – a prospect that isn’t well received by Mayor Jamael Tito Brown.

“We’re not seriously considering taking on Youngstown Thermal right now,” Brown says, and any discussion of Ensyn building a new plant in the city is very premature.

While Brown says there’s no question that the city must play some sort of role in helping Youngstown Thermal any way it can, owning and operating the plant isn’t a solution that is on the table in his administration. “We just don’t want to be in the business of public utilities – at least not at this time,” he says.

Of paramount concern is the aging infrastructure of Youngstown Thermal’s system, Brown says. “The infrastructure is so old, and from what I’ve seen the upkeep would be a hindrance. We haven’t seen a long-term plan and at this point, we haven’t found a benefit.”

Fourth Ward Councilman Mike Ray, who chairs council’s public utilities committee, says he attended an advisory board meeting with representatives from Youngstown Thermal in June during which he was informed about Ensyn’s intentions.

Still, Rambo contends that operating the plant would be akin to running a municipal water department, and the city could leverage its clout to encourage more customers to join the system. “The city could operate it cheaper, and it could save the city money,” he says. “The biggest obstacle is risk mitigation – the costs of unexpected issues.”

The risks could range from line breaks to a more recent problem with the company’s chiller plant on West Boardman St., Rambo concedes. An electrical outage along FirstEnergy’s system suddenly shut down the chiller operation, which caused the solution in some of the tubes to crystallize, forcing one of them to rupture.

Downtown businesses such as The Vindicator, Home Savings Bank and the Youngstown Business Incubator were affected by the sudden loss of cooling service. The chiller was offline for three weeks and resumed operation on June 27. Obviously, these customers were very unhappy.

Nonetheless, the district heating and cooling utility continues to make improvements in its efficiencies and operations, Rambo says. The most prominent of these improvements is the new biofuel system that started operation in April.

The fuel used by Youngstown Thermal is derived from wood chips and sawdust that are byproducts of the timber industry. The wood is heated to its flashpoint, where it’s converted into gas and then cooled and turned into liquid fuel.

That fuel is transported to one of Ensyn USA’s distribution hubs, and then trucked to Youngstown Thermal’s main plant on North Avenue in Youngstown, where it is pumped into a 40,000-gallon holding tank.

From there, the fuel is transferred to a system that heats it to 160 degrees, and then is pumped to heat the plant’s boilers. A network of pipes buried beneath the downtown transports the steam to customers across the central business district.

According to Youngstown Thermal’s court filing, the company estimates it could save more than $1 million in costs next year alone because of its conversion to renewable energy from coal and natural gas.

“All of it is green fuel,” Rambo says, as an aroma of hickory fills the part of the plant where the new system is installed. “Once the new Ensyn plant is producing, then we’ll be 90% to 95% green.”

Indeed, Youngstown Thermal’s prospects are much warmer than they were a year ago, reports Reg Martin, the court-appointed receiver. “Last year, we were looking at a $1.8 million deficit,” he says.

The conversion to renewable fuels, plus other actions such as temporary, emergency surcharges enacted in late 2017 and a final tariff approved in April that called for a rate hike across the system, have allowed Youngstown Thermal to reach a financial break- even point.

This year, the utility’s revenue is budgeted at $1.9 million.

The rates approved in April were higher and calculated by assessing each customer’s annual usage and dividing it by 12, ensuring level billing each month over the course of the year. Larger customers on the system are able to negotiate separate agreements with Youngstown Thermal, Martin says.

“We’re one of the larger customers,” says Tom Gasce, president and CEO of the YMCA of Youngstown. “They’re going to be negotiating a new contract with us, but we haven’t sat down yet.”

Gasce says the surcharge was difficult to absorb, since the YMCA is a nonprofit that has to pay attention to costs. However, the heating service has proven reliable over the course of this year, he adds, and was not affected by the chiller outage since Youngstown Thermal does not supply cooling services to the Y’s Central Branch.

The surcharges were suspended after three months and the current rate scale took effect with the May 1 billing. “The surcharge hit us hard. Everything has been fine with the service, but we still have to watch our dollars,” Gasce says.

For Thermal and its receiver, the greatest challenge is retaining customers while attracting new ones to the system, which is critical to sustaining the business.

YSU, which at one time accounted for more than half of Youngstown Thermal’s revenue, opted to construct its own boiler system and has been operating it for more than a year.

Yet in order to accommodate the hospital, Youngstown Thermal would need to procure funding to extend a new pipeline from the North Avenue plant to the boiler room in the Belmont Avenue hospital. Accordingly, the company is pursuing grant opportunities that would help bring that project to fruition. The estimated cost is about $1 million, Rambo says.

According to Youngstown Thermal’s report to the court, securing Mercy as a customer would “provide significant additional revenue,” for the company. The document adds that the hospital’s boilers would likely need to be replaced in the future, and the health system has expressed its desire to use green energy.

The company has hired a grant writer out of Cleveland to seek funding for construction of a new pipeline and for other modernization efforts at the plant, according to court documents. Among these upgrades would be replacing an old coal-burning backup boiler with a renewable fuel burner, the installation of a new chiller and the remediation of materials such as asbestos inside the plant.

More recently, Youngstown Thermal executed an agreement with its former customer – YSU – in which both parties have agreed to provide steam heat services to one another in the event of an emergency.

Rambo says the company is also seeking assistance from the Public Utilities Commission of Ohio. “They know we have a unique problem here,” he says. “They’ve been good as far as consulting and advising us. We’ve improved our operations and without them, we probably wouldn’t have survived.”

Some of the immediate changes came with staffing levels at the plant, Rambo says. In 2011, Youngstown Thermal employed 25; today it employs 14.

“The only difficulty we have is maintaining everything with a skeleton crew – that’s been a chore,” he says. Plus, it’s difficult to find licensed boiler operators in the labor pool, since fewer people are moving into that occupation.

“In the old days, they used to come right out of the Navy,” Rambo recalls. “Today, the Navy doesn’t use boilers on their ships anymore.”

Still, he observes that the transition of Youngstown Thermal has gone “better than I ever anticipated,” and the improved financial condition of the company has allowed it to perform deferred maintenance on older pipelines downtown and the installation of some new valve components.

There is some interest by private operators who could step in and manage the plant – which he deems too costly for customers – but no firm offers to purchase its assets. “There have been inquiries, but no one has made an offer,” he says.

That leaves city ownership of Youngstown Thermal as the best-case scenario, according to the receiver’s third report.

“The receiver is taking all necessary steps and actions to accomplish the goal of the city of Youngstown owning and operating this public utility,” the document says.

“The receiver has explored other options or exit strategies and determined that city ownership is the best solution available to insure [sic] stable utility service for the community at a competitive rate for years into the future.”

by The Warren Flea & Farmers Market - 4 hours ago