YOUNGSTOWN, Ohio – Giving back and lifting others up has been integral to every role in Amber Wallace’s career.

The executive vice president and chief retail and marketing officer at Farmers National Bank, Wallace leads a team that brands one of the area’s top community banks.

She mentors students in the college program, who come to get their first taste of the banking industry over the summers and breaks. She asks employees about their goals and ambitions, helping those interested in management promotions get on track. She inspires others by sharing the story of Farmers President and CEO Kevin Helmick, who started his career as a teller.

“We really do believe in career pathing, bringing people along as far as they want to go,” says Wallace of the Farmers’ philosophy.

Helmick describes Wallace as both strategic and community minded, adding “Amber is the epitome of the saying ‘if you want something done, give it to the busiest person.”

That could be connected to her belief that a sense of will and urgency is vital for success.

“I always have this sense of urgency about me, and it creates excitement,” says Wallace, adding she works with a team of people who are similar to her. “We’re all urgent, we all have strong will. We all want to get things over the finish line. And when you are all like-minded, it’s kind of a contagious type of thing.”

Wallace has been getting things over the finish line since she started her career after her graduation from Youngstown State University, where she earned a degree in communications. In her first job, with the American Cancer Society, she began making a difference for others.

“She was the glue that held the Relay for Life together,” said Dr. Bob Brodell, tenured professor and founding chair of the department of dermatology at the University of Mississippi Medical Center. “She helped make this event what it was back in the day.”

Brodell was part of the early Relay for Life events in his native Warren, where Wallace organized the first one in Ohio in 1993. He credits Wallace with mobilizing dozens of volunteers and thousands of survivors, tying up all the loose ends to create an incredible event.

Under Wallace’s leadership, Brodell said it grew to raise a little more than $1 million and touch many affected by cancer. It became the largest grossing Relay for Life in the state at the time, attracting all ages.

“It was a fun event and Amber also knew about fun,” Brodell says. “She made it so that people, after they worked fundraising for a year, could come and feel [they] had done something meaningful.”

After more than 11 years organizing Relay for Life, first locally and then on state and national levels, Wallace took what she calls her “development and philanthropy hook” to Trumbull Memorial Hospital, then part of Forum Health. She worked with the foundation, grew into a marketing role, and worked with the physicians.

“Again, it was just a dream job,” says Wallace, adding that having such a leadership role while in her mid- to late 30s was a fantastic opportunity.

Jeff Hedrich, president of The Prodigal Company, first met Wallace when he directed a video helping highlight the Relay for Life to other organizers and worked with her again through her role with the hospital.

Hedrich says Wallace understood early on it was not enough to sell the hospital’s brand to the public. It was important to lift the employees up to feel valued and appreciated.

“It’s one thing to communicate your brand to your patients, but if your employees are not aligned with that brand, especially [in] health care where they deliver a service, it’s fruitless,” Hedrich says.

Wallace encourages employees to not only grow in their careers, but to give back to their communities as well. Like many on Farmers’ executive team, Wallace sits on various charitable boards, including the Boys and Girls Clubs of Youngstown, where CEO and Executive Director James F. Bird is just discovering how Wallace can help the organization.

“Right away I noticed she’s got a strategic eye about what we need to do,” Bird says, adding they are pleased she brings her expertise in banking, finance and community relations.

Wallace is compassionate, but likes to give others a hand up, not just a handout, says Hedrich. She gets involved in organizations with a mission similar to her own, helping others become the best version of themselves and encouraging everyone to do their best work, both without discouraging them or lessening her high standards.

One of the ways Wallace encourages employees at Farmers is through a program she credits to Helmick.

“Our mantra is “In It To Win-Win It.” We believe when we create wins for our stakeholders, our community, our associates, our partners, when we create those wins first, then our wins at the bank will follow,” says Wallace.

Although the Win-Win focus started in March 2020, Wallace says they are planning to expand it by more publicly highlighting the good things Farmers and its employees are doing in the community, like a recent sock drive led by a district sales manager in Trumbull County to benefit the Warren Family Mission.

Farmers often helps local causes by providing donations to the charities employees are giving their time and talents to support.

“Being involved in your community and deploying capital to build thriving communities, that’s what community banking and Farmers is all about. That’s why it’s such a great fit for me,” Wallace says.

Pictured at top: Amber Wallace is the executive vice president and chief retail and marketing officer at Farmers National Bank. 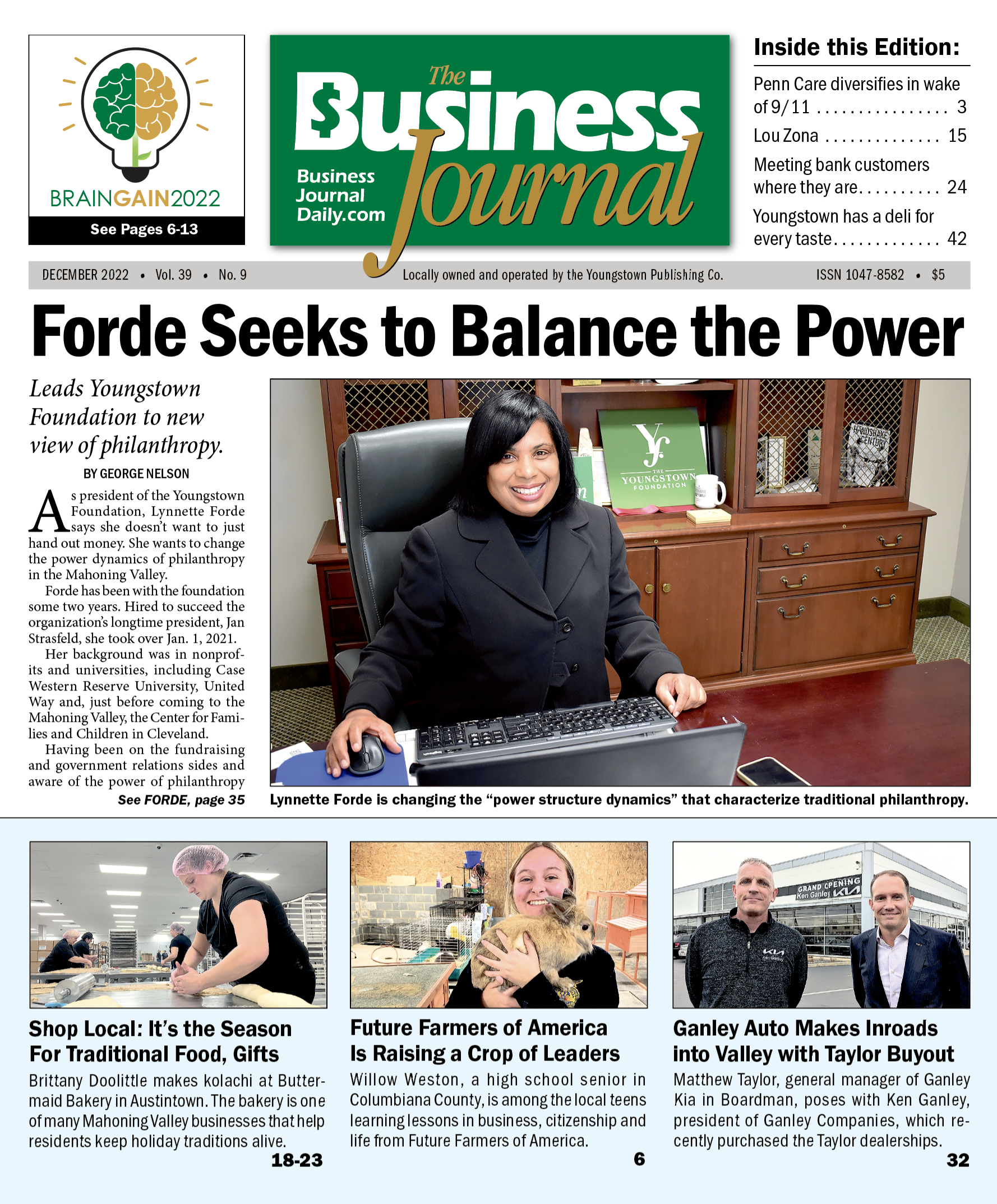