YOUNGSTOWN, Ohio — Reeling from a coronavirus shutdown that is suffocating their businesses, owners of restaurants and banquet halls wonder when the crisis will end and how long it will take to recover.

All restaurants have been limited to takeout or delivery service for weeks because of prohibitions against public gatherings.

After the “stay at home” order Gov. Mike DeWine issued March 23, just about every restaurant in downtown Youngstown has temporarily closed and so has the 20 Federal Place building and its food court.

The vast majority of those who work at restaurants have either been laid off or had their hours sharply cut. They are eligible for unemployment benefits but the state systems are bogged down by the sharp increase in applications and delays are the norm.

In Sharpsville, Pa., Tiffany Daley, owner of Breakfast at Tiffany’s, shuttered her restaurant March 20, putting 13 people out of work.

She calls it “one of the saddest days I’ve had.” The decision, she says, was unavoidable.

“We started doing carryout only and sales were OK, but not enough to keep up with our overhead,” Daley says. “We spend $5,000 to $6,000 a week on food. We have no drive-thru; so people were walking in and then standing there. And now there is a student in Sharpsville schools with coronavirus.”

Daley teaches culinary arts at Trumbull County Career and Technical Center, “So I have a paycheck still coming in,” she says.

She started Breakfast at Tiffany’s 16 years ago, and knows firsthand how long it takes to build up a clientele.

She worries about those who are just starting out in the restaurant field. “It was tough for me to make payroll and pay bills the first few years,” Daley recalls. “Businesses that are just starting and don’t have the following, and have debt … my heart goes out to them.”

Daley feels fortunate, she says, because she has a small revolving loan and other options to use for emergency funds.

She refuses to apply for an SBA loan, regardless of how good the terms. “I paid off my restaurant and I don’t want to get behind again,” she says. “And I told my staff, ‘Don’t get behind. Make minimum payments. Apply for unemployment benefits.’ ”

Summer is her busiest time of year, and she hopes that an extended shutdown doesn’t undo the years she put into building her business.

“There is a ripple effect,” she says. “When people do get back to work, they will have to get caught up on so much debt, and that will hurt us down the road. It’s going to take time.”

John Marino is the owner of Mojo’s Pub and Grill, Tavola catering hall and the Comedy Cellar, all in Austintown. He employs 35 but had to lay off 85% of his workforce. “We asked our staff members, ‘Who can afford to not work?’ ” Marino says. “It was mostly college students who live at home who got laid off first.”

“And now that there are even more out of work, will that level be maintained?” he asks.

He is keeping Mojo’s open for curbside pickup and offers delivery through third-party food services such as Grub Hub and Door Dash – which, he notes, take 20% to 25% of the check.

As a restaurant-pub, Mojo’s has a 60:40 to 70:30 revenue split between food and alcohol. “Right off the bat, the alcohol [revenue] was wiped out,” Marino says.

And he was forced to close his comedy club and his catering hall. “Tavola just lost over $20,000 [in business],” Marino says. “It’s just sitting there empty. People are canceling left and right. All of March was canceled. And now all of April … baptisms, communions, graduations. I’m lucky I still have Mojo’s.”

He is nervously looking ahead to Mother’s Day, May 10, which is the biggest day of the year at his restaurant.

Like Daley, he fears that newer restaurants will be forced to temporarily – if not permanently – close as the shutdown continues. “Who can pay their rent? Their suppliers? Their loans?,” he asks. “You will see one or two shut down every week.”

After the virus is under control and life returns to normal, Marino believes it will be a year or two before the restaurant industry bounces back to pre-virus levels.

“If you’re out [dining] and you see someone coughing, there will be paranoia,” he says.

The closing of restaurants and bars and the order to stay at home has forced the layoff of most of the 75 employees at Los Gallos Mexican restaurants in Boardman and North Lima, and El Cowboy in Austintown, all owned by Israel Zambrano.

The three restaurant-pubs are staying open for carryout and are also offering free delivery.

Manager Wayla Agee says the shutdown is putting the spotlight on the importance of restaurants like hers. “When this is over, I think the public will have a better appreciation for local business,” she says.

Los Gallos also has a food truck that remains in business.

“We’ve been taking it to local hospitals and to the Sam’s Club and Wal-Mart parking lots,” Agee says. “It’s a lot of fun.”

El Cowboy was forced to cancel its inaugural St. Patrick’s Day celebration, a massive party that was to take place at the restaurant and also in a tent in the parking lot.

Because this was to be its first year, there is no way to determine how much revenue El Cowboy missed.

Blue Wolf Tavern in Boardman has idled the vast majority of its 70 employees, as its sole focus has become takeout service.

Owner Joe Rzonsa says he is helping his staff any way he can in these trying times. “When you lay someone off, they will not find another job,” he says. “Nobody is hiring in this industry.

“We want to do our best to get [our employees] to stick around. We are splitting up the minimal amount of shifts that are left so that workers can still collect unemployment because of the mass reduction in wages but also get a day or two of work here and there to pick up some dollars, some pocket money. And so far everybody has wanted to do that. They are helping with carryout, and cleaning and sanitation.”

Rzonsa also owns Blue Wolf Events and Catering, which has exclusive catering rights at the Maronite Center on the west side of Youngstown. The company also provides catering services at other venues, including church halls, schools and businesses.

About half of its catering business comes through the Maronite Center, where all scheduled events have been canceled.

“Everything is canceled well into April,” Rzonsa says. “People are getting nervous about their high school graduation parties. We have 50 to 60 scheduled at this point but so far we haven’t rescheduled any of them. We’re hoping the situation resolves itself by then.”

And Rzonsa says he is “real nervous” about Mother’s Day. “We have a large [buffet] at Maronite Center and at our restaurant,” he says. “It’s one of the biggest days of the year. Regardless of [the status of statewide restrictions against public gatherings], it’s going to be affected because people will be apprehensive.”

Coaches Burger Bar had to lay off 140 employees across its six restaurant-pubs March 15, maintaining crews of two people at each location to handle takeout service. A week later, it closed two of its branches: Lisbon and Canton.

“We’re down to four,” says owner Patrick Howlett, explaining the two locations shut down are the newest ones and hadn’t yet established customer bases as strong as the others.

Howlett fears the effects of a long-term shutdown. “I don’t think our economy can handle being closed for long after Easter,” he says. “Federal bailout or no, you have to turn on the lights and get people back to work.” 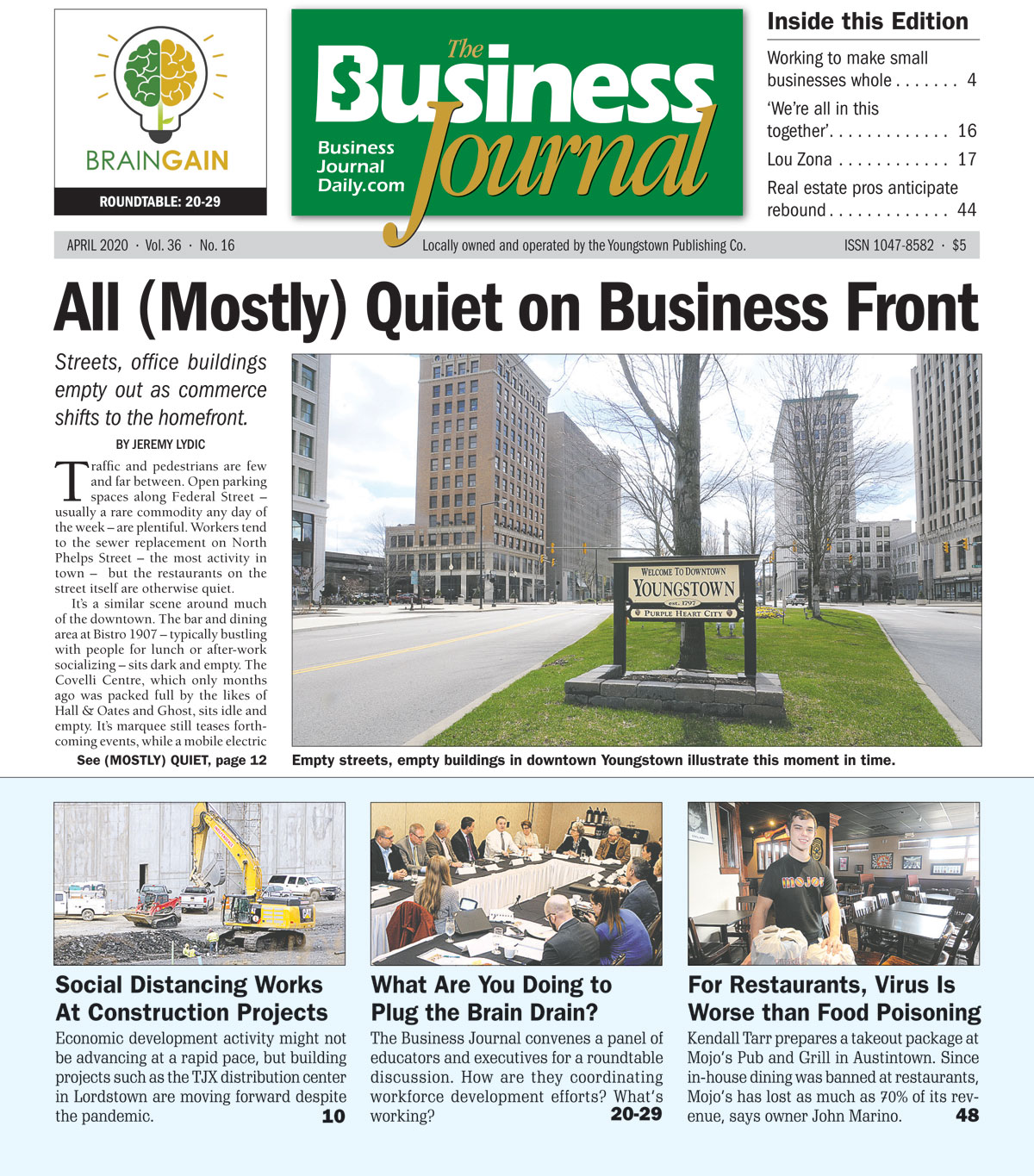