YOUNGSTOWN, Ohio — Youngstown celebrated its 222nd birthday Wednesday and a party thrown by the Mahoning Valley Historical Society and Youngstown Cityscape unveiled a look at the present and future of some of the city’s landmarks.

“John Young and his party of people arrived at the Spring Common area on June 27, 1796, and began their work in creating what we have here today,” said Tracy Manning, curator of education with the Mahoning Valley Historical Society. “Downtown has changed drastically many times in its history and we hope to highlight those changes on the tour.”

At the Happy Birthday, Youngstown! celebration, the history society and CityScape unveiled five new signs for its walking tour.

“We have found that many people are generally aware of the revitalization taking place downtown, but are not always aware of the details or the interesting historical backstory of specific buildings or locations,” said Phil Kidd, associate director of Youngstown Cityscape.

Since starting the tour three years ago, Kidd said the crowds have increased. However due to staff schedules not everyone could attend. The decision was made to introduce self-guided walking tour stands.

Each stand features the history of a location with a series of photos that leads tour members through a timeline to present day. At the bottom of each sign is a QR code that can be scanned with a smartphone. The code links to a website that details the site’s current use and future plans, as well as YouTube videos, newspaper articles and quotes from locals. The signs also include a list of contributors to the program.

“These are our first five,” said Kidd. “We have three other locations that we would like to move forward with. We want to keep expanding the project through additional sponsorships.”

Mayor Jamael Tito Brown and family were present for the party. After singing “Happy Birthday,” the crowd watched as Brown blew out the candles and all were invited for cake and refreshments. 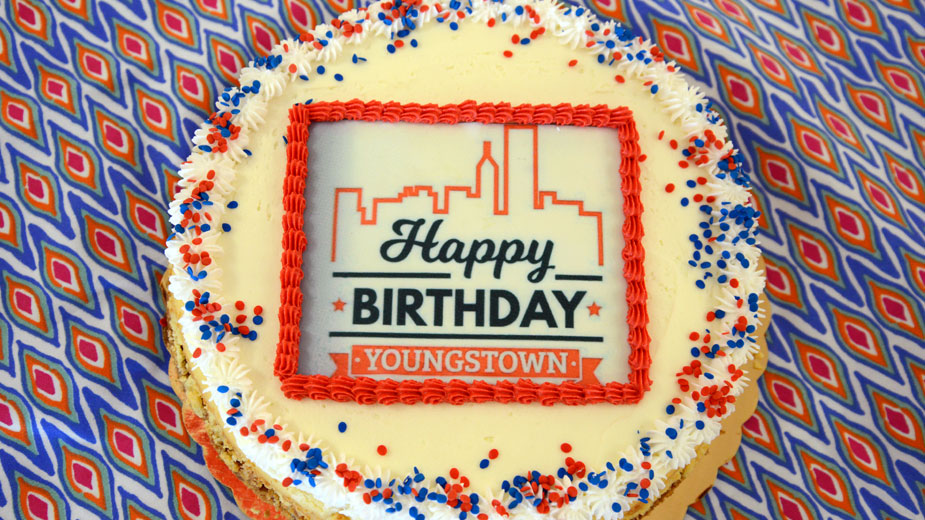 The walking tour includes a stop at the former Warner Theatre on West Federal Street, which was to be a memorial dedicated to brother Sam Warner by the famous Hollywood trio Harry, Jack and Albert Warner. Another art deco style building on the tour is the Central Tower on West Federal. Built in 1929, it was restored in 1975 and purchased a year later by Metropolitan Savings and Loan.

Other stops listed are the Steel Museum on Wood Street and a stop at the home of one of the city’s former newspapers the Telegram, at 107 Vindicator Square, built in 1930.

Stand locations and topics include:

Patty Hawkins and her son, Nathaniel, enjoyed the party and listened with the crowd at each stop on the guided tour down town.

“This is our Cub Scout meeting tonight,” said Hawkins. “We just thought we would do something different, have some community experiences. We are here just learning all about the city.”

“I know who the mayor is now,” her son added.

Pictured above: Wednesday’s walking tour stops at one of the new tour signs at the Youngstown Birthday Celebration.

Voting for Inspirational Person of the Year begins Monday

YOUNGSTOWN, Ohio – Starting at 8 a.m. Monday, Mahoning Valley residents can vote for the 2022 Inspirational Person of the Year. The honor, sponsored by the Spanning the Need podcast and The Holly Ritchie Team real estate agency, recognizes individuals…