YOUNGSTOWN, Ohio – In 1988, when Theresa Moon saw the house her father, Scott, had bought, it wasn’t exactly the picture of beauty. It had sat empty and unattended for years. He bought it for $5,000 after it had been deemed unlivable.

But he and the rest of the Moon family – his wife, Mary, along with Theresa and her brother, Michael – put the work in to make it a home. For two years, they renovated the house at 2010 Elberen St., before moving in. And in the following decades, he continued his work, adding a patio, deck, garage and family room.

After he died in 2015, Theresa Moon kept up his life’s work. And on Tuesday, 30 years after her father bought the house, she accepted one of Youngstown CityScape’s Beautification Awards.

“He saw the house and its potential. He said, ‘Let’s go for it,’ and we spent two years making it habitable,” Moon said at the awards ceremony, noting that she was accepting the award in his honor. “It’s my gift to him to keep this going.” 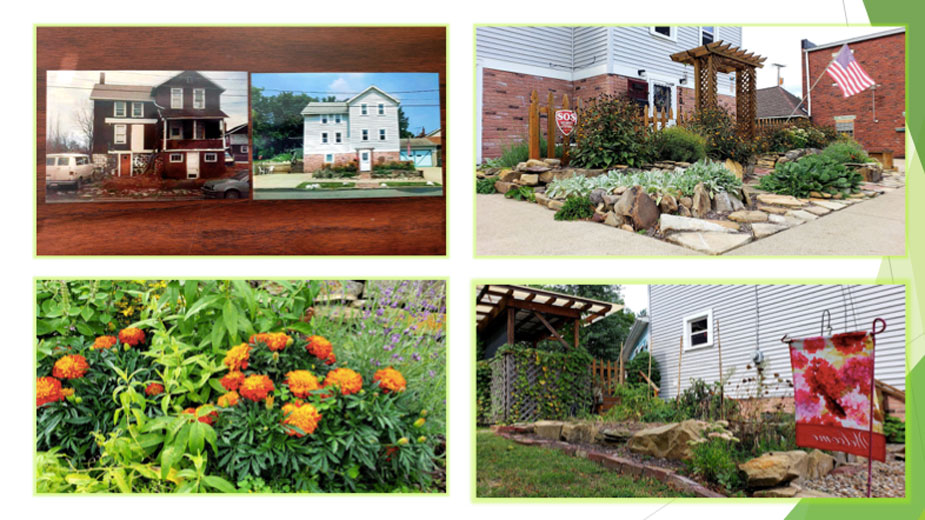 When Scott Moon purchased the house at 2010 Elberen St. in 1988, it was deemed unlivable.

Moon, who co-owns with her brother ST Sales Inc. on Salt Springs Road  just a couple of blocks from the house, says that it was her father’s work, both in the home and at Valley Mould & Iron Corp. in Hubbard, that helped her get to where she is today.

“My father was a self-made man. He had very little schooling. Everything he did and everything he had in his life, he worked for,” she said. “And that’s what he taught me and my brother.”

The Moons were among the 13 businesses, organizations and Youngstown residents honored at the CityScape annual awards. Joining them in the residential category were Petra Rios, 1710 State St.; Tommie and Vernell Harris, 584 Willis Ave.; Karen Wright, 939 E. Boston Ave.; and Paul Peace, 302 Midlothian Blvd.

Recognized in the community category were YSUScape for its downtown utility box art project and mural at the Youngstown Business Incubator, Anson Hankey for his design of the Wick Park community information sign as part of an Eagle Scout project, the Community Corrections Association Inc.’s greenspace expansion for the Boys & Girls Club of Youngstown and Flying High Inc.’s GROW Urban Farm.

“Every year, I think, ‘Next year, we’ll never be able to have this many,’ and every year I’m amazed at people’s diligence and the variety of projects and the heart they put into it,” said Sharon Letson, executive director of CityScape. “They’re really making a difference citywide.” 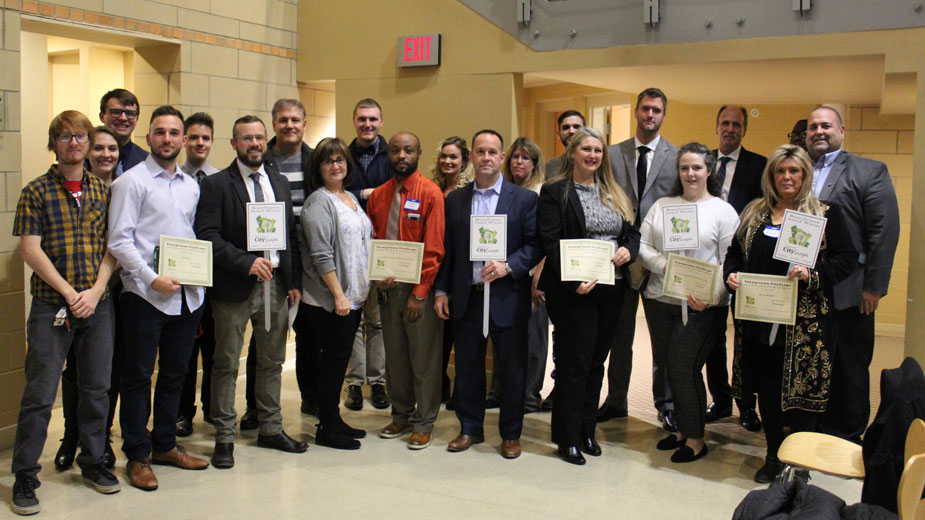 Some of the projects, like the renovation of the Stambaugh Building into a DoubleTree hotel, are easily noticeable while others like Nexus Sound Studio’s work on a new recording and production studio on Mahoning Avenue are more subtle. For the Nexus project, owner Alex Thomas and his team redid virtually all of the building at 715 Mahoning Ave., inside and out. Overgrowth was cleared from the property, the building painted and the interior given a completely new look. Outside, one wall has been left blank for a mural.

“When you go to L.A. or Miami or places like that, there are murals everywhere. It’s beautiful and it makes the city look nice,” Thomas said. “They’re colorful and draw attention to properties and draw people in.”

What attracted Thomas to the site just over a year and a half ago, he said, was its proximity to the city’s arts scene. Downtown Youngstown, the Calvin Center, Hopewell Theatre and Easy Street Productions are all within walking distance.

“There are a lot of people in this area who are very talented in all different kinds of art. There’s not really a huge outlet for them in this area,” he said. “The creative side of things brings good out in people and can keep them out of trouble. It’s important to give people an outlet to express themselves in whatever way. Youngstown needs a lot more of it for the people who want that.”

And downtown, Eastern Gateway has put work into improving the look of Youngstown campus, adding landscaping to the planters outside and painting benches and railings. For years, students and staff have taken part in CityScape’s annual Streetscape day.

“We want to bring more people downtown. How do we do that? You make sure your college looks beautiful. You make sure the landscaping is beautiful,” Art Daly said. “It’s all a partnership. That’s why we’re doing what we’re doing. In the long run, that does bring more students to the college.”

In his two years as head of the campus, Daly said the beautification work has turned from an effort lead by staff to “a strategic plan to expand as we go forward.” New signage will come with the opening of Eastern Gateway’s space in the Harshman Building in the spring and he’d like to see the addition of lights that project onto its current building.

But what could really boost the curb appeal of the building – “You can say it. It’s a parking garage,” he said with a laugh – and the district as a whole is development.

“I’d like to develop that eastern side of Federal [Street] to make it into a district where we can add more plants, trees and businesses on that side because it’s kind of barren right now,” he said. “We have, hopefully, a new restaurant downtown. We’re hoping to sign on that [Wednesday].”

Big and small, CityScape’s Letson said, the projects add up to make Youngstown a brighter place.

“Everyone has a role to play, whether it’s a business or a resident mowing five or six lots in their neighborhood. These are the things that keep us moving,” she said. “It may feel like baby steps, but when you look at the big picture, the progress is fabulous.”

And for the people putting in the work, like those presented with CityScape’s Beautification Awards, the big picture is what makes it all worth it.

“I have tremendous pride in my business and my home. I know there are many people in Youngstown who have that same level of pride and commitment,” Moon said. “People can have a negative view and that’s just not how things are today. Things are a lot nicer than we give ourselves credit for.”

Pictured: Theresa Moon, joined by her mother Mary Moon, was among the honorees at Youngstown CityScape’s Beautification Awards Tuesday night.

YOUNGSTOWN, Ohio – The YMCA of Youngstown has partnered with Denise and John York and The DeBartolo Corp. to match up to $9,000 in donations pledged for this year’s Giving Tuesday on Nov. 29. The pledges will help the YMCA…