YOUNGSTOWN, Ohio – Throughout her childhood, Sharon Grandberry had to endure physical and mental abuse from her mother.

“The physical was bad, but the mental abuse is what I carried in my life,” she said. “I was afraid. I felt like I was in a box, chained in there and I had no choices.”

Grandberry shared her story in front of 60 community members and public officials who attended the Sojourner House Domestic Violence Vigil at the First Presbyterian Church Monday as part of Ohio Nonviolence Week.

Those attending the vigil heard personal stories of violence from community members, and lit candles together in remembrance of those who lost their lives from violence and for the survivors who have suffered from violence.

“I walked away from my abuser 13 years ago and I will never go back,” Grandberry said. “What I will do in life is help people.”

Today, Grandberry is the certified peer recovery supporter at Compass Family and Community Services, which enables her to share her experiences with clients.

“There is hope. I don’t want anyone to think there isn’t life after going through any type of domestic violence,” she said.

The theme for this year’s Nonviolence Week is “Together We Can.”

“As a community we can come together,” Grandberry said. “We can intervene. We can show people that we care and it will eventually make them feel like they can come for help.”

After hearing Grandberry’s story, Karen O’Malia, board member of the Sojourner House, said it’s important for people to share their stories.

“When she shared her story, she was a strong advocate for people coming forward and sharing their stories and making sure they get help,” O’Malia said.

Malinda Gavins, program director of the Sojourner House Domestic Violence program, advocated for the community to come together to fight domestic violence.

Attendees at the vigil signed their names before leaving the church as a pledge to help end violence. Mayor Jamael Tito Brown shared his support for nonviolence week by urging the community to ask policy makers where they stand on domestic violence issues.

“We have to make sure the policy makers we elect represent our rights, needs and expectations,” Brown said. “A woman who does not feel safe in her house is not living in a home.”

In correlation with Nonviolence Week, Jeff Steinberg, director of Sojourn to the Past from San Mateo, Calif., spoke to sophomores at East and Chaney high schools Monday about what they can do to combat violence. 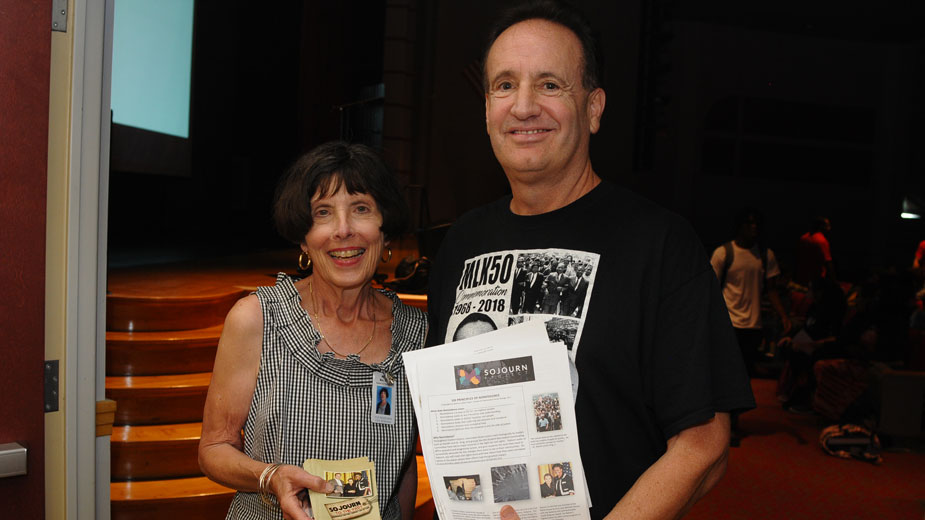 During the trip, students visit important sites in the Civil Rights movement, such as the motel in Memphis where Martin Luther King Jr. was shot and killed. Students also meet with individuals who lived through the Cvil Rights movement.

Among them are Minniejean Brown Trickey and Elizabeth Eckford, who were part of the Little Rock Nine, the group of African American students who were the first to enroll in Little Rock Central High School, an all-white school in Arkansas in 1957.

“It’s incredibly important for young people to do this,” Steinberg said. “And we don’t just take honor kids. This is for struggling kids as well, because when you meet Minniejean or Elizabeth Eckford, two of the Little Rock Nine, they’re all about the value of education. Elizabeth shares with them if you haven’t been good to yourself educationally, it’s not too late.”

Steinberg urged the students to think differently and not stand on the sidelines when it comes to violence. This could be using nonviolent words when speaking to one another.

“Language is a form of violence and we always have to be aware of that,” Steinberg said.

Asia Branch, a sophomore at Chaney, is interested in going on the Sojourn trip this spring.

“It was inspirational,” she said. “There were a lot of things I didn’t know about that’s not in our history books.”

Penny Wells, director of Mahoning Valley Sojourn to the Past and chairwoman of the Nonviolence Week committee, has been taking Youngstown students on the Sounourn trip for 13 years.

Nonviolence Week has been celebrated in Youngstown since 2010 when, at the request of Mahoning Valley Sojourn to the Past students, resolutions were passed by Youngstown City Council, the Youngstown School Board, Youngstown State University trustees and the Mahoning County Board of Commissioners.

The first nonviolence parade and rally, in 2011, was the idea of a Sojourn student, Janae Ward. At the request of Sojourn students, a “Nonviolence Week in Ohio” bill passed  both houses of the General Assembly and was signed into law in 2013 by Gov. John Kasich.

Wells has seen Sojourn students organize walkouts at their high schools and at YSU to bring awareness to gun violence, and one of her students who moved to South Carolina has reached out to officials there asking them to pass similar legislation.

“It’s the ripple effect,” she said. “You affect one and then it affects two. So they have had an effect on the community and broader, but it’s also changed their lives.”

The cost for each student to go on the trip is $3,200, but with Wells’ help, each Youngstown student only has to pay $600. Wells raises the remainder of the funds.

Over the last 13 years, Wells estimated she has raised $600,000 for students in Youngstown.

“We focus on nonviolence for one week, but we hope that people will incorporate the principals of nonviolence into their own lives,” Wells said. “We hope it won’t be just one week but that it will be broader than that.”