BOARDMAN, Ohio – There’s a feeling that comes during the holiday season when someone comes across the perfect gift and can’t wait to see the face of the recipient as they open it.

Then, the person finally opens it and absolutely loves it.

“You know how good you feel?” Diane Sauer asked Friday afternoon. “That’s how I feel about philanthropy.”

Sauer, owner of Diane Sauer Chevrolet in Warren, was among the honorees at the National Philanthropy Day 2018 Celebration, and received the Outstanding Philanthropist Award. Businesses and individuals were recognized in eight categories by the Mahoning-Shenango Chapter of the Association of Fundraising Professionals .

One is that the region is “truly blessed to have so many dedicated, generous donors,” she said. The other is there are many individuals eager to recognize and thank those donors for their philanthropic efforts.

Nezbeth is co-chairwoman of the AFP event alongside Landis Erwin, major gifts officer for Westminster College’s office of institutional advancement.

“The people you are going to meet today are all definitions of philanthropy,” Ssaid tan Boney, WKBN-TV news anchor and master of ceremonies.

When Boney first participated in the awards luncheon several years ago, he said he expected it would recognize wealthy individuals who give large sums to local causes. Alongside them, he found many honorees were doing good deeds for the community and raising money to benefit the causes they support.

The Valley Impact Award was presented to the Youngstown Foundation, which is celebrating “a century of philanthropic support to countless organizations and individuals in the Mahoning Valley” for the community, Boney said.

The individuals who provided the initial funds for the foundation “would be shocked “ to realize that their $33,000 investment had grown to nearly $120 million today, said Executive Director Jan Strasfeld.

“Back then, they were facing such hardships as the demands of war, a global influenza epidemic, food, fuel and housing shortages, and a volatile labor situation,” she said.

“Today we are sobered by such daunting issues as infant mortality, drugs, decaying infrastructure, climate change, safety, too many schools that don’t function properly, too may people who can’t get a foot on the first rung of the ladder of opportunity,” she continued. “We have plenty to do. “ 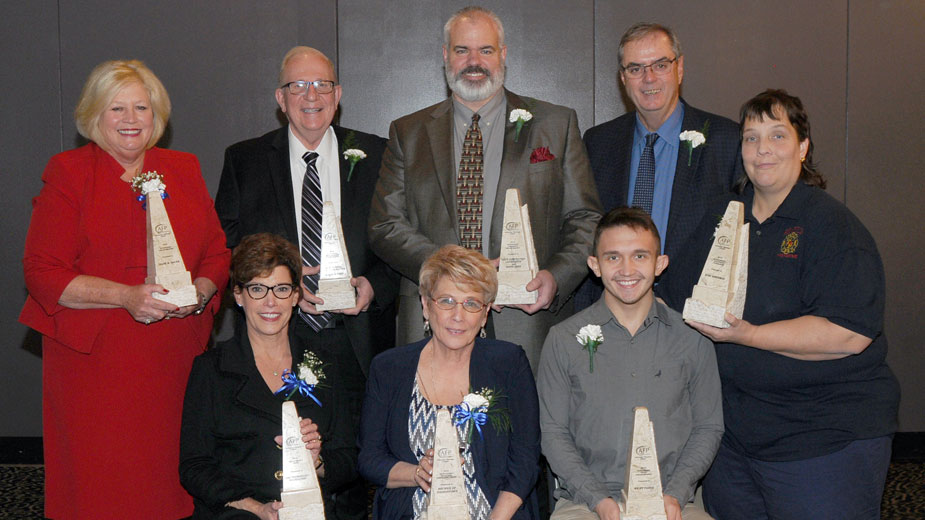 In the Outstanding Young Philanthropist category, Hubbard siblings Mackenzie and Ricky Pasco, offer “proof that you’re never too young to make a difference,” Boney said. The Pascos were recognized for their efforts to raise $72,500 to support granting local wishes through the Make-A-Wish Foundation.

The Pascos were each diagnosed with Common Variable Immune Deficiency, which renders them vulnerable to infection. Mackenzie Pasco was unable to attend because she was in the hospital because of an issue related to the condition.

Dealing with their condition has given the siblings an outlook on life most people don’t have, Ricky Pasco said.

“My sister and I don’t do what we do for the recognition,” he said. “We know how good it felt when we had somebody reach out to help us when we were down.”

In 1986, Lewis Construction founders Dennis Lewis Sr. and Carter Lewis established the Lewis Roberts Foundation to ensure the adoption agency’s financial stability. The agency was founded in 1978 by their sister, Barbara Lewis Roberts, to support school-aged children with physical, developmental or emotional challenges.

“Her mission was to find homes for kids who were previously considered unadoptable,” said Carter Lewis, Lewis Construction’s CEO. “She did it with passion and grace that we couldn’t help but want to make sure that she succeeded.”

Recipes of Youngstown, which started as a Facebook group created by Bobbi Allen of Youngstown, was recognized as outstanding Volunteer Fundraising Group. ROY, as Allen referred to the group, has published three cookbooks assembled from recipes shared on the social media site. Proceeds from the books support Lanterman’s Mill in Mill Creek Park, the Mahoning Valley Historical Society’s Tyler History Center and a scholarship fund for military veterans at Youngstown State University.

The members of Recipes of Youngstown are “dedicated to preserving the memories of their childhoods,” Allen said. “Each recipe reminds us of someone special or a moment in our lives we can enjoy over and over.”

She paid special note of the organization’s “original cheerleader,” Linda Kostka, who was with Mill Creek MetroParks when the first cookbook was published and now is at Mahoning Valley Historical Society as its development director.

“We could not have come this far without your enthusiastic support in the beginning,” Allen said.