LORDSTOWN, Ohio – It’s 8:30 a.m. in late July and more than 100 people are patiently standing outside a large, white, wooden barn.

When the doors open at 9 a.m. a large banner at the top of the entryway reads, “The Original Lutz Farms Sweet Corn.”

The crowd takes no notice as they hurry inside. They know why they’re there.

“This is the best sweet corn deal around,” say Ray Rubrake of Warren.

“When there are a lot of people here it goes very quickly. In two hours, it could be gone.”

Inside the barn are several large wagons containing about 250 dozen ears of corn each. As the edges of the wagons get picked clean, a worker uses a wooden rake to pull the ears back within reach.

“Bring ’em on down,” calls a customer.

“I hide all the good ones in the middle,” the worker replies with a laugh.

Most customers peel the corn to inspect it before they make their purchase, discarding the husks in nearby barrels.

Gregory Jones, here with his brother to purchase 15 dozen ears for freezing, says the inspection is unnecessary.

“You won’t find a bug, a bad spot. It is excellent sweet corn,” he declares.

Rhonda Shaffer, who came with her mother from Champion to buy 300 ears, remarks how happy they were to find such a small line when they arrived.

“Actually that’s not a bad line at all. I’ve seen it when it’s been out the driveway and down the road.” 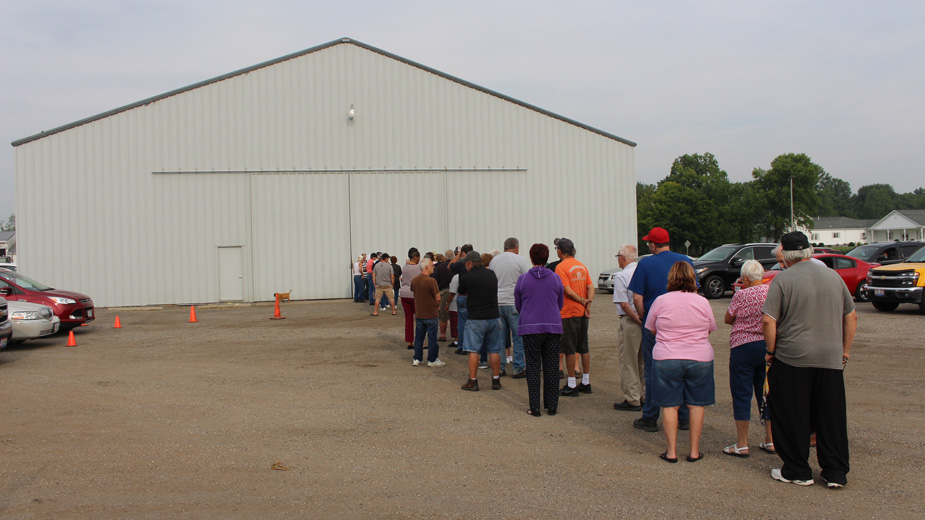 Pictured: The line to buy sweet corn at Lutz Farms starts forming well before the doors open at 9 a.m. Many are regular customers.

This is the 28th year that Lutz Farms in Lordstown has offered for sale its sweet corn. The corn is sold starting the last week in July and usually lasts five weeks. As of this writing, it is sold out.

This time of year owner Harvey Lutz starts his workday around 11:30 p.m., at which time he hops in his four-row corn picker and begins bringing in corn from the fields.

“After 11 or 12 at night, the dew starts coming down and the corn cools back off. It’s nice and wet and crisp,” he says. “If you throw corn in a heap when it’s like that it’ll keep all day.”

Lutz hires as many as 15 seasonal workers to help run the store and sort through the corn as it’s harvested. Bad ears are removed and given to a nearby farmer for cattle feed.

Any corn that isn’t sold that day is donated to local missions. “It never goes to waste,” he says.

But sweet corn isn’t as big or as profitable a crop as people often think.

The Iowa Corn Growers Association reports that only 1% of corn grown in the U.S. is sweet corn. Likewise, the crop represents a fairly small portion of his business, says Lutz. “Sweet corn is more of a summer-filler. It’s not our mainstay,” he says.

But it is a profit center that Lutz and his son would like to keep growing, as they look for more niche crops to complement their main products: field corn and soybeans.

The 31-year-old says farms like his family’s are facing significant challenges and it’s forcing them to get creative to stay profitable.

A few years ago the family started growing a special variety of field corn for the Three Rivers Energy Plant in Coshocton. “It had a special enzyme in it that they wanted just for ethanol,” John explains.

Growing corn to feed fuel stocks is a growing trend across the country.

Last year, for the first time, the majority of corn planted in the U.S. went to ethanol production, according to Iowa State University. And more than 98% of the gasoline pumped in the United States contains ethanol, says the U.S. Department of Energy.

Because it’s a niche product, it commands a slightly higher price than corn used for feed, John Lutz says.

“We’re looking to be a little bit different and maybe find that nickel or that quarter per bushel more that’s out there,” he says.

The Lutz family is taking a similar approach with their soybeans. The farm grows a special food-grade soybean used to make tofu, which gives it a higher price point.

It was for this reason Harvey Lutz decided to “gamble” by going all-in with soybeans this year and forgo planting any feed-corn. So far his bet has paid off.

Because he already had his crop priced with his buyer, and because it’s a premium product, he wasn’t hurt when China retaliated against the Trump administration’s steel and aluminum tariffs by placing tariffs on U.S. agricultural products that included soybeans.

“For a person who had a regular soybean crop, it’s going to bring them back to where they should be hopefully,” says Lutz.

Still, he admits the government subsidy does “make you feel like a welfare.”

According to the latest Farm Journal Pulse survey, less than 50% of farmers plan to sign up for the tariff aid at this time.

Harvey isn’t one of them.

“Sounds like Trump is going to kick in some money maybe for their screw-up, so to say,” he says. “If that goes on the beans, it’s even more favorable for my position.”

Recently another of Lutz’s attempts at diversifying drew lots of media attention, some of it national.

In April he proposed building a chicken farm on his property in Lordstown he was planning to sell to The TJX Companies for construction of a $160 million distribution center.

The project would require the land to be rezoned from residential/agricultural to industrial. So when it looked like the deal would fall through because of opposition from some neighboring residents, Lutz spread manure on the land closest to the houses to give them “a taste of the smell so they know what’s coming.”

The fate of the TJX project was decided yesterday. By a margin of about 3.5 to 1, voters upheld the zone changes .

Lutz says he’s not disappointed that he will never build a chicken farm on the 121 acres of land he owns in the village.

“No, they’ll have to go to KFC, I’m sorry,” Lutz offered in mock lament Tuesday night. “I’d just as soon be a buyer than a grower.”

A different challenge the farm is facing is pricing. To plant his crops, Lutz has to purchase seed, machinery and chemicals, all at retail price.

“It’s the only business I can think of where you buy at retail cost and then sell your product at a wholesale cost,” says the younger Lutz. “General Motors doesn’t buy tires for what we would pay for them at a tire shop.”

Keeping up with the latest technology is also a challenge for farmers today. While newer products have increased efficiency and made many jobs easier, they come with a hefty price tag.

“I call them bad investments because we only use them about one month a year. That’s what’s sad,” Harvey says.

But just because the farm may look different in the future doesn’t mean it won’t continue. Lutz Farm was established in 1918 by Harvey’s grandfather, John Henry Lutz, who raised dairy cows. It remained a dairy farm until Harvey Lutz took it over about 30 years ago.

Harvey Lutz hopes to soon hand the reins over to the next generation.

He says he’ll never push his kids into farming because “people should be able to do what they want to do. I thought I wanted to be an electrician.”

But he admits, it’s a seed that can grow strong roots without much maintenance.

“When I got out in the real world, I missed the farm,” he recalls.

“You work long days and it’s really hard work but it’s a lot of fun.”

Don’t Want TJX? How about a Chicken Farm?