Dancers Kick Up Their Heels at Y-Town Swing

YOUNGSTOWN, Ohio – Every Thursday evening at 9:30, retired construction worker Dave Mansel, 82, slips into his dancing shoes and begins his night by doing the Lindy Hop, just as he has done for the last 20 years.

Mansel is not the only one dancing. He is surrounded by people as young as 21, all avid dancers of the Charleston and the jitterbug, as they whirl away at Cedars West End in Youngstown.

“It’s very energetic and high-energy and the kids are all fun. They’re who keeps me young,” says Mansel, known as “Uncle Dave” to everyone who attends the Y-Town Swing nights, which began in 1997.

Every week, Y-Town Swing brings in a live band or disc jockey, some of whom have traveled from as far as Seattle, to play jazz and other music. The popular swing-dance styles seen on the floor were born in the 1920s, ’30s, ’40s and ’50s, says Shaun Rosan, Y-Town Swing organizer.

During its first two years, Y-Town Swing held its dances at Amy’s Campus 2000 near Youngstown State University, then moved to Cedars West End where it’s remained the last 18 years. After the original Cedar’s building was purchased, the group and Cedars moved to Steel Street on the West Side.

“It’s something you can go out to, bring your significant other, bring a friend, or go by yourself, and just have a good time,” Rosan says. “It’s one of the few places anymore where you can go into a room with a bunch of people and make a new friend every four minutes, with each song, without having to be Facebook buddies first.”

“We now have more of an ability to have bigger events and be a part of the community,” Darla Wilson says. Wilson has been running Y-Town Swing along with Rosan the last five years. Both have been Thursday night regulars nine years.

“We’re trying to do things like perform at festivals, or volunteer at nursing homes. And we’re also trying to have a meet-up event where people from Cleveland and Pittsburgh come to Youngstown and have a weekend of dance here,” she says.

The organization meets Thursday nights at 8 o’clock, beginning with an intermediate swing dance class, followed by a beginner swing dance class at 8:45, then a “swing dance social” at 9:30 when anyone can dance to live music the rest of the night. 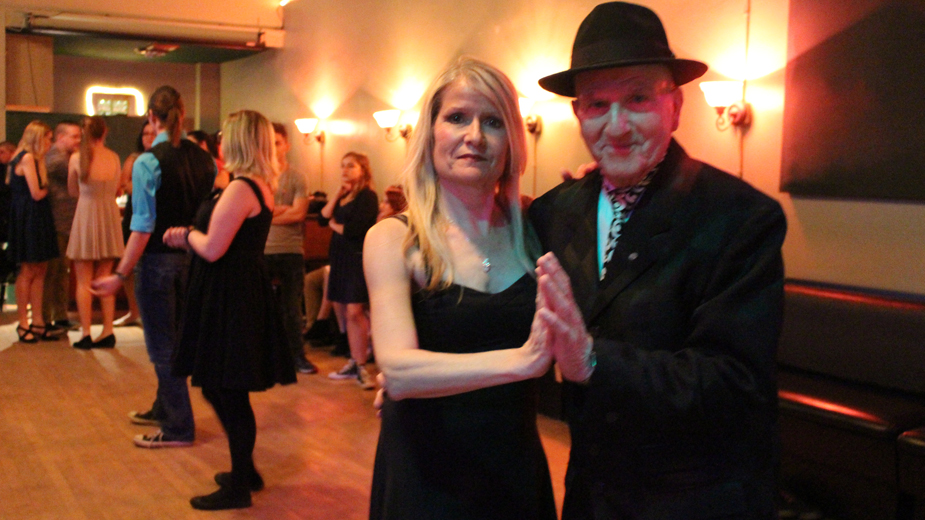 “The basic steps are very simple,” Rosan says, who occasionally teaches the lessons. “Within those 45 minutes [of lessons], you’ll have enough material that you can dance with us for that night.”

Adds Wilson, “If you can count to six, you can learn swing dance. And then from there, people can build upon that. If you do this at a wedding, you’ll be the best dancer on the floor.”

Kalyn Midkiff, who’s been coming to Cedars the last six years, says she’s learned everything she knows about swing dance simply by attending. “I was awful when I started,” she says with a laugh.

Others who joined the swing dance community learned how to dance elsewhere, but were looking for a place to continue dancing.

“I knew some people who had been here before and they recommended that I come here. And I’ve been coming ever since,” Greg Erb says. Erb learned swing dancing in high school, started attending Y-Town Swing in college, and has been attending seven years.

Asked what keeps him coming back, he responds, “The people are fantastic. There’s an environment of just really friendly people all enjoying a hobby together.”

Some who attend arrive in period clothing from the swing-dance era. Others wear modern-day formal wear. Still others come in shorts and a T-shirt.

“It just depends on what your comfort level is and how comfortable you are dancing in it,” Erb says. “There really isn’t a dress code. You just come however you want.”

Admission is $2 at the door to dance, with all the proceeds paying for booking the live music, members’ travels to other cities’ swing dances, and Rosan hopes, to invest in planning bigger events that will draw swing dancers from other cities to Y-Town’s Swing dances.

“The greatest pride I take from offering this experience to people is showcasing the city itself,” he says. “Getting people who aren’t from here, or maybe haven’t been here in a while, to come back and say, ‘Hey, there’s something fun to do. There’s stuff going on here. I should come back and visit more often.’ ”

Pictured at top: Darla Wilson and Jimmy Carter break down the dance steps for the Lindy Hop.