EOMAC Program Recipient of $5,030 of Donations

Proceeds from the inaugural 5K on the Runway, in the amount of $5,030, were presented to EOMAC Director Vito Abruzzino and Youngstown/Warren Regional Chamber President and CEO James Dignan at the chamber’s offices in Youngstown.

The event, which took place in July at YARS and the neighboring Youngstown Warren Regional Airport, garnered more than 125 participants and was organized through Youngstown Air Reserve Base community council members Marcy Angelo and Cathy Moore.

In addition, the Mahoning Valley Mustangs, a charter regional group from the Mustang Club of America, donated $500 raised at its Can Am event in June, when five local Mustang clubs shared a long weekend cruising around in their Mustangs, followed by a banquet in which they raised the funds. The group toured YARS during the event, and all members were highly impressed. 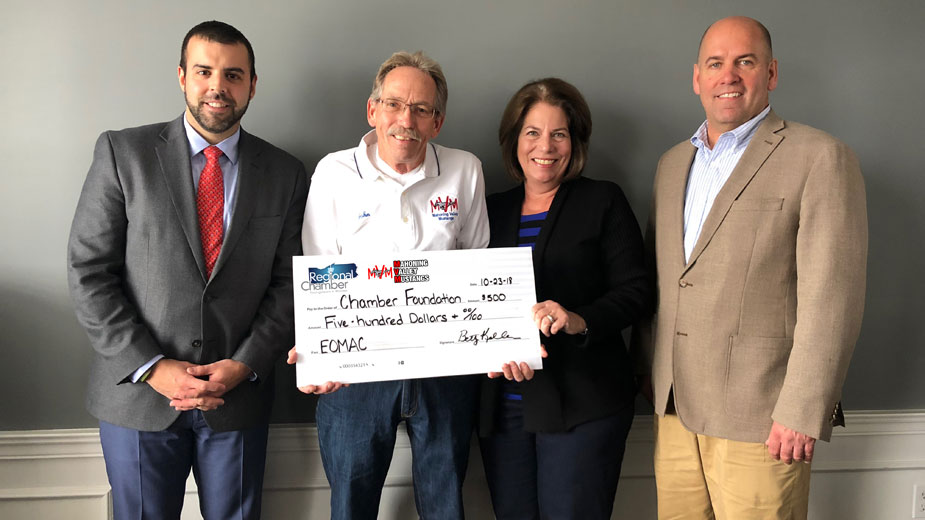 John Keller, regional director of the Mahoning Valley Mustang Club, said, “We decided to give back to YARS and EOMAC to show our appreciation and support.”

The Regional Chamber launched EOMAC in 2015. The commission is a member of the Association of Defense Communities and part of the Ohio military commission network, with peers around the state, including Task Force Lima, Toledo Military Affairs Commission, Ohio National Guard Association and Dayton Development Coalition.