Inside Union Hall, GM Announcement ‘A Shot in the Gut’

LORDSTOWN, Ohio – Almost every day for more than 50 years, a Wolikow has walked through the doors of the General Motors Lordstown Complex to build whatever the Detroit automaker was pumping out of the plant.

Following in his father’s footsteps, Tommy Wolikow started at the plant part time in 2008 and was hired full time in 2013. Four years later, on Jan. 20, 2017, he was laid off for “the third or fourth time.

“We were hoping it’d just be a short layoff like the ones I’ve been through before. I held onto that hope for a long time. Today’s a sad day,” he said outside the UAW Local 1112 hall Monday morning after news came out that production of the Chevrolet Cruze would end March 1.

“My father, this whole time, has been telling me, ‘Tommy, GM Lordstown’s not going to close down. It’s too important of a plant. Just hang in there,’ ” he continued. “Today, when he got home, I showed him the news and he was devastated. He couldn’t believe it.” 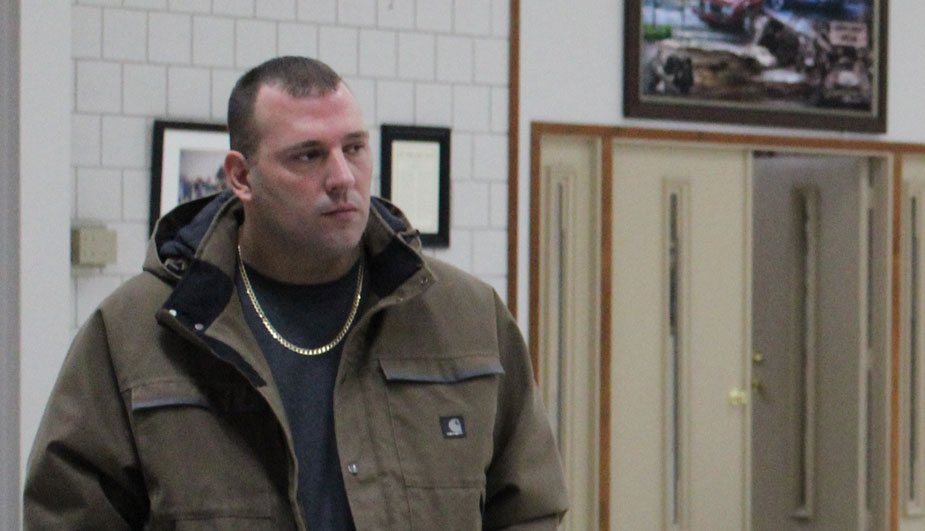 Tommy Wolikow, a second-generation GM Lordstown worker, said his father was in disbelief that the plant is being idled.

That sort of reaction seemed common. After talking with GM representatives at the plant this morning, Local 1112 President Dave Green said he spent about an hour talking to workers on the last remaining shift before heading to the union hall for the press conference.

“It’s a shot in the gut. Nobody’s excited. Nobody was happy. Everyone’s concerned. There were people in tears,” Green said. “It’s frustrating. … This is terrible timing, not just for our members but for the entire community.”

Beyond the news coming out in the midst of the holiday season, Green noted that it comes just a couple of weeks after an announcement that the Kmart distribution center in Warren – represented by Local 1112 – will be closing early next year. He also mentioned the closing of area retailers like Sears and Toys R Us.

Meanwhile, U.S. Rep. Tim Ryan pointed out the announcement in June that it would build the new Chevy Blazer in Mexico on the same day the second shift at GM Lordstown came to an end.

“It’s been tough with the third shift, the second shift and now the last shift. It’s very disappointing, too, with the way General Motors has handled this whole thing a couple days after Thanksgiving,” said Ryan, D-13 Ohio. “We’re already getting texts from friends and people we work with that are connected to the plant and losing their job. Your heart goes out to them. It’s a few weeks before Christmas. They’ve got kids. It’s just a bad, bad time to make this announcement.”

In total, about 1,500 workers at GM Lordstown will be affected by the closure. Beyond that, there are also UAW workers at local suppliers such as Magna Seating and Jamestown Industries that will be affected. For every job at the plant, Ryan said, seven others in the area are impacted by it, a figure that doesn’t take into account the effect of workers who donate time and effort to their communities.

Some at the plant hold out hope that this isn’t the end for GM Lordstown. In a statement, the automaker said the “unallocation” of five plants, including Lordstown, were “proactive steps” that are “expected to significantly increase capacity utilization.”

“They haven’t said we’re permanently shuttered. If they had said they’re closing it, then you’d be much more anxious,” Lordstown Mayor Arno Hill said. “They said they’re ceasing production. I don’t think it’s a play on words.” 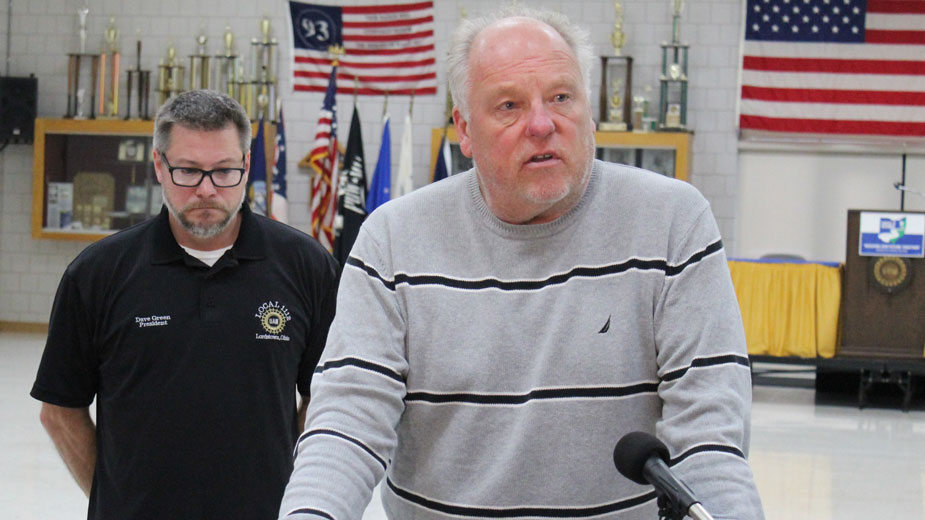 Lordstown Mayor Arno Hill says the village is prepared if the plant closes.

Production of the Chevy Cruze will also be stopped March 1 at the Ramos Arizpe Assembly plant in Mexico, which builds the car for international markets. In addition, assembly plants in Detroit and Oshawa, Canada, will be “unallocated.” Between the three assemblies and two transmission plants, about 6,300 factory workers are to be laid off, alongside the 8,000 corporate employees that the automaker also announced Monday would be laid off.

“I’ve heard of idle status and closed status. I’ve never heard of nonallocated status,” Green said. “We’re not the only plant in this category today so my guess is GM will want to see what location they’ll put product in. I want to make sure Lordstown is that place.”

Part of that effort, he said, is continuing the Drive It Home campaign, launched last week in support of the plant. Among those taking part are officeholders on both sides of the aisle at all levels of government, the Youngstown/Warren Regional Chamber, UAW Local 1112 and business owners.

“We’ll step it up. We’ll continue to travel throughout the state. There are more than 30 parts suppliers who provide parts for our product. Those communities are impacted as well,” Green said. “We’ll just keep letting the company know we’re ready for the next product. We want to make sure between [now] and our contract talks in September, that they know we have the workforce, location and we’re ready to build the product that takes GM into the future.”

That effort is just the latest made to show General Motors that the community and plant workers will do what it takes to save the assembly complex. In January, the two UAW locals merged under the banner of 1112 at GM’s request to smooth out negotiations, while politicians have met with General Motors CEO Mary Barra several times since the announcement that the second shift would be eliminated to make a case for the plant.

“The union has done about everything they can. We have to just keep a positive note and show General Motors that we want a product and we’ve earned a product,” Hill said. “If there’s anything they need, let us know and we’ll see what we can do to make it happen.”

Added Ryan, “You keep making the argument. They’ve had facilities like this they’ve kept idle for two, three, four, five years and then bring back online. We’ve got to keep hopeful and keep trying for these workers and the community. We’ll keep it up.” 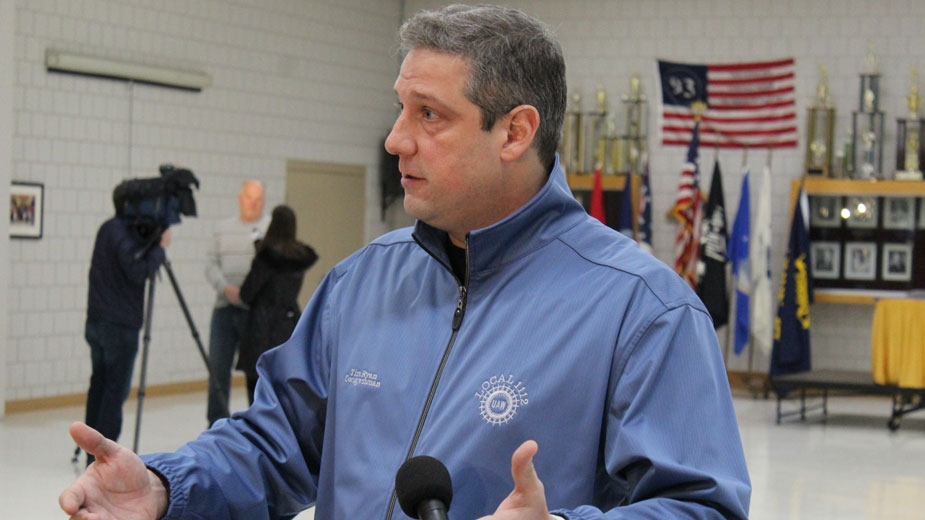 U.S. Rep. Tim Ryan said it was “a bad, bad time” to make the announcement.

At the same time, though, Ryan noted General Motors received federal support during the Great Recession and again last year with the passing of the Tax Cuts and Jobs Act. The selling point of both, he said, was that companies would invest money into their plants and workers as a result of the aid.

“Companies were supposed to put back into communities like ours and for the third time in a row, the theory has not worked. … Off they go with $2.[5] billion in profits just this quarter,” the congressman said, noting he talked to GM’s director of government affairs after the news broke.

“It wasn’t a pleasant conversation. I made sure he communicated back exactly what I said. I’m not saying anything to you that I’m not saying to them about the bailout and tax cut,” Ryan said. “This was all stuff that was supposed to light plants up around the country and now the whole country is being hurt by this.”

Ryan pointed his finger at President Donald Trump, who made several promises about restoring the Mahoning Valley’s manufacturing sector during his visits here during the 2016 presidential campaign and as president in 2017.

“We were relying on the president to make true on his promises during the campaign that he wouldn’t forget workers like this, communities like this,” Ryan said. “You’re the president of the United States who made promises to workers. You did well in this area because you promised you’d be different than Democrats and Republicans. And you didn’t lift a damn finger to help out. Stop the twittering and roll up your sleeves because this is happening all over the United States. He could have been maybe the only person who prevented this.”

Lordstown Mayor Hill, meanwhile, looked to trends in the new-car market, where trucks and SUVs are the most popular vehicles. While gas prices were high during the Great Recession, the Cruze and other small sedans were at the top of the sales chart. Cruze sales in the U.S. peaked in 2014 at 273,060. Last year, 184,751 were sold nationwide, the model’s lowest full-year figure since its launch in 2010. 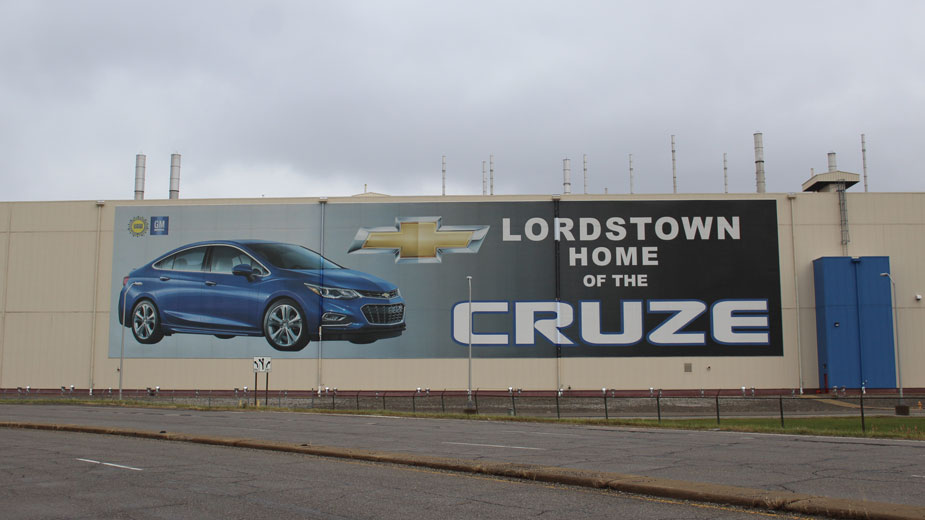 “Nobody likes to hear this. There’s no good time to make an announcement like this. But this – What are you going to do?” Hill said. “The car’s not selling. You can’t build product no one wants to buy. It’s not just a GM issue. It’s a Ford issue, a Chrysler issue.”

With the national contract between the UAW and the three Detroit automakers up next year, the time for Lordstown to prove its worth is now, Local 1112’s Green said.

“We just want a chance. We’ve proven ourselves, that we have the capability, the best workforce in the world. Our plant was rated as one of the highest producing in North America of all automotive manufacturers,” he said. “Our people work every day to protect customers. They don’t want a hand out, they just want to work.”

For Green and Hill’s optimism that things aren’t over yet, not all are convinced of the long-term security of the plant. Wolikow, who has been traveling as part of Good Jobs Nation’s Promises Broken Midwest Pickup Truck Tour to advocate for manufacturing jobs, said he’s hopeful for GM Lordstown’s future, “but the way things are looking, the writing’s on the wall and things don’t look good.

“With them not shutting down, of course we’re going to hope for new product,” he said. “I’m hoping everything we did ­– the Drive It Home campaign and pressuring President Trump and holding politicians accountable – is going to be for something.”

Pictured: UAW Local 1112 President Dave Green, at podium, was among those speaking at the union hall Monday.