YOUNGSTOWN, Ohio – In less than an hour, more than 200 years of Mahoning Valley history had come full circle.

Descendants of some of the earliest pioneers to settle in Youngstown and Mahoning County were on hand Friday to honor a homestead that is today recognized as the oldest continuously inhabited house in the city.

“For everyone who has done this – thank you from the bottom of our hearts,” said James McCollum, a descendant of both Joshua Kyle, who moved from Westmoreland, Pennsylvania and built the house at 1458 McCollum Road during the early 19th century, and John McCollum, the first settler in Austintown, whose son would eventually live in that same dwelling.

Public officials, educators, family members, and neighbors gathered at the end of McCollum Road in front of the Kyle-McCullom house on the city’s West Side to celebrate the unveiling of a historical marker sponsored by the Ohio History Connection. The marker, located near the base of the property’s long gravel driveway, explains the historical significance of the landmark house – a Federal style structure on nearly five acres bordering Mill Creek Park that was completed in 1813.

It is thought to be the oldest continuously occupied house still standing at its original location in the city, a designation uncovered by students and educators from the Youngstown Underground Railroad Research Team.

“He started building the house in 1796,” McCollum, now a resident of Mount Joy, Pennsylvania, said of Joshua Kyle, his great-great-great maternal grandfather.

The original part of the house stands two and-a-half stories high and is constructed with stone load-bearing walls that are two feet thick. Along portions of the exterior, one can still see the “putlog” holes where beams were inserted in order to support scaffolding used to build the house. 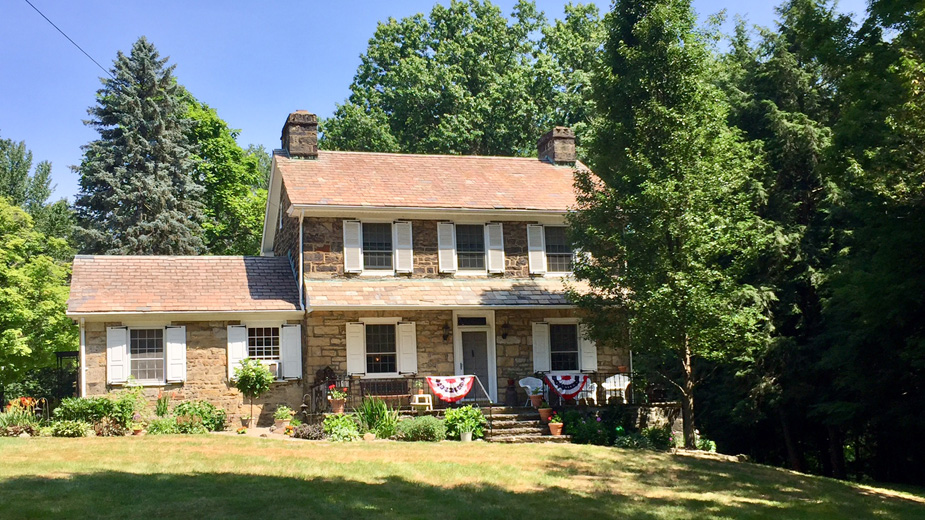 McCollum’s ancestor Ira McCollum married Joshua Kyle’s daughter Hannah in 1830, and the couple moved in to the stone house with her parents. “When they passed away, the property went to Ira and Hannah, and stayed with my father’s family until the early 1930s,” McCollum said.

His father was 16 years old when the property was sold to the Lewinsky family, who owned it for nearly 60 years. During this period, the owners contracted architect Charles F. Owsley to design additions that included a library, a new kitchen and garage.

Phil and Sylvia Imler purchased the house in the early 1990s and have embraced its historical value with open arms, welcoming researchers, students, and scholars who have helped establish the home’s place in the history of the Mahoning Valley.

“We’re greatly privileged to live here and carry on the legacy that has been left to us as caretakers of this home and these grounds,” Phil Imler, a former pastor, told guests. “How wonderful it is to be stewards of this home because it’s been such a blessing to so many families and people for more than 200 years.”

Ben Kyle, who represents the 10th generation of his family in Ohio, said he is the direct descendant of Joshua Kyle’s brother, John. While Joshua set up his homestead in the southern portion of what was then Trumbull County, John opted to farm in the northern area of the county.

“We’ve stayed there ever since,” Kyle, who lives in Hubbard, told the crowd. “We never knew about our connection to this house. It’s a neat thing to feel that we were here from the beginning and stayed.”

Mahoning Valley Historical Society Director Bill Lawson said the site is a symbol of physical resilience that has withstood the dramatic changes the region has undergone over these last two centuries.

The effort to recognize the house started in 2005 and was led by Penny Wells, a former Youngstown history teacher and director of the Youngstown Underground Railroad Research Team – a group of high school students and historians dedicated to uncovering potential sites used to harbor escaped slaves during the first half of the 19th century.

Their research could not turn up any solid evidence that the house was used for that purpose, Wells said. However, the students’ research led to documentation that revealed it was the oldest such house in the city, providing the foundation for the state marker.

“The students had a wonderful time going through the archives,” Wells said, along with pouring over court records and reels and reels of microfilm. “They immersed themselves in history.”

Local historian Vince Shivers credited the students who worked on the project. “I’ve worked on a lot of projects, but working with those students was something I’ll never forget.”

Students wrote the text for the historical marker, which will stand to help future generations of the community understand the importance of the house. All of those students involved with the project are today very successful in their professional lives, Shivers said.

“It gives students in the city schools an opportunity to learn firsthand,” said Jack Daugherty, a former student who worked on the project and is now the neighborhood stabilization director for the Youngstown Neighborhood Development Corp. “Every student that participated in this loved it and was inspired by it,” he said.