Theresa Lyons, a wound-care nurse at Northside, addressed those gathered, her voice shaking as she talked about the services and upgrades that will be lost when Northside closes Sept. 20.

“Anybody knows that it takes more than 17 months to turn around a facility. Seventeen months is a poor investment,” she said. “I hug and kiss every single patient I take care of. They love me, I love them. And I am sad to say to them that I can no longer provide you the excellent care that I am trained to do from the Cleveland Clinic.”

“We were blindsided by this news,” she said. “To hear this news is a surprise to us.”

When Steward took over ownership in May 2017, Hornberger said employees “were very excited by the potential for growth.” She disagrees “that Steward made the necessary steps to attract doctors and patients to the hospital.”

In a letter to Northside employees, Linda Grass, interim president of Northside Regional Medical Center, said that despite continued investment, Northside “remains significantly underutilized — as it has been for many years.” As patient visits increase at other hospitals in the area, Northside’s have decreased 71% over the last decade, leaving 80% of beds empty nightly, she wrote.

Hornberger argued that the elimination of services contributed to the patient reductions. Under Steward, Northside has closed three units, eliminated outpatients to receive blood transfusions, reduced pharmacy nighttime hours and the auxiliary staff that provide help for the nurses, and increased the patient-to-staff ratio, she said. Many of these services were directed to Steward’s Trumbull Memorial and Sharon Regional hospitals, she added.

The area won’t see the full impact to health care services from the loss of the estimated 400 to 500 jobs for about a year, she said. The Youngstown General Duty Nurses Association is represented by the Ohio Nurses Association, and represents some 188 nurses at Northside Regional Medical Center, most of whom have more than 25 years of experience. The union has been in contract negotiations with Steward since April 2018.

Nurses agreed to two contract extensions, the most recent ending Sept. 30, and were ready to take another year-long contract extension that would have meant no salary increase, she said. “Effects bargaining” with Steward will continue through the last week of August and the first week of September, during which they will cover issues related to the closure of the hospital, she said.

“We wanted Northside to succeed for the community, our patients here and the people who call Northside home,” she said.

For Marcia Schiffauer, a Northside nurse for 35 years, the closure of the hospital means the next generation of her family won’t be born within city limits, she said. Schiffauer and her children were born at Northside. “I wanted to see my grandchildren born here. But that’s not going to happen,” she said.

“We have some of the best nurses here in Youngstown. We’re like family,” she said. “We have the skills and experience. We’ve seen it all and done it all. And we can stop a problem from happening. … We can save lives. That’s what we can do here and that’s all going to be gone.” 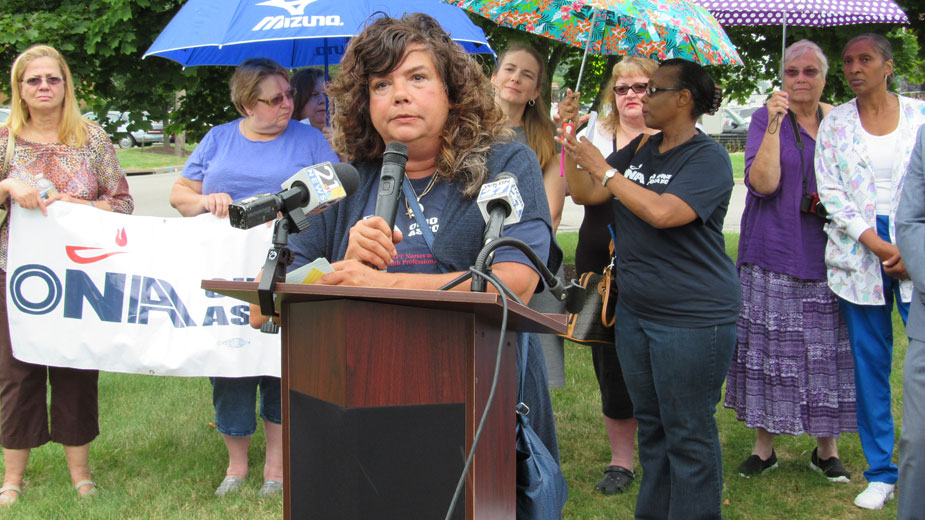 Marcia Shiffauer has been a nurse at Northside for 35 years.

Schiffauer fought back tears as she talked about wishing there was more time to find a way to keep the doors open, or even find another buyer. Closing Northside means closing the opportunity for the community to have a choice in a health-care provider, she said. Still, the nurses will continue to serve the remaining patients until the hospital closes its doors September 20.

Darlene Culver, a nurse at Northside for 39 years, said not having choice is detrimental to area residents as well as those who live outside the area who are sent to Northside for care.

“Many times other hospitals go on diversion and we get those patients at Northside Medical Center,” she said. “No longer will that happen because Northside won’t exist. What will happen to those patients now? Where will they go?” 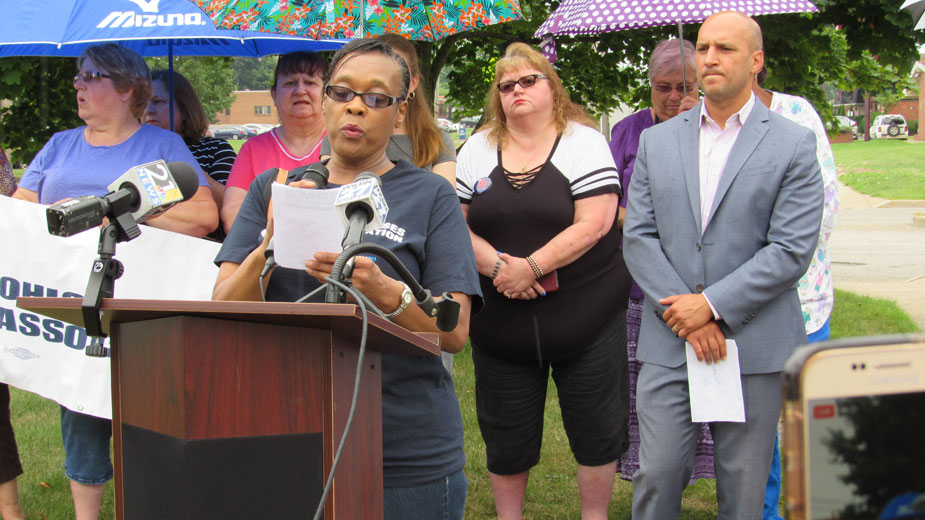 Theresa Lyons and Sen. Joe Schiavoni (background) listen as Darlene Culver, a nurse at Northside for 39 years, expresses concern for the patients.

Today, a patient told Culver, “I’ve always come to Northside Medical Center. Where am I going to go? What happens to me now? What choices do I have?” The patient asked who she could call to try to keep Northside open, Culver said. “We don’t have answers.”

U.S. Rep Tim Ryan, D-13, Ohio, told the nurses he’s “standing behind you during this difficult time,” he said.

Ryan said he had been in contact with Steward administration to discuss keeping jobs in the area and offering severance packages to displaced workers. Workers seem to “take the brunt of the challenge” in these situations, and it’s important to take care of “these workers who have dedicated their lives to serving other people in this community,” he said.

Ryan addressed the possibility of Northside being converted into a clinic for the U.S. Department of Veterans Affairs, something that President Donald Trump mentioned during a stop in Struthers in July 2017. And though “obviously, the president says things all the time that necessarily don’t translate into action,” Ryan said conversations have taken place internally about the possibility. He wants to speak to the local veterans community first to make sure it makes sense for the community, but affirmed that his priority in the short term is to take care of Northside’s workers.

“We always have in mind the mid and long-term impact of something like this. And I think talking about a veterans hospital should be on the agenda,” he said. “Step one is handling this situation appropriately; taking care of the workers. We’re going to make sure that if there’s a fair shake to be gotten here, that the workers get it.”

State Sen. Joe Schiavoni, D-33, said he has represented many of the nurses from Northside as an attorney.

“They do tough work. They put in the work every single day, don’t complain about what’s going on,” Schiavoni said. “They’re there to treat us and to help us. And so when I see the tears in their eyes when they come up and speak, it’s real.”

Schiavoni expressed his frustration with the continued conversation about “displaced workers” in the region and how to find livable wages for people who lose their jobs. The onus, he said, is on elected officials and community members to “hold Steward’s feet to the fire” in helping with that process.

“If they say they’re going to have two job fairs and place the 400-plus employees,” he said, “then we’ve got to make sure that they do that.”

State Rep. John Boccieri, D-59, acknowledged that Northside hospital had its ups and downs over the years, the difference, he said, is “there has always been a buyer on the back end.

“We’re really disappointed that this out-of-state, for-profit company is walking away without trying to find some sort of soft landing for the facility,” Boccieri said. “There is still a use for this facility.”

In addition to ensuring the displaced workers are taken care of, Boccieri said he is equally concerned for the care of the patients who are still in the hospital.

“Is there quality of care going to be disrupted or interrupted” he questioned. “My concern is about a path forward for both patients and workers in the coming weeks, and we hope that Steward will stay long enough to help with this transition.”

Steward has announced on-site job fairs for Aug. 23 and Sept. 6 to help connect employees to other Steward sites or medical jobs within the region. A Steward representative advised Schiavoni that the company will bring to the fair opportunities at seven hospitals, as well as dozens of other medical offices, he said. The goal, he said, is to ensure the workers aren’t making less than they were or lose their benefits.

“It’s not just about placement, but it’s about similar placement,” he said. “And for me and my office, that’s what we’re going to concentrate on.”

Steward administration assured Schiavoni that clinics and doctor’s offices will remain open at Northside, “and that they were going to potentially even hire on more,” he said. Another issue Schiavoni said needs addressed is the $900,000 in annual income tax revenue that the city stands to lose.

Health District Initiative to Improve Quality of Life for Residents

YOUNGSTOWN, Ohio — The city of Youngstown is hoping to address social detriments of health for residents by focusing on all four sides of the city and their unique needs. The Ohio Department of Health developed Ohio Health Improvement Zones…