YOUNGSTOWN, Ohio — The 41st anniversary of “Black Monday” was marked Wednesday with a proclamation that urges residents to embrace the city’s future, and not its sometimes troubling past.

“I recognize that if we don’t begin telling our own story, we’re going to continue to watch others tell it for us,” said event organizer Derrick McDowell and owner of the Youngstown Flea. “The best way to control that narrative is to reclaim our identity.”

Black Monday took place Sept. 19, 1977, the day that Youngstown Sheet & Tube Co. announced it would shutter its Campbell Works eliminating 5,000 jobs. The closure was the first of other major steel producers in the Mahoning Valley idling their mills, devastating the regional economy for decades.

But McDowell and others say while it’s important to recognize the impact of the steel industry in shaping the city’s heritage and character, it’s also time to put to bed the “Rust Belt” stigma that the city has shouldered since.

About 70 people gathered around the front steps of City Hall yesterday morning to officially proclaim Sept. 19 as Reclaiming Our Identity Day, formally erasing the negative connotations that Black Monday brings with it each year. 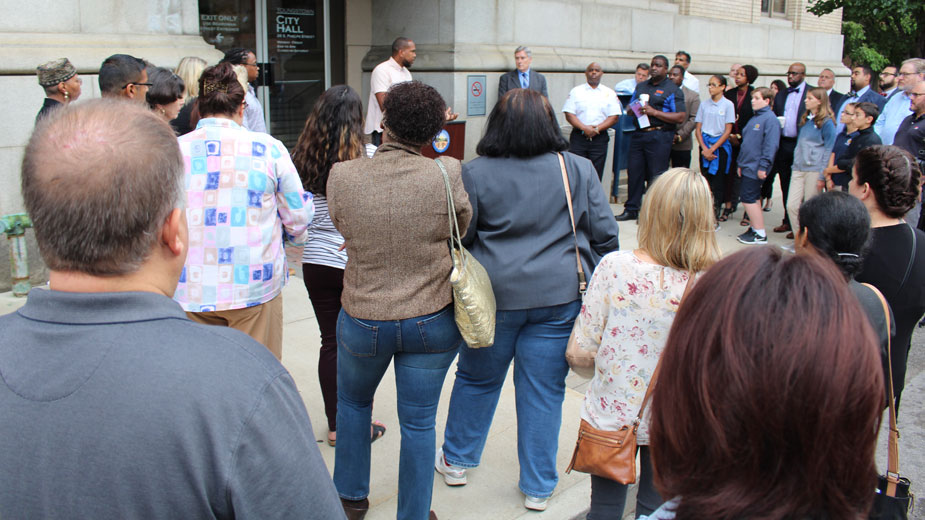 “That story began with the hopelessness and despair and the decline in our economy and our population. We focused in so much on that portion of the story,” McDowell said. However, the very pluck and resources that allowed the industrial economy to flourish during the first half of the 20th century still exist today, he says.

“The abundance of land, the river, the resource of people are all still here,” he said. “No longer are we going to tout the 60% of the population that left. We want to focus on the 40% that have stayed.”

McDowell said the event served as a “call to action” for the community that engages the public and private sectors, but most importantly young people.

“We want to go into the schools to let those children know that they are the future of this city,” he said.

“You can embrace the history, but you can’t dwell on it,” Brown said. “We have to live in the moment, and we have an opportunity to work on our future.”

McDowell and Brown both made remarks before the crowd, with Brown leading chants of “Youngstown Forward.”

“Events like this allow us to look back at the turmoil, but also to put it into the context of moving forward with gusto,” Lawson said. “There are a lot of good things going on. There’s a lot of vibrancy in this community. We still have a culture, institutions and places that are unlike anywhere else.”

McDowell said that the community lost more than its industrial base 41 years ago. Rather, it lost its sense of identity, which made it difficult to rebound from the severe job losses and shutdowns.

“We need to reframe and reshape the story we are telling ourselves about what happened to us,” McDowell said. “It is by that lens we need to wipe clean and see anew the same exact things those pioneers saw.”

YOUNGSTOWN, Ohio – The YMCA of Youngstown has partnered with Denise and John York and The DeBartolo Corp. to match up to $9,000 in donations pledged for this year’s Giving Tuesday on Nov. 29. The pledges will help the YMCA…