YOUNGSTOWN, Ohio – Even among the thousands gathered at the Covelli Centre for the 2018 Panerathon, Paul Gustovich of Niles stood out.

A green beard will have that effect.

Gustovich was part of the team representing the Austintown Panera Bread Bakery and Café, where he is a regular customer.

“I don’t have a beard all the time,” he said. When he does, if there’s some event going on, he colors it to draw awareness to the cause.

During Panera’s pink-ribbon bagel promotion this year, he dyed his beard pink. He had planned to do so again for the race, but an employee suggested green instead to match the color of the official event shirts. 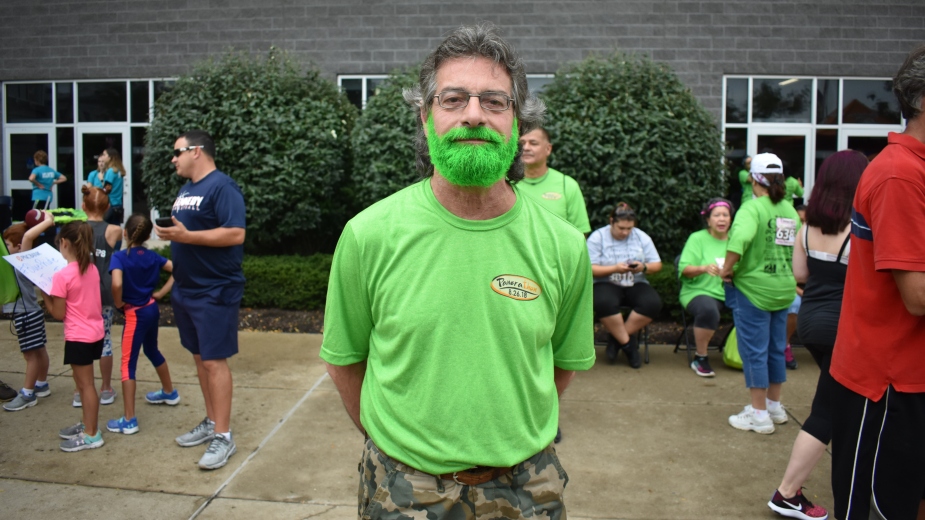 Paul Gustovich dyed his beard green to match the shirts for the 2018 Panerathon.

Gustovich, who retired from the General Motors Lordstown Complex after 30 years and now is a filmmaker, was among the more than 11,000 participants in the Panerathon 10K/2-mile fun run/walk Sunday morning. More than 1,500 youths participated in the seventh annual Fun Run. Participants defied the skies, which threatened a rain that never came.

“I think we’ve got a connection up there. Every year, the weather holds off,” said Sam Covelli, owner and CEO of Covelli Enterprises, which stages the event. The Warren-based company is Panera Bread’s largest franchisee, and it operates several O’Charley’s and Dairy Queen restaurants as well.

Around the 10 a.m. start, Covelli representatives estimated the event had raised more than $515,000, nearly $200,000 more than last year’s Panerathon. Additionally, the number of participants increased by about 1,000 from a year ago.

Over the past nine years, the event has raised more than $2.5 million for the Mercy Health Foundation to support the Joanie Abdu Comprehensive Breast Care Center. The center has performed more than 68,000 exams since its opening in 2011.

“I’m overwhelmed at how the community gets behind a cause like this and keeps it growing every year,” Covelli said.

Ashlee Mauti, marketing director for Covelli Enterprises, attributed the fundraising gains to an increase in sponsors, past participants returning because they enjoyed themselves in previous Panerathons and team fundraising. She also noted that online donations were still coming in Sunday morning.

People were still signing up just before the beginning of the first race, Covelli said. “We never expected as many people to sign up as they did today.”

Sweeney Chevrolet Buick GMC’s team numbered about 380 members, said its president, Doug Sweeney. He and his wife, Patricia, Mahoning County’s health commissioner, walked to the holding area for participants. The dealership has been involved with the event almost since the beginning.

“We’ve been blessed to be in this community for almost 100 years,” Sweeney said. “We have to give back. What a great opportunity to help people.”

The members of Team Sweeney, decked out in blue T-shirts, included employees of the dealership, family, friends and customers.

Numbered among Team Sweeney’s members were Brock and Michaella Jensen of Poland, who have a friend who works at Sweeney. The Jensens were joined in a carrier by their daughter, Anabella, 2, and a future sibling – Michaella is in week 38 of her pregnancy. 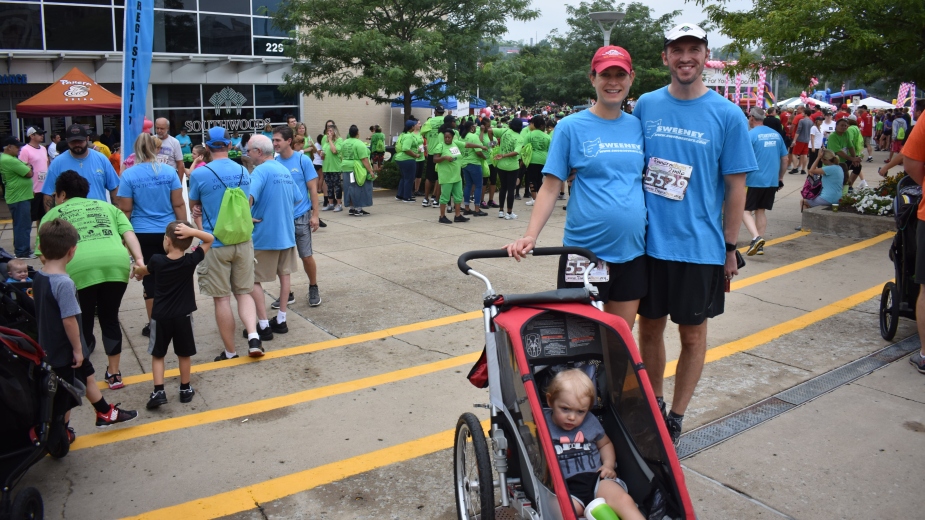 Michaella, Brock and Anabella participated in the Panerathon for Team Sweeney.

Michaella Jensen is a nurse anesthetist at Mercy Health’s St. Elizabeth Youngstown Hospital, where the Abdu Center is located. “We all know somebody who’s been affected,” she said.

“It’s just good to be out active and support a good cause,” said Brock Jensen, an exercise science professor at Slippery Rock University.

“This is our way of being involved in our community. It’s a really good event,” he said.

Participants included Dr. Rashid Abdu, the area surgeon who founded the center in 2011 in memory of his late wife. The Panerathon, he reflected, is a celebration of the community, cancer survivors, common values and common cause.

“It means everything that something that we have worked so hard for for many years, and now because of this loving community, especially the Covellis and Covelli Enterprises we are having this wonderful gathering,” he said.

“It truly is remarkable,” added Paul Homick, president of the Mercy Health Foundation. The response is “truly a testament” to the community and its generosity.