YOUNGSTOWN, Ohio – The rally last weekend in Lordstown and broad support from local officials and the community are among the factors that influenced the decision by TJX Companies Inc. to move forward with efforts to build a $160 million regional distribution center in Lordstown, public officials say.

In its announcing its decision via an email received shortly after 3 p.m. Friday, TJX said it would again move ahead with the project at the 290-acre site on Ellsworth Bailey and Hallock Young Roads. That prospect appeared all but dead two weeks ago when the company halted its application to rezone from residential/agriculture to industrial seven parcels in the face of opposition from a group of village residents.

Reached for comment Friday afternoon, Lordstown Mayor Arno Hill said his mood “couldn’t be better.” The company had contacted him shortly before sending its news release.

“They told me they had vetted many other sites, including ones out of Ohio, and also re-vetted many sites in the village, and this is the site they feel fits their needs the best,” Hill said..

Sarah Boyarko, senior vice president for economic development with the Youngstown/Warren Regional Chamber, described herself as pleased to hear that the company is moving forward with its efforts to rezone the property it needs in Lordstown.

Boyarko learned about the company’s decision via email shortly before TJX sent its news advisory. The chamber has worked with TJX for two years to land the project.

“That is the most appropriate property for them in our market,” Boyarko said.

“This is the best news we’ve had in this community in a really long time,” U.S. Rep. Tim Ryan, D-13 Ohio, said Friday afternoon at a news conference at the Eastwood Mall in Niles. Ryan learned of the decision from Hill just before being contacted by the company directly.

Ryan, joined by state and local officials at the press event, said he has been on the phone with the president of TJX as often as five times daily since the project appeared to be in peril a few weeks ago.

“The rally the other day [Sunday] was the real turning point,” the congressman said. “They needed to know that the community was behind them, and they saw a packed house in Lordstown.”

Throughout the rally, he was sending photos of the event to the CEO of TJX, Ryan added.

The rally “really brought home that we want them here” and “galvanized their decision” to reconsider the site and determine it was the best location for the project, affirmed state Sen. Sean O’Brien, D-32 Bazetta. O’Brien, state Rep. Glenn Holmes, D-63 McDonald, and Trumbull County Commissioners Frank Fuda and Dan Polivka joined Ryan at the news conference.

“When we talked to the company today, they said the rally was one of the major factors that helped change their mind,” O’Brien said.

Ryan hailed the team effort from leaders through the community. “That’s really our advantage, that you can pick up the phone and get every major official here,” he said.

“I would assume they don’t go a lot of places where the congressman is involved in economic development project,” he added. “That helped a lot.”

In an email responding to a request for comment, Kathy Dickson, representing Residents for the Right Project on the Right Property, said her group is “extremely disappointed” with decision of TJX to continue to pursue rezoning property.

“Village leaders should have put a stop to any industry coming to the village and looking at residential land,” Dickson said. There are at least three Industrial-1 properties or combinations of properties that would suit each of the company’s stated requirements, she said in the email.

Dickson’s email subtracted, without elaboration, one site from the four that the opposition group had long touted as suitable for TJX. That site presumably is the Ohio Commerce Center, which the broker for the property told Dickson and other opponents April 18 that land there would not be sold to TJX because the distribution center would not use the park’s rail lines. Another site opponents that claim would be suitable for TJX, the North Pointe industrial park, also does not meet TJX’s requirements, according to project proponents, given its distance from major highways.

The opposition group will oppose “this unfortunate re-zoning request throughout the entire process up to and including a referendum, if necessary,” Dickson said.

“Our numbers have been under estimated [sic] in the media and within the village,” she continued. “Village residents support TJX for the value it brings to the village, but don’t support re-zoning residential land, she said in the email. The chamber was wrong to suggest any of the properties were available for purchase as industrial sites.”

Dickson and her husband, Brett, live on a relatively affluent street that abuts a large wooded area that would serve as a buffer to the TJX project. Brett Dickson is the associate vice president of distribution and fulfillment at the nearby Things Remembered warehouse, 500 S. Bailey Road in North Jackson, which presumably would compete with TJX for skilled warehouse workers. The couple moved to Lordstown about two years ago.

Said Ryan of TJX, “They want to be good citizens. They want to be here. They were so gracious and generous with how they can possibly make this deal go down.”

He acknowledged re-zoning opponents’ right to petition for a referendum but “obviously we’re not going to be for that,” he said.

The information people received at the rally, such as that Lordstown schools stood to gain $250,000 in property taxes, “helped some of the people change their minds,” O’Brien added

“A lot of people don’t want a chicken farm next to their home, too,” he added, a reference to property owner Harvey Lutz’ threat to build a chicken farm on land he had optioned to TJX. 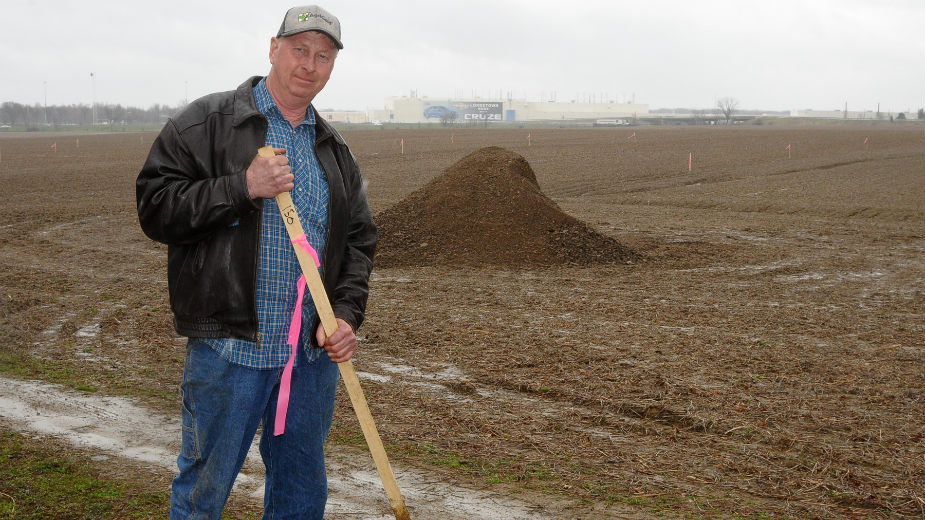 Trumbull County Commissioner Frank Fuda said he spoke the day before with a former opponent who now is in favor of the rezoning. “He had some questions about it at the meeting we had weeeks ago,” Fuda said. “He feels that the 1,400 jobs are important, and he knows it’s going to be an inconvenience.”

The chamber will provide any help it can to move through the re-zoning process “and everything that goes along with that, as well as a greater level of messaging as to what their specific plans are,” Boyarko said.