BOARDMAN, Ohio — Maj. Paul Moore and his wife, Maj. Sherrylyn Moore, have led the Salvation Army of Mahoning County for only two years. So when he learned that the organization was receiving a donation from Sweeney Chevrolet Buick GMC and its Operation Santa initiative, he didn’t know what to expect.

The Moores joined Sweeney, Germaine McAlpine, executive director of the Boys and Girls Club, and other Sweeney employees for a check presentation Thursday. The donation will help the Salvation Army “go over the top” and continue its services after the past Christmas campaign was “a little low,” he said.

“This really means a lot to have their support and to know that there are so many generous people in this town, so we’re so thankful for this,” he said. 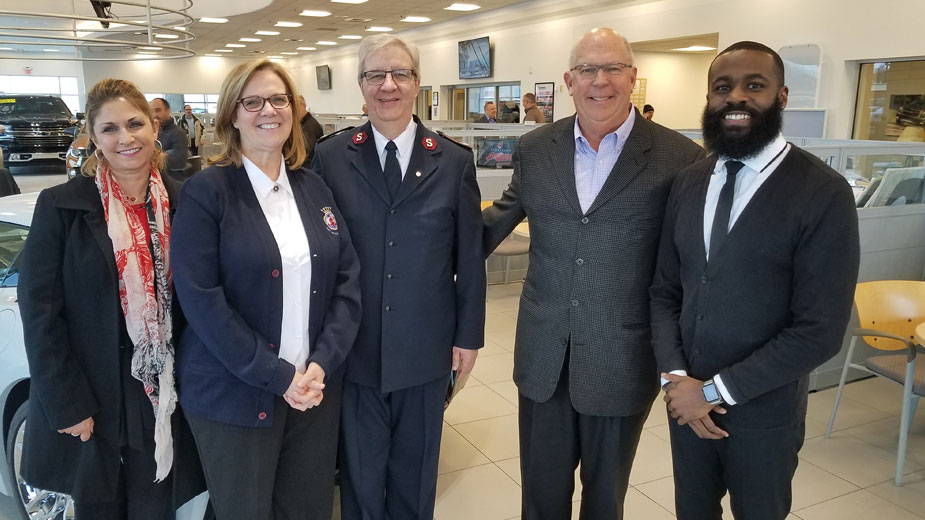 (From left) Nicole Kent-Strollo, chairwoman of the Salvation Army of Mahoning County and director of student outreach and support at Youngstown State University; Maj. Sherrylyn and Maj. Paul Moore, the Salvation Army; Doug Sweeney, president of Sweeney Chevrolet Buick GMC; and Germaine McAlpine, executive director of the Boys and Girls Club of Youngstown.

The Salvation Army serves people in need five days weekly, offering services such as access to a food pantry, financial assistance for clothing and utility bills, a program for senior citizens and providing free lunches to an average of 100 people daily, he said.

“It’s a very friendly, family setting,” he said. “We invite the people in, and they enjoy the fellowship of having people to talk to and having a place to sit and stay warm.”

McAlpine of the Boys and Girls Club also said he was surprised at the amount being donated. He and some of the club’s children were on hand for the presentation.

“I think that it was a good time for the kids to come out and interact with some of our sponsors and our supporters; the people who are invested in our club,” McAlpine said. “We thank Sweeney for their generous donation, because it is a community thing. Investments from our community into our youth is what’s going to make this city a better place.”

The donation will help fund the current after-school programs that the club is running, as well as the summer program, he said. McAlpine is looking to possibly expand programming to additional sites in the city to serve more students with tutoring, help with homework, academic games like Scrabble and Monopoly, a hot meal and some free time, he said.

Operation Santa runs annually from the middle of November through the end of December, Sweeney said. Recipients are chosen by a committee of team members at the dealership.

“We think that the different services that these groups provide are essential to making our community better in good times and bad,” Sweeney said. “We’ve been blessed to be here almost 99 years now, soon celebrating our 100th anniversary, and we’re honored to be able to give back to the community that’s given us so much.”

Across the street from the Chevrolet dealership, construction “is well on its way” at the new Sweeney Buick GMC dealership, he said. In November 2017, a microburst with wind speeds approaching 100 mph blew open the doors of the service department and ripped the roof off the building. Since then, the company has consolidated service department operations at the Sweeney Chevrolet dealership.

The new 40,000-square-foot dealership will house a new showroom and service department, as well as the headquarters for Sweeney Chevrolet Buick GMC on the building’s second level. It will be “even more customer-friendly” than the previous building, which was originally built in the early 1970s, Sweeney said.

Sweeney expects the company to be set up in the new building by the end of the year “or close to that,” he said.

“I think people will really enjoy the experience,” he said. “It’s always great to have a new facility.”

Pictured above: Doug Sweeney, president of Sweeney Chevrolet Buick GMC, joined employees and recipients from the Boys and Girls Club of Youngstown and the Salvation Army of Mahoning County for the Operation Santa check presentation on Thursday.