The BBB honored the four companies, a nonprofit and a community leader who exemplify trust, ethics and integrity, not just in their business practices but in “how they connect to the rest of the community,” said its president, Carol Potter. A commitment to those values is why Mahoning, Trumbull and Columbiana BBB has “the highest retention of accredited businesses,” she said.

“They’re really the fabric of this community,” Potter said. “Oftentimes you’ll see family businesses that started here in the 1800s, as we had today with White House Fruit Farm. And sometimes you see businesses coming back to join their families and create that business back here again. And that’s fun to see.”

White House Fruit Farm was honored along with Joe Dickey Electric Inc., RT Vernal Paving and Excavating, and Hively Construction Co. Inc. In addition, the BBB presented Torch Awards to the United Way of Youngstown and The Mahoning Valley and Sister Patricia McNicholas of The Ursuline Sisters and The Beatitude House. Area business and community leaders gathered at The Lake Club in Poland for the event.

Debbie Pifer accepted the award for White House Fruit Farm, which her parents David and Phyllis Hull took over from David’s parents in 1978. Under the second and third generations of the Hull family, the fruit and vegetable farm has become known for its homemade blueberry doughnuts and apple cider, and a year-round calendar of family-friendly events.

“It’s just so great in this Valley to have a history with your family,” Pifer said. “Wherever you look, there’s a family business. Sometimes you don’t recognize it. But I think there’s more family businesses in this area than most any other place I can think of.”

Rick Vernal, who founded RT Vernal Paving and Excavating in 1975 with his wife, Jody, is handing the reins of the company to his son, RT — after whom the company is named — and son-in-law, Evan Morrison. Passing the torch to the next generation of the Vernal family is “more amazing than starting the business,” he said.

“Starting the business is your dream,” Vernal said. “For your son and son-in-law to come into it, I think that’s incredible.”

As a full-service paving and excavating company, RT Vernal worked on many area projects, including Mahoning County resurfacing programs, Reserve Run Golf Course, The Links at Firestone Farms and the Lake Club’s recreation complex. He noted that he’s worked for or with many of the people in the room, and that maintaining a community of companies working together is important for the next generation.

“I think we have a shot at another spurt,” he said. “I see not a wave, but younger people trickling back into the area.”

Dave Dickey is the president and chief operating officer of his father’s company, Joe Dickey Electric Inc., which the elder Dickey started in 1957. Joe Dickey’s children were usually along for the ride on service calls, even during the holidays, he recalled.

Of the 550,000 manhours Dickey Electric worked in 2017, 300,000 were in Mahoning County, working with companies such as Gasser Chair, GM Lordstown, Exal Corp., Joseph Co. International’s Chill-Can plant and the new DoubleTree by Hilton in downtown Youngstown.

Company President Lee Hively Jr. introduced his family members who were present, including his mother who he said “played an integral part” in the founding of Hively Construction along with his late father.

“As being considered one of the leaders in the marketplace, I like to say that it’s quite an honor to be here,” he said. “Thirty-two years has come and gone awful quickly, but it’s been an awfully good 32 years.”

This year’s nonprofit award winner was the United Way of Youngstown and the Mahoning Valley, which has aligned its “focus, resources, partnerships and programs” around early childhood education and emergency services, Potter said.

The Success By 6 pre-Kindergarten readiness program impacted 693 students and their families last year, “and 99% of the parents surveyed believe their child is better prepared for school,” she said.

Success After 6 focuses on the whole child and family in an effort to close the achievement gap and provide positive enrichment opportunities. Last year, 200 students received new eyeglasses, 19,000 after-school meals were served and 64% of the students in the initiative’s report card mentoring program improved their grades, Potter said.

“A total 4,500 students and their families took advantage of Success After 6 in seven schools,” she said.

The United Way’s Imagination Library served 5,000 children under the age of five with nearly 163,000 books, and partnership with the Public Library of Youngstown and Mahoning County provided 1,000 students with educational opportunities and resources.

“The United Way of Youngstown actually has a four-star rating with Charity Navigator, which is the highest rating you can get,” she says. “Which means they are operating with transparency and they’re efficient, and they’re using ethics and integrity within their nonprofit.”

United Way President Bob Hannon accepted the Torch Award and thanked his board of directors as well as his employees. “We have an amazing group of people. They have passion and commitment,” he said.

He also thanked those gathered, many of whom he said are supporters.

“I look out here, most of you are supporters in one way or another,” he said. “And every other recipient up here today is a United Way Supporter.”

The final Torch Award of the afternoon went to Sister Patricia McNicholas of The Ursuline Sisters of Youngstown Ohio and The Beatitude House. She helped launch the Beatitude House Potter’s Wheel, which provides education and career preparation for low-income women.

“Her [McNicholas’] work to enhance our community and help those with the greatest needs has earned her many distinctions, including YMCA Woman of the Year, the Athena Award and the [Youngstown/Warren] Regional Chamber’s Nonprofit Professional of the Year,” Potter said. “It is now our honor and privilege to present Sister Patricia with the 2018 BBB Torch Award for Civic Leadership.”

McNicholas recalled a presentation by the late author and rabbi Chaim Potok, who described the experience of leaving his world for another, and experiencing a change as a result. McNicholas said she experienced her change by leaving a middle-class world for the world of the poor by taking a vow of poverty.

“Before the Beatitude House, I didn’t know the long-term effects of generational poverty on individuals and families,” she said. “Sometimes you hear the phrase, ‘Why don’t they get a job?’ The issue is often so much more complicated.”

She learned that small obstacles, such as a car breakdown, can set a poor family back. Knowing and living with the women and children she has come to serve remind her of two values associated with her vow, she said.

“The belief that the acquisition of stuff is not important, and a simple lifestyle can and often does lead to happiness,” she said. “Secondly, the vow of poverty calls me not to hoard my time and to be available to those in need. I have loved working with the staff and clients of Beatitude House, and have been enriched by those experiences.”

She believes that the Beatitude House can help people create a new future for themselves, “and as we try to embody that mission, we have been blessed by the support of so many. I know the people of this community care and respond with incredible generosity.”

In addition to the awards, the BBB announced the winners of its Ethics & Integrity Scholarship, which provides five $1,000 one-year, post-secondary scholarships to graduating high school seniors living in Mahoning, Trumbull or Columbiana counties. Applicants must be employed by or be the child or grandchild of the owner or employees of a BBB Accredited Business, and must attend a post-secondary school in the year immediately following graduation. 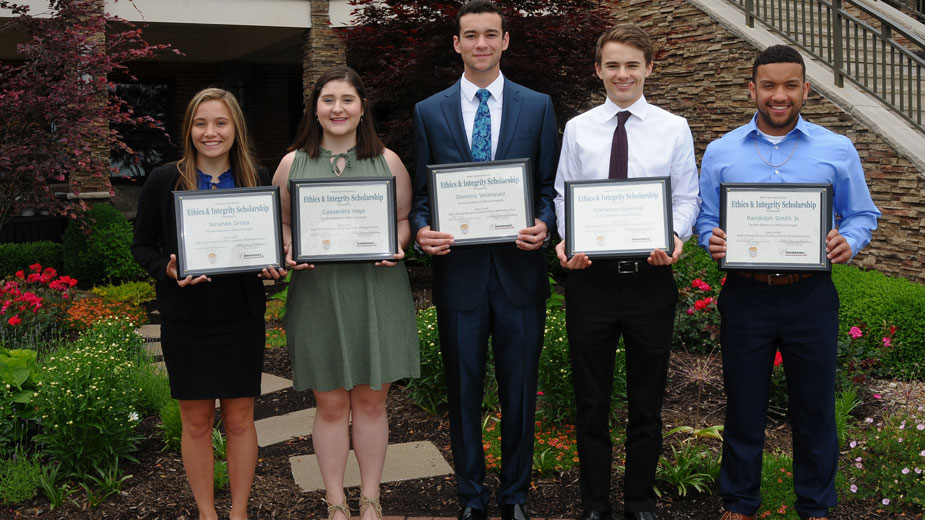 Before the award ceremony, those gathered watched a video featuring the BBB’s TrustBuilders, a group of six Valley banks that are committed to earning and keeping the trust of the public. Representatives of PNC Bank, Farmers National Bank, Huntington Bank, Cortland Bank, Home Savings Bank and Chemical Bank shared business success stories with some of their clients. The BBB worked with The Business Journal’s video department to shoot, edit and produce the video.

“When people talk about the revitalization of the Valley, today you saw the examples of why that’s happening,” Potter said..