CANFIELD, Ohio – Brick by brick, the Mahoning Valley Skilled Trades Expo laid a foundation of change – in perspectives, stereotypes and in children’s minds.

That was the goal of the Builders Association of Eastern Ohio and Western Pennsylvania. It also is a goal for The Business Journal’s Brain Gain: Building a Culture of Entrepreneurship and Workforce Develop program that seeks to find solutions to keep our kids from leaving the Valley.

Struthers High School student Eric Balderas, 17, might be re-evaluating some things after Thursday’s event at the Canfield Fairgrounds that drew more than 4,000 students from Columbiana, Mahoning and Trumbull counties, as well as Mercer and Lawrence counties in Pennsylvania.

“I was hoping to go to YSU for photography and graphic arts. I’m thinking a little about the trades now,” he said. As a boy, he wanted to be an architect, so when he visited the sheet metal and signage display at the expo, his creative mind kicked into gear.

“Today really piqued my interest in the variations of skills, jobs available and the amount of money I can make without having to go to college,” he said.

Other students at the event took part in learning the crafts of electricians, pipefitters, crane operators and more.

These are crafts of which 18-year-old Ryan Bedlion said built the United States. “A lot of people look down on the trades. They see construction workers on the side of the road and maybe just think the work is for low lives,” he said. “But these people are skilled and built our country, not the guys writing it down on paper.”

He smiles and shrugs before adding, “No offense to them.”

It’s a juxtaposition of a stereotype the event aimed to change. A position that many of his Maplewood High School classmates can relate.

“You don’t need to go to college to be successful,” Bedlion said. “Success is something you gotta find.”

He has worked in farming, learning about operating and fixing heavy equipment. The display that caught his attention at the expo was pipefitting: “I’m interested in field drainage.”

He wants to pursue a trade because he knows he can make money as soon as he graduates. “I want to make enough money so I can be a farmer,” Bedlion said.

He spoke with other students about the opportunities and said some are thinking about it after Thursday.

The Columbiana, Mahoning and Trumbull educational service centers and the Youngstown/Warren Regional Chamber were partners in the expo in an effort to expose kids – at younger ages – to employment opportunities in trade skills, which is facing a workforce shortage.

High school guidance counselor Barb Micco accompanied 40 Struthers High School seniors who attended the event. “I think it was a good event so kids can realize what’s out there if they’re not on a college track, or it might fit their needs,” she said. “Not every kid is going to college; and some who have a plan might get lost after a year or two. And I hope they remember this day.”

Micco explained that traditionally children begin searching for career paths in seventh or eighth grade. Guidance counselors then start helping to direct them to options in high school. She added that trades have been pushed for the past couple of years because of the industry’s need and income that can be earned.

It is a tradition that Arthur Daly, vice president of Eastern Gateway Community College’s Youngstown campus, and other manufacturing and technical skilled professionals want to change.

“We need to start exposing kids to manufacturing and trades earlier than high school,” Daly said. “We need to reach kids in middle school, if not sooner.”

Gauge Pettit, 16, has been working with his hands and learning about machines, electrical work and construction while he was growing up. His family has a machine shop at his home in Maplewood.

He thinks that events such as the expo play a larger role in helping children plot out their futures than meeting with guidance counselors.

“I just don’t like it when people make decisions for me,” Pettit said. His plans are to join the military after graduation and expand his learning. He enjoys a variety of skills, agreeing that he’s a jack-of-all-trades. His Maplewood classmates laughed and added, “and master of none.”

A majority said they want to remain in the area. But Rick Miller, 16, said he can’t wait to leave. It’s not the changing northeastern Ohio weather or even the local area, but the state of Ohio.

The University of Michigan fan said he just has a problem with the sports in Ohio. How did a boy from northern Trumbull County end up liking a rival college football team? “It’s a family thing,” he said.

Other students said hands-on experiences at the expo were “pretty cool,” but weren’t swayed enough to change their college plans.

While Raelin Gump, 18, of Struthers High School, thought the day was “a cool experience,” it didn’t change her plans to go to Mercy Health when she graduates, most likely to become a nurse.

“Pretty cool” was the response many children used to describe the Skilled Trades Expo.

Maybe “pretty cool” should be added as a subtitle for next year’s event.

The Business Journal thanks its headline sponsors. 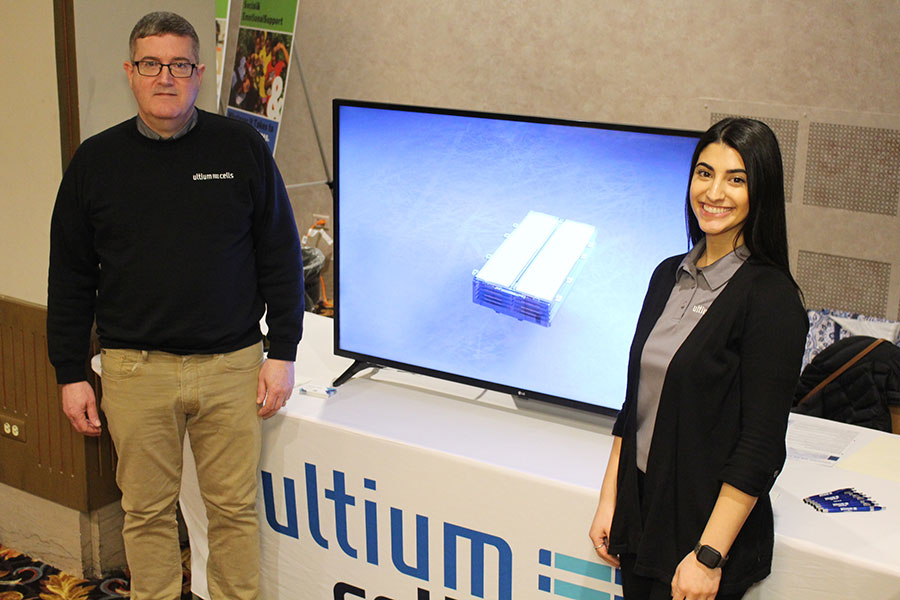 YOUNGSTOWN, Ohio – As companies struggle to hire, concerning themselves with headcount and just getting people in the door, effective onboarding strategies might be put on the back burner. Human resources professionals caution employers, however, about lacking an onboarding strategy.…

YOUNGSTOWN, Ohio — Mercy Health is hosting two hiring events for its St. Elizabeth Boardman and Youngstown Hospitals, as well as its St. Joseph Hospital in Warren. The first one is Saturday, Feb. 26 from 11 a.m. to 2 p.m.…