YOUNGSTOWN, Ohio – A bad score on the links can make for a frustrating day, but injury can put an end to most of a golfer’s season.

For amateurs and those who golf occasionally, the seasonal nature of the sport leads many to not keep up with fitness during the winter months, says Dr. Joseph DiDomenico, a chiropractic orthopedist with the Ohio Sports & Spine Institute in Boardman. As a result, the institute sees most of its golf-related injuries at the start of the season, he says.

“They’re not in the best golf shape and they tweak their back or sustain some type of injury,” he says. “Golf itself is a lot of stress on the lower back. Even at the elite, professional level, you see that commonly.”

Lower back injuries are the most prevalent, followed by shoulder and wrist injuries, he says. Older golfers typically experience disc injuries and pinched nerves, while stress fractures are more common among younger golfers, especially at competitive levels. Injuries rarely require surgery, but a permeated disc or pinched nerve can take a few months to properly heal, he says.

“Someone with a stress fracture in their back will take 6 to 12 weeks to recover,” he says.

Many golfers quit the game because of lower back injuries, says Damon McIntire. As a certified Titleist Performance Institute, or TPI, personal trainer with The Ohio Golf Academy and Learning Center at VSN Athletic Performance Fitness Center in Boardman, McIntire specializes in rotational sports.

“Believe it or not, golf is a vicious sport. …The torque on your spine is incredible,” he says. “There is a notion that golfers are not athletes. If that notion isn’t dead yet, it should be taken off life support.”

Sedentary jobs can create issues with rotation for amateur golfers, he says. For an ideal swing, 90 degrees of shoulder rotation and 45 degrees of hip rotation is needed, but “some players are nowhere near,” he says.

“If you sit at a desk all day, your hamstrings get tight, your hip flexors get tight and they just don’t work like they want to,” he says.

McIntire provides personal training for golfers of all ages and skill levels. Training focuses on mobility, stability, body awareness, balance and physical strength. After a 16-point screening, he prescribes simple exercises that can be done for 10 to 15 minutes daily, 90% of which don’t require equipment.

“People who come in two or three times a week will see improvements pretty easily,” he says. “You will see significant improvement in your range of motion.”

Cole Christman, 17, golfs for Boardman High School and has worked with McIntire for the past three to four months. Since starting the program, Christman has increased his physical strength, helping him to drive the ball farther. He drives 270 yards and up, he says.

“It’s a good regimen,” Christman says. “It really does help with strength.” 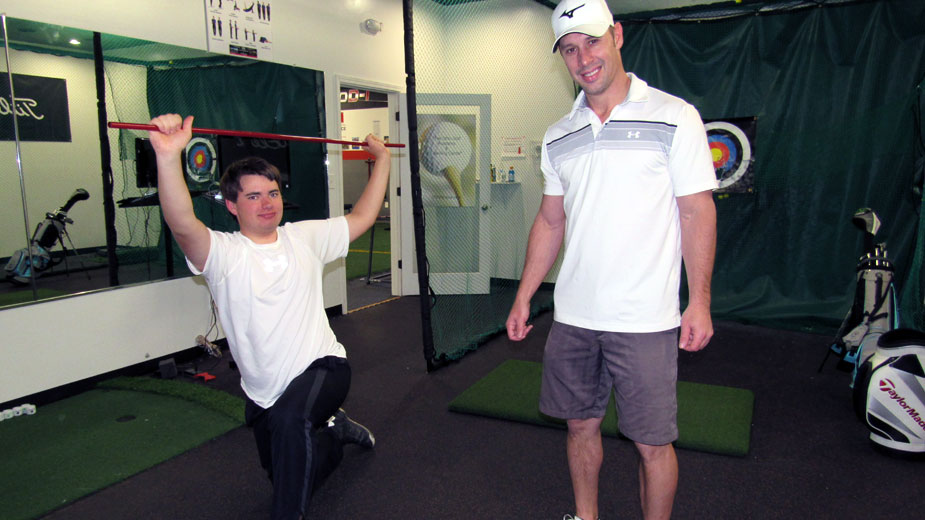 TPI training has additional benefits, McIntire says. Golfers who engage in the fitness programs enjoy improved quality of life, have more energy, feel better about themselves and are in better shape.

“A vast majority of my clientele just like to come because of the physical benefits,” he says.

The screening is the most important part of a TPI program, says Alison Zabel, business development manager at Muscle Connection in Boardman. Zabel and her sister, Stephanie Straub, the company’s operations manager, are TPI Fitness Level 3 certified. The screening tests mobility and stability, which are the two most important elements of a proper golf swing, Zabel says.

“Within that, we can see different limitations or strengths within the body and customize a fitness routine that would actually help your golf game,” she says. Issues can range from general muscular limitations to impairments as a result of past injury. Stiffness in the hips and glutes can also impede mobility in the golf swing.

“You have a lot of different movements that are going on there,” she says. “So, the lack of flexibility can also hinder the sequencing that you need for the swing itself.”

After identifying any issues, Zabel and Straub prescribe home exercises to improve flexibility, mobility and core strength. Keeping to an exercise routine year-round is important for preventing injury as well as maintaining endurance during a game, Zabel says.

“You’re out there for four, four-and-a-half hours,” she says. “You want to be able to perform as well as you did in the first hour as you do the last couple.”

In addition to exercises, Straub says equipment like the Inspire Fitness CS4 Cardio Strider can help strengthen a golfer’s glutes and core with minimal impact to the knees and ankles.

“Unlike an elliptical where you have your impact on your ankles or your knees, you’re just seated,” Straub says. “It’s great for the hips, the glutes … knees, ankles. It puts everything in line.”

The HumanSport equipment line at the YMCA of Youngstown’s Central Branch helps golfers improve core and overall strength as well as balance, says its director of health and wellness, Mary Fetkovich.

“You can start very basic, but can also move away from the pad or stand up to increase stabilization and work through your entire range of motion,” she says. “It benefits and strengthens individual muscle groups with outside stabilization while developing flexibility and stability.”