NEW CASTLE, Pa. – Tucked away at the back of New Castle’s Greenwood Cemetery, down a dirt path, is a large stone block. Surrounded by tombstones and American flags, it reads “In Memoriam. Lest We Forget. The Old Stone Church Graveyard.”

All around are graves, each adorned with a flag and a metal plaque commemorating the war each buried soldier served in. One is for John Moore, a drummer boy with the 1st Pennsylvania Regiment in the Revolutionary War. He was 18 when the war ended and died in 1842.

Moore wasn’t always buried here, though. Initially, the Old Stone Church cemetery was across the street from the Lawrence County courthouse. Plans were made to demolish the church and build a new road. The bodies were exhumed and moved in 1921, the building came down and the road was never built.

“If you drive past the courthouse, on the right side there’s a blank stone monument. It’s always been blank,” says Andrew Henley, a board member of the Lawrence County Historical Society. “Someone tried to raise money to put in memorial plaques and commemorate the church and the soldiers, but he died and the project fell through.”

About a mile away in downtown New Castle is a memorial to soldiers who died in the Civil War, the Spanish-American War and World War I. Fundraising for the memorial was started in 1891 by the Ladies Park Association. The granite was purchased in 1893 and the memorial was placed on the city’s central square in 1897. 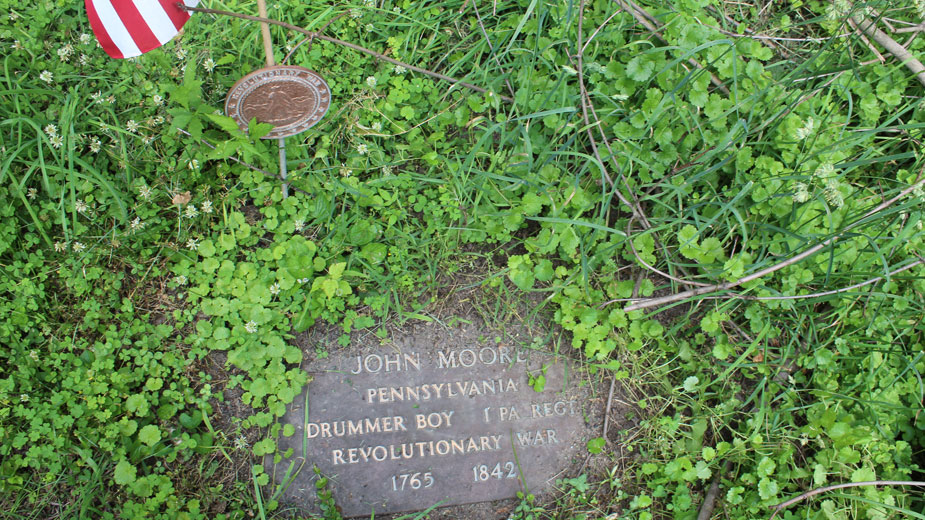 John Moore was among the Revolutionary War veterans buried in the Old Stone Church cemetery. The graveyard was relocated to Greenwood Cemetery in 1921.

The monument almost didn’t go up, though, explains Betty DiRisio, another member of the history society’s board. “The sculptor who constructed it threatened to sell it at a sheriff’s auction because he didn’t get all the money he was supposed to get,” she says. “It ended up going to two grand juries, who recommended the county pay the remainder of the bill.”

In the end, Lawrence County paid the final $1,500 for the memorial.

Spread across the county are memorials to veterans and the wars they fought in. Today, the county courthouse has a monument of its own that lists the names of locals who died in World War I, World War II, Korean War, Vietnam War, the 1982 Lebanon War and Iraq War.

Such markers can be found in downtown New Castle, in Mount Jackson, in Mahoningtown, in Slippery Rock Township, in Edinburg, in Enon Valley, in Pulaski and in Union Township. Most municipalities in the county have some commemoration to veterans. By DiRisio’s count, there are 15 monuments in the county.

She points out that during World War II, many neighborhoods put up memorial boards, listing soldiers who had left to serve. If they died, gold stars were placed next to their names.

“There’s not enough publicity about the memorials and there are so many here,” says Ginny Jacob, executive assistant for Visit Lawrence County. Last autumn, she published a blog post on the tourism bureau’s website highlighting many of the memorials in the county.

“One thing that stood out to me was how kept-up all of them are. There’s still a lot of pride in them,” she says. “It’s important that [those memorialized] aren’t forgotten. They were part of our communities and they always will be.”

On state Route 108 connecting New Castle and Mount Jackson is a monument to the men from the town who enlisted to serve in the Civil War. After arriving at Camp Wright outside of Pittsburgh, the group was inducted into Battery B, the 1st Pennsylvania Light Artillery. Over the course of the war, the unit fought at Gettysburg, Antietam and Chancellorsville, as well as 24 other battles. The memorial was built in 1912. 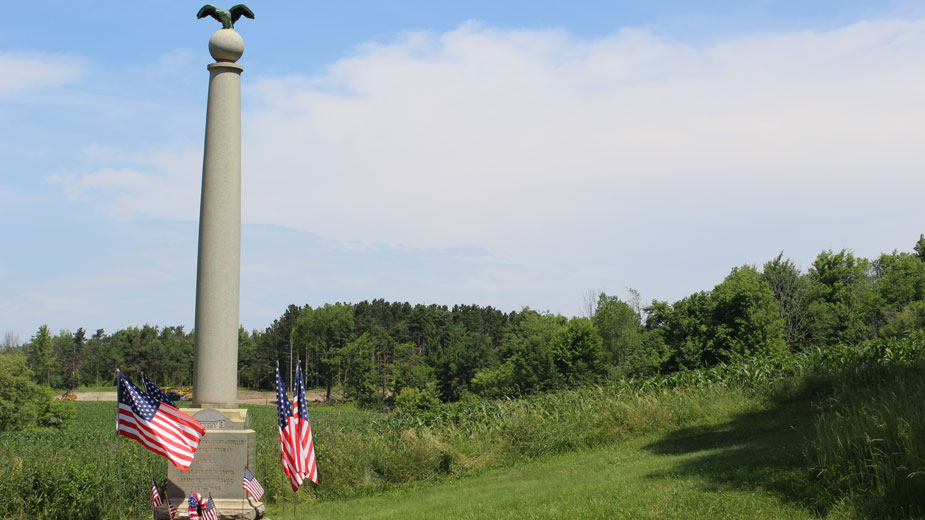 The Battery B Monument in Mount Jackson commemorates the unit that served in 27 battles in the Civil War, including Gettysburg and Antietam. Up a nearby hill, several members of battery are buried.

“The reason it was placed there is because at the top of the hill was a church where they signed up in April of 1861 to go off to war,” says Judy Foster. “And from 1869 to about 1930, they had reunions there and go down the hill to someone’s farm for picnics. There are some records that say there would be 1,000 or 2,000 people that would come to Mount Jackson on celebration day.”

One of Foster’s ancestors, Joseph Reed, fought with Battery B. By the end of the war, he had been promoted to sergeant. Adjacent to the memorial is a cemetery with grave markers noting service in Battery B and other wars, including one from the Revolutionary War and many from World War II.

But not all memorials in Lawrence County are on the beaten path. Several years ago, county commissioner Steve Craig began taking his Boy Scout troop into the game lands northeast of New Castle to take care of the grave of a Revolutionary War veteran.

“It’s past the middle of nowhere and then you keep going,” Craig says. “The county was divided into donation lands. When the government didn’t have the money to pay soldiers, they gave them plots of land west of the Alleghenies. This is land that he settled on and passed away on.”

Throughout the county, he continues, it’s these memorials – both big and small – that serve as a reminder of the sacrifices neighbors and families have made for their homes.

“It’s a way of connecting us to our past and the sacrifices our relatives and friends made,” Craig says. “When you read the names, those are the names of people you know.”

Pictured: The Civil War memorial in downtown New Castle was erected in 1897 and over the years added memorials to the Spanish-American War  and World War I.