WARREN, Ohio – On a summer evening when dark storm clouds threatened the 2,000-plus gathered at the Warren Community Amphitheatre, the weather managed to hold off so attendees could enjoy a rare opportunity: a live performance by world-renowned cellist Yo-Yo Ma in their backyard.

The evening was the final piece of a daylong event made possible by Arts Across America, an initiative by the John F. Kennedy Center for the Performing Arts to explore how the arts are used to enhance the quality of life, creativity and cultural excitement within smaller communities.

It was standing-room only for the free event, which drew crowds from across the region. Before the event, Ma made a special appearance at the Mahoning County Juvenile Justice Center in Youngstown, where he played a private performance for some 40 children and select staff members. He also offered some one-on-one instruction time, and delivered a message that resonated with Ahmareon, a 16-year-old who has been at the JCC since June 3.

Last names of the students and their parents were withheld per the request of center for privacy and security reasons.

Students spent two weeks learning about Ma’s history before his visit. Upon learning of Ma’s career, including playing for President John F. Kennedy when he was just 7, Ahmareon was “astonished that [Ma] wanted to come here to meet us,” he said. Ahmareon spends his free time writing poetry and rap lyrics about life in the detention center. Ma’s performance and visit inspired him to pursue his writing after he is released, he said.

“Some of us here, our emotions and decisions got us here,” Ahmareon said. “But [Ma] told us that music is another way to use your emotions where you can flourish your thoughts in a beautiful way that’s socially acceptable.”

Ahmareon’s mother, Niquaia, said she is grateful for her son’s opportunity to meet Ma and to hear his message. It’s an opportunity that the students at the center wouldn’t have otherwise had, she said, and it shows the students that they can turn something that they love into a career.

Judge Theresa Dellick, who attended a lunch and strategy session earlier in the day at the Butler Institute of American Art, confirmed that Ma’s message resonated with the students. Ma told students that had it not been for music, he was unsure how his life would have turned out, she said. He also taught them about forgiveness – for each other and for themselves – and sought to empower them, she said.

“Giving our students the right tools, environment and always providing hope brings out the best,” Dellick said. “These opportunities show them that the world is full of endless opportunity outside of the justice system.” 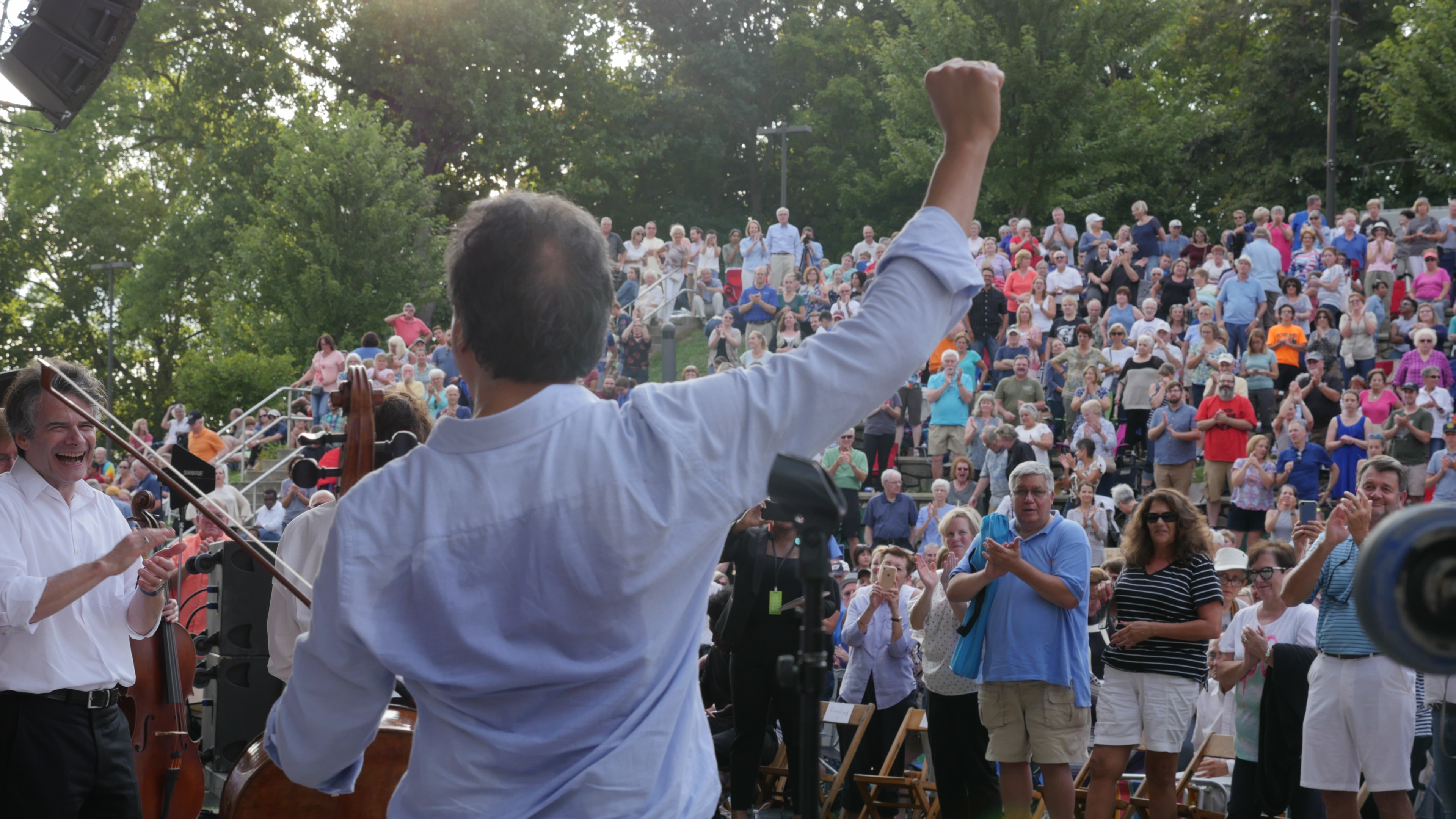 From there, Ma traveled to Warren for the day’s finale. Attendees enjoyed music from Darrius Simmons, a self-taught pianist born with just four fingers who has played at Carnegie Hall in New York City, singer Arielle Green who performed George Gershwin’s “Summertime,” as well as Howard Howell and The Point 5 Band, whose rendition of Stevie Wonder’s “Superstitious” got the crowd clapping along and Yo-Yo Ma dancing off stage.

Deborah Rutter, president of the John F. Kennedy Center for the Performing Arts, said the center has been observing for years the growth of Youngstown-Warren area’s arts culture.

“We chose to come to Warren and Youngstown to celebrate and understand what’s happening in your community,” Rutter said. “We’re very, very aware of how strong your arts community is.”

Tim Ryan, D-13 Ohio, recalls growing up in the Warren community and hearing stories of world-renowned musicians performing at W.D. Packard Music Hall and Robins Theater. With Ma’s performance coming on the heels of Florida Georgia Line at the second Y Live event at Stambaugh Stadium Saturday night, he said the community is turning a corner by attracting “world class entertainment.

“This has been the culmination of a 15- to 20-year plan” of investing in entertainment venues, including the amphitheater, and making efforts to “have the quality of life in this community that keeps young people here.”

The nearby storm clouds punctuated Ryan’s statement with a bolt of lighting that was close enough to get the crowd’s attention and elicit an enthusiastic response. 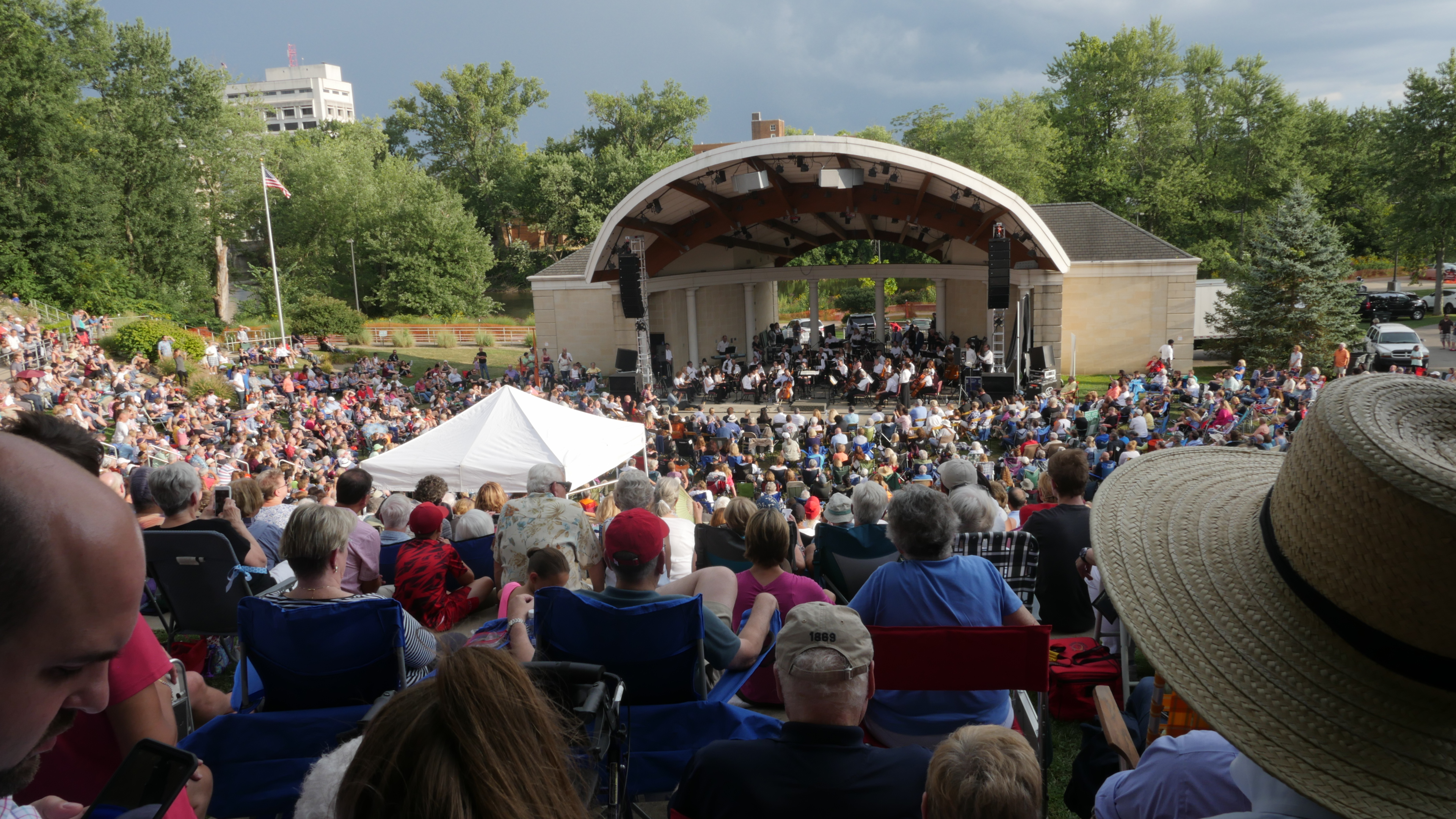 Susan Davenny Wyner, music director and conductor for the Warren Philharmonic Orchestra, introduced Ma to a standing ovation. Ma addressed the thousands in attendance and complimented the efforts made to preserve arts in the community.

“This is a dream come true,” he said. “You have been doing it for 100 years. You’ve helped build America – and you are helping to rebuild America.”

Ma played two selections from the unaccompanied Bach cello suites before taking his place in the orchestra’s cello section. The orchestra was made up of members of the Warren Philharmonic and the Youngstown Symphony Orchestra.

“That remarkable artist is joining our orchestra now,” Wyner said before conducting the group through selections that included Bach and Tchaikovsky. Randall Fleischer, conductor of the Youngstown Symphony Orchestra, took over to lead the orchestra through some recognizable selections, including Gioachino Rossini’s “William Tell Overture” and Edvard Grieg’s “In the Hall of the Mountain King.”

After the performance, Carmella Williams, director of diversity and inclusion at the Youngstown Business Incubator, introduced the panelists for the evening’s community forum hosted by City Club of Mahoning Valley. The forum was moderated by the Kennedy Center’s chairman, David Rubenstein, and included Barb Ewing, the YBI’s CEO, William Mullane, a board member with the Fine Arts Council of Trumbull County, and Dr. Lewis Macklin II of Holy Trinity Missionary Baptist Church in Youngstown.

The panel discussion was titled “How Can the Arts – and All of Our Culture – Serve Our Community?” 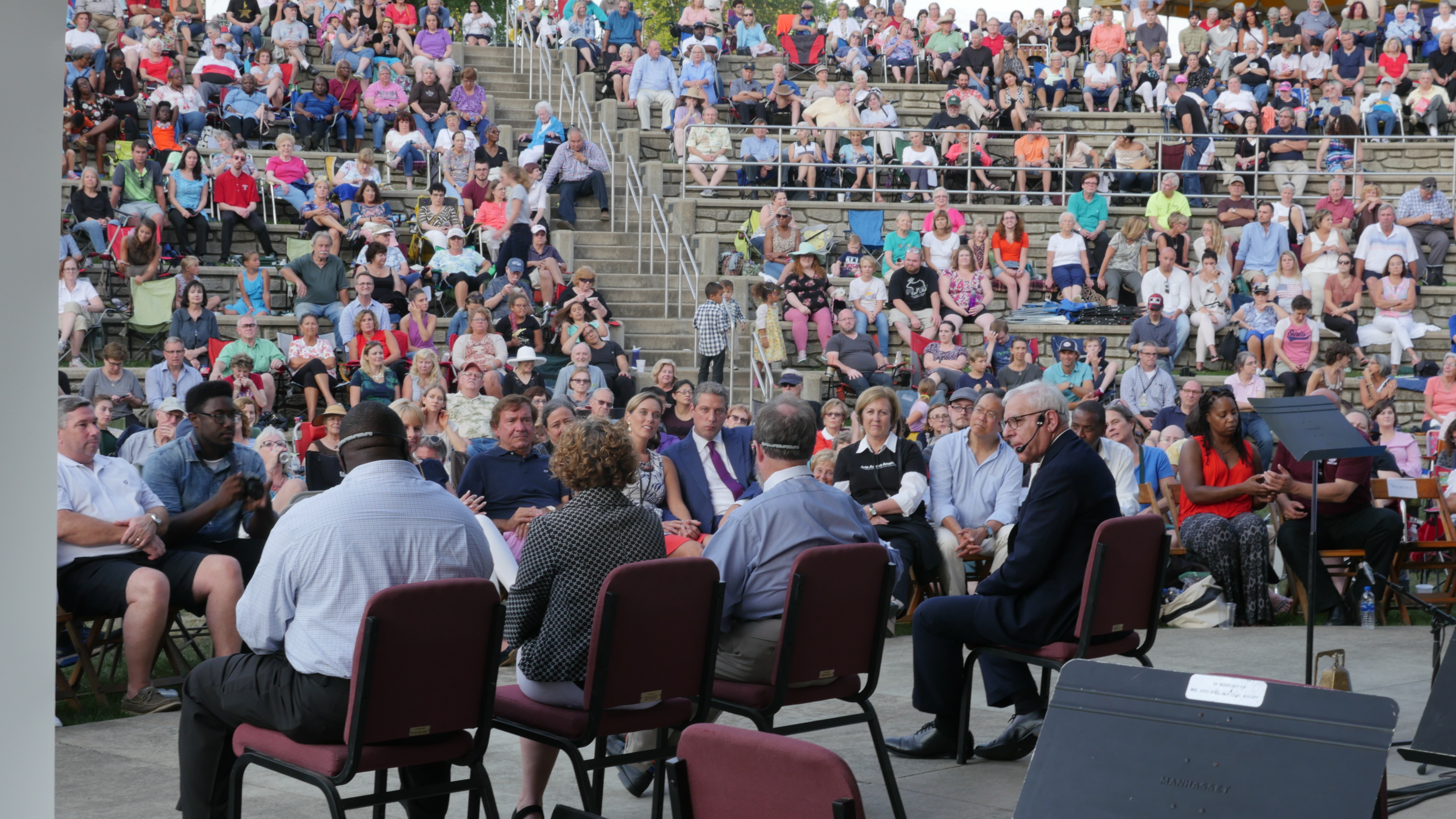 “Culture offers a source of creativity and connection,” Williams said. “It can help us to collaborate and find common ground to find solutions to issues facing our society.”

Mullane, who sits on the executive committee of Warren G. Harding High School’s Any Given Child program, argued the importance of maintaining arts curriculum in schools because of its impact in other areas of study. At Harding, the arts are integral to education “on every single level,” particularly in science and technology courses where students are expected to collaborate to find a solution, he said.

“Whether or not a younger person would grow to be an artist, arts gave them an opportunity to work with other people,” he said.

Mullane has known theater students who didn’t go on to pursue careers in acting, but used the skills gained in theater to become entrepreneurs and effective negotiators, he said.

“Arts support students by freeing up their mind to get them to higher levels of learning,” Ewing said. “It’s not just about what you accomplish that day, but giving them that backbone to become whatever it is they want to become.”

The ability of the arts to bring whole communities together helps strengthen the overall area as well, Macklin said. By creating a greater sense of “commitment and village” through the arts, residents are more likely to work together to address issues that impact the community, he said.

“The resiliency of our community is important,” Macklin said.

Funding remains the greatest challenge facing arts education, the panel agreed. And while state and federal funds exist, they can be difficult to attain, Mullane said.

Rubenstein reminded those gathered that the Kennedy Center began with a telethon. In 1962, famed composer Leonard Bernstein hosted the benefit for what would become the Kennedy Center – a benefit that included the debut of a 7-year-old Yo-Yo Ma, who played alongside his sister, Yeou-Cheng Ma.

President Kennedy always supported the arts and artists, Rubenstein said. And while many recall the late president’s “Ask not what your country can do for you” line from his 1961 inaugural address, Rubenstein said he preferred the end to that famous speech.

“With a good conscience our only sure reward, with history the final judge of our deeds, let us go forth to lead the land we love, asking His blessing and His help, but knowing that here on earth God’s work must truly be our own,” Rubenstein recited from Kennedy’s speech. “What you’re doing here, when you support the arts, you’re supporting God’s work on earth.”

Rubenstein encouraged attendees to support the arts by contacting elected officials to keep arts funding in the state and federal budgets. On the local level, it’s more difficult to find funds, Mullane added, but said residents can keep programs alive by purchasing tickets and attending events.

“If every one of you enjoyed tonight with Yo-Yo-Ma and the orchestra, you will still enjoy the orchestra” on any other night, he said.

“Culture is who we are. It brings joy to people and it can make the meanest of days be something special,” Ewing added. “You can cut budgets. But you’re not just cutting money. You’re cutting the fabric of who we are.”

As Youngstown builds its own amphitheater, Macklin said he doesn’t believe it will be competition for Warren, “but an opportunity” to strengthen the overall arts community between the two cities. 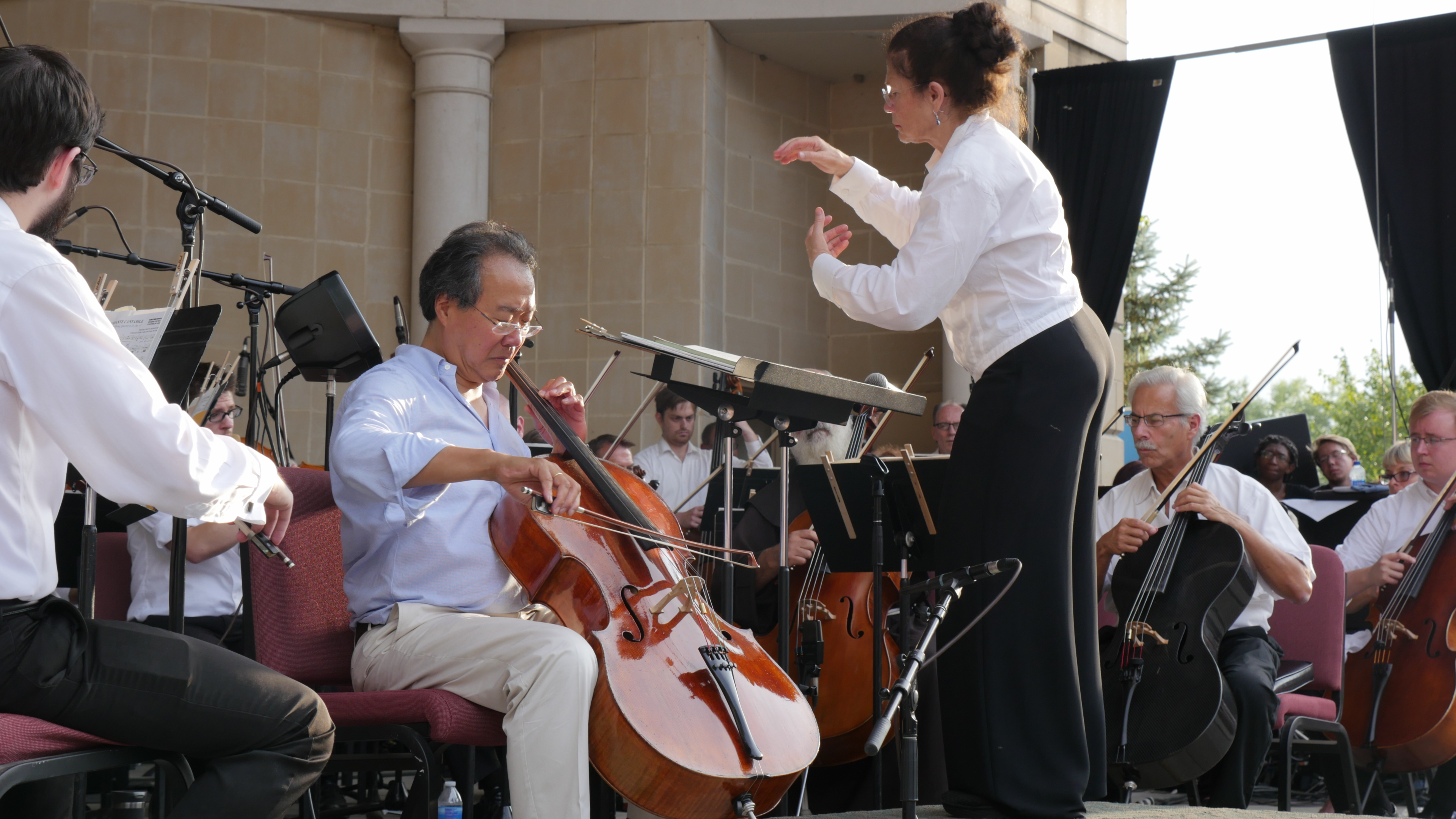 “We can continue to connect all these communities and all these opportunities to advance the whole community,” he said.

Strengthening the community ties and improving the arts and cultural aspects of the area makes the Youngstown-Warren metro area more attractive to both investors and past residents who moved away, the panel agreed.

B demonstrating a support and appreciation for the arts, it can impact the area’s economy in ways that weren’t thought of before, Mullane said. In the new economy, “individual entrepreneurs are becoming the core,” he said, and that includes artists.

“What we have failed to recognize is that we won’t always attract big business,” Mullane said. “But 1,000 artists who are supported are 1,000 jobs. That results in hundreds of houses being built.”