YOUNGSTOWN, Ohio – Julie Paine recalls meeting a woman who wanted to get a 3D mammogram screening for her breast. The woman didn’t have insurance or a doctor and while going through paperwork, she told Paine she had found a lump in her breast.

When Paine replied that they could find out if it was cancerous or not, the woman began to cry and said, “I don’t care that I have a lump in my breast. I care about the bill.”

“We live in a world now where we care more about the hospital bill than what is actually going on,” says Paine, health educator and community liaison for the Joanie Abdu Comprehensive Breast Care Center in Youngstown. “I gave her Joanie’s Promise and told her, ‘We’re going to cover it. We’re going to cover all of it.’ ”

Joanie’s Promise is a grant-funded program through the Mercy Health Foundation Mahoning Valley that provides breast care services at the Joanie Abdu Center for uninsured and underinsured women and men at up to 250% of the 2016 United States federal poverty level.

“If a person is a household of one and they make under $29,700 a year, they would qualify for Joanie’s Promise,” Paine says. “A lot of women here qualify.”

The program covers all diagnostic services, including mammography, ultrasound, image-guided breast biopsy, MRI and molecular breast imaging, as well as other barriers to care, such as transportation.

“We got her a ride to the center and started all of her diagnostics,” Paine says of the woman. “If we see a lump, you’re not leaving here until you know what it is. We’re not calling you back in a week. We’re taking care of it right now.”

Paine reports that 140 people have used the Joanie’s Promise service this year. The program is available to residents of Mahoning, Trumbull and Columbiana counties who are financially eligible. Since 2011, approximately 2,000 men and women have used the program. 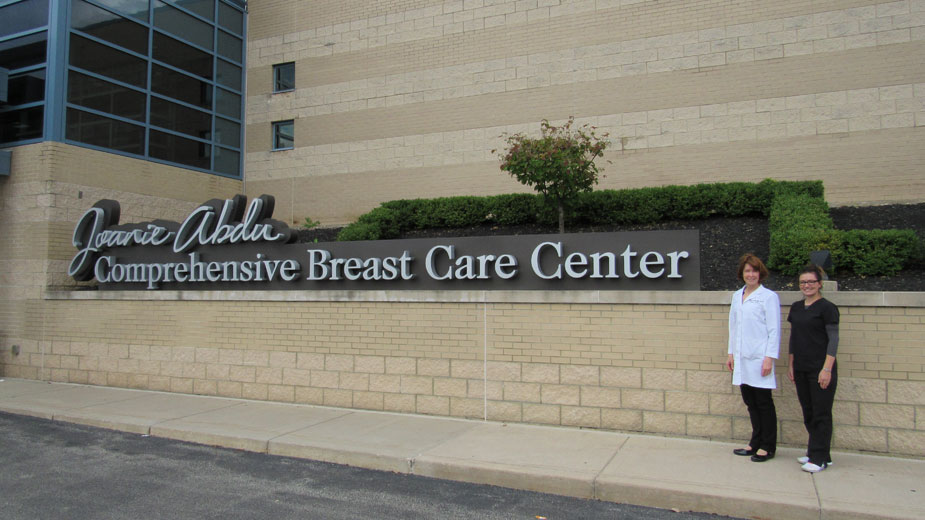 Joanie’s Promise was started in 2011, after Dr. Rashid Abdu opened the center in memory of his late wife, Joanie, who was diagnosed with breast cancer in 1993.

“It’s very important for everyone regardless of their income or economic status to get screened,” Abdu says. “The earlier you find cancer in your breast, the better chance of survival. At stage one you may get a 98% survival rate, while at stage four it goes down to 20%.”

The impact of Joanie’s Promise has taken time to become visible, but over the last three years Abdu says the center is seeing more stage one cancer compared to stages three and four.

“We have a feeling that what we’re doing may have some effect by alerting women to come early, have better treatment and have better outcomes,” Abdu says.

Held the last Sunday of August, this year’s event raised $515,000 for the center, which is nearly $200,000 more than last year’s Panerathon. Additionally, the number of participants increased by about 1,000 from a year ago.

Over the past nine years Panerathon has raised more than $2.5 million for the Joanie Abdu Center, says Paul Homick, president of Mercy Health Foundation Mahoning Valley.

“We have a tremendously generous community and every gift is so important,” he says. “We’re so grateful.”

Approximately $15,000 is allocated monthly by the Mercy Health Foundation Mahoning Valley to support Joanie’s Promise and equipment updates. The average reimbursement from Joanie’s Promise for 3D screening services is about $125, he adds.

Other investments for the Joanie Abdu Center, which the foundation has supported, were the purchase of the mobile mammography van in 2016 and the opening Sept. 19 of a $300,000 3D mammography-screening site within Mercy Health’s Poland Imaging Center.

The van and the Poland office accept Joanie’s Promise patients and bring breast-care services closer to those who don’t want to travel or don’t have the means to go downtown.

“The reason we have the mammo-van is so we can reach the unreachables,” Abdu says. “A lot of them have no education, no resources and some need transportation. So we provide all those things.”

In August, the van worked with 188 patients, Paine says, bringing the total number treated since September 2017 to 1,702.

The inside of the van looks just like the interior of the Abdu Center downtown, says Dr. Nancy Gantt, co-medical director of the center.

Since the van and Poland site are for screening services only, if a lump or something unusual is found in a patient’s screenings, the patient will need to go to the Abdu Center downtown for diagnostic services. If the patient doesn’t have transportation, Joanie’s Promise will provide a ride.

Once at the center, patients meet employees who will be working with them, such as nurse navigators, medical assistants and doctors, regardless of the patients’ ability to pay for treatment.

By TOM MURPHY and HALELUYA HADERO Associated Press Amazon is adding a prescription drug discount program to its growing health care business. The retail giant said Tuesday that it will launch RxPass, a subscription service for customers who have Prime…

YOUNGSTOWN, Ohio – One Health Ohio is launching a new program, Platinum Health, at one of its Mahoning Valley locations.  The program, which provides a comprehensive approach to health care by combining medical, dental, behavioral health, physical therapy and other…